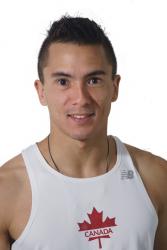 When you started competing in international competitions, did you see yourself being in the top-10?
No, I never thought I’d be able to make it into the top-10 in both disciplines (lead, boulder). I took every competition one at a time and was always blown away when I kept getting better and better results. When I made finals for the first time, then a podium, then finally a victory each moment is engrained into my mind and I loved every moment of it.
What motivated you to compete rather than just to climb outside?
I happen to climb a lot outside as well but I predominantly compete because there is always time to climb outside later in my career. To be able to compete at 100% is something you can only do very well as a younger athlete so I’m taking advantage of that fact right now!
What are some struggles you face as an athlete?
Sometimes it’s hard to jam all the competitions into one season. At heart I absolutely love competing and I wish I could compete in every competition in a year. Other struggles are financial ones. The climbing industry is still relatively small compared to other mainstream sports which means sometimes even the top athletes need extra help. I dream of climbing entering the Olympics and everything that comes with it!
What influenced you to start competing?
I have always loved competing and strived to be the best. I would say it was a self-driven mind-set that urged me to compete. I also get extra motivated to prove people wrong when they say I can’t do something.
Who most helped you get to where you are right now?
There are too many people to list who have helped me get to where I am with climbing. At the top of the list are my coaches, family members and friends.
What advice could you give to Young Athletes?
As a young athlete, you are shaping how people will perceive you in the future. Remember that being a good sport, congratulating competitors who have beat you and thoroughly enjoying the process of training and competing are all determining who you will be as a climber. For me, it wasn’t the most important to be “the best” but to have people really WANT you to win because you were a nice, great person. Climb because YOU want to do it, not because someone else wants you to. Don’t be afraid to say no and be aware of how your actions and words can affect people around you. Never stop having fun with climbing and always remember your core values. ​

Other sport
football
Hobbies
I love being on my computer, watching movies with my friends