MORI AND GRUPPER LEAVE IT LATE FOR EDINBURGH GOLD

Japan’s Ai Mori and USA’s Jesse Grupper both signed off the International Federation of Sport Climbing (IFSC) World Cup Series event in Edinburgh, Scotland, with seconds to spare for their second gold medals of the 2022 Lead series.

In what seemed like perfect symmetry between the men’s and women’s finals, the EICA:Ratho crowd not only had last gasp excitement to cheer, but they also had a home medal to savour as Toby Roberts made his first World Cup podium.

Coming back from a three-year hiatus to focus on study, Japan’s Mori Ai returned to action with a gold medal in Kopar, Slovenia just a few weeks ago. In Edinburgh, Mori proved it wasn’t just going to be a one hit wonder.

Mori had been climbing faultlessly all competition topping all four of the routes from qualification, semis and the final – but only just.

With Olympic champion and rival Janja Garnbret of Slovenia topping the finals route, Mori knew she had to equal that effort to take the gold, but with the knowledge she had the better semifinal performance under her belt to give her the edge if she did.

Another stellar climb came down to the very last second as Mori clipped at the top, and with it her second gold medal in quick succession.

Mori said: “I was feeling nervous before I started because I knew Janja had reached the top, and that meant I had to. But when I climb I just forget about my nerves and enjoy it.”

How did Mori know Garnbret had topped? “The crowd!” Mori simply explained.

Having been denied another gold medal by Mori, Garnbret still has quite the medal haul from the 2022 Lead season after medalling in every event. Her tally now stands at four gold and two silver medals.

Last on the wall to climb was Seo Chaehyun. The South Korean was another who had multiple tops to her name, but she just couldn’t carry that on to the end.

Making her way up the wall to hold 42, Chaehyun found a little resting place with over a minute left on the clock. By the time she felt she had had enough rest, her time was up. Reaching for the next hold was enough for a bronze however. The men’s final offered much for the crowd to cheer. Just like Mori, Jesse Grupper clipped in at the top of the route with close to zero on the clock. And, also like Mori, it was the American’s second Lead gold of 2022.

“I’m pretty ecstatic,” said Grupper. “After last weekend [in Koper] I definitely felt I was at a low point in competition climbing. I knew I still had it in me, and I have been training pretty hard. I am probably the most fit I have been all season and it feels so rewarding to feel that I am back.”

Grupper has confessed before that he can climb slowly in competitions, but Edinburgh was another level for stopping the clock.

With Grupper at a ‘low point’ in Koper at the last World Cup, Luka Potocar was definitely on a high taking his first World Cup gold medal in front of his home crowd. The Slovenian backed up that effort with a silver medal in Edinburgh reaching 31+.

One of the biggest cheers of the night was during the men’s podium ceremony. And that cheer was for Great Britain’s Toby Roberts.

Only a few weeks back he had been in Dallas, USA, picking up two Youth Worlds silver medals. In front of a home crowd, he fought his way to a first senior World Cup medal taking bronze and inspiring that British podium roar. A fitting finale for what has been a great three days of competition in the Scottish capital. 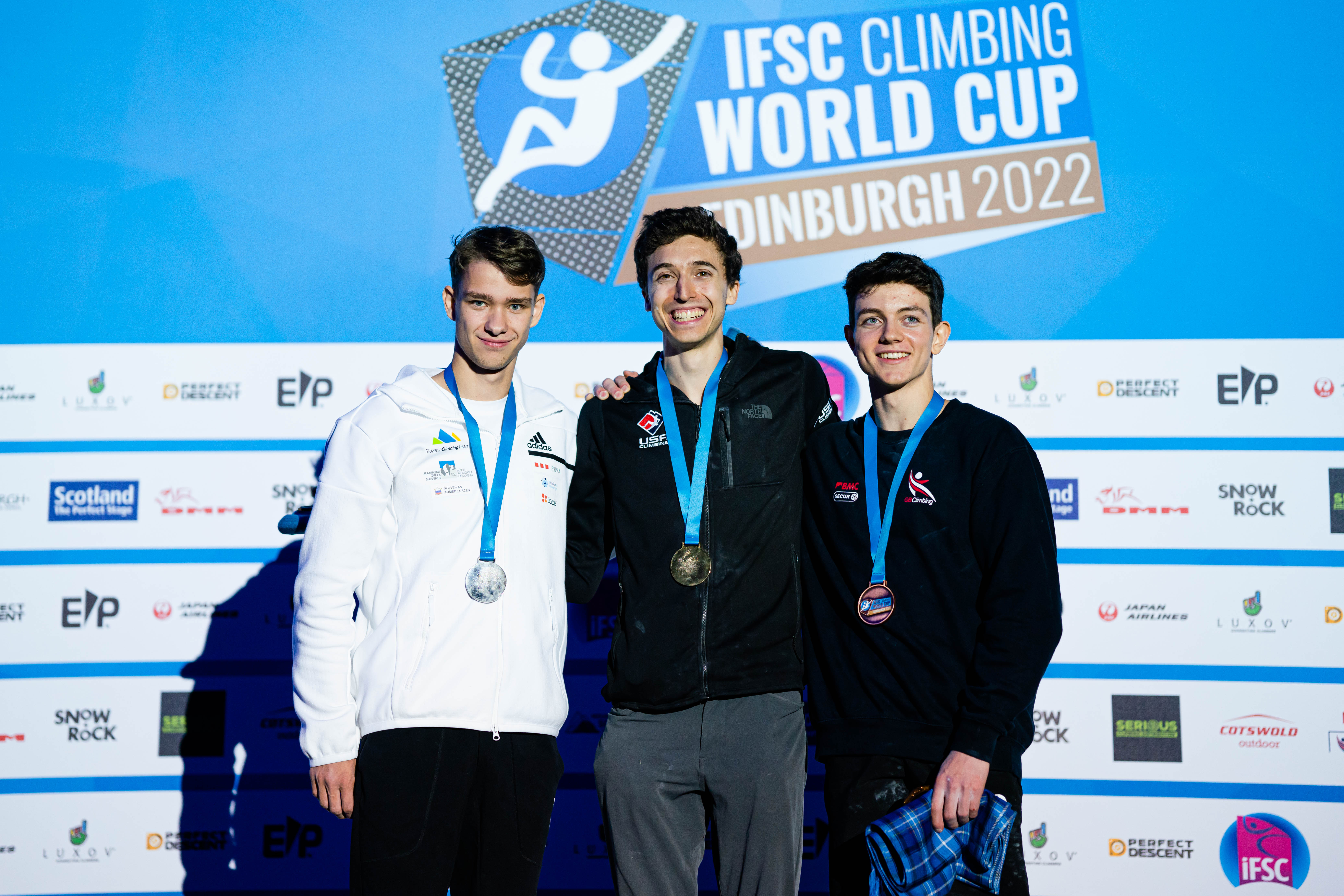