Where do I start with American climber Jesse Grupper? Greeting him is like greeting a friend, but the difference is I’ve only briefly met him once and exchanged a few WhatsApp messages, and yet he makes you feel welcome and like you’ve known him for years with a pretty infectious smile and attitude.

After an hour of talking with the New Jersey native he has taken me through a whirlwind tour of his first climbing competition, to playing the banjo, working at Harvard and dealing with a chronic illness. And now I have the task of trying to get all of this to you and still do the guy justice. Well, here goes nothing…

We catch up at the US climbing team hotel in Villars-Sur-Ollon and I offer to buy Jesse a coffee – this is generally my go-to when it comes to talking to athletes, they usually love coffee – but Jesse is different right off the bat. He doesn’t really drink coffee or have caffeine, but we will come to the why a little later.

We settle for just a quiet bit of shelter from the Swiss midday sun and start with some of the simple stuff: Jesse is a 25-year-old born in New York who now lives in Salt Lake City via New Jersey and Boston. He started climbing when he was nine and credits his older sister Maddy for getting him into the sport, although Maddy wasn’t too happy about the fact.

“My sister was a bit annoyed when I started climbing, actually. It was kind of her thing, and her friends, but when I started, I knew I wasn’t going to stop.”

Even with an annoyed sister and a father who was also getting into the sport, Jesse still remembers his first competition… well, sort of. 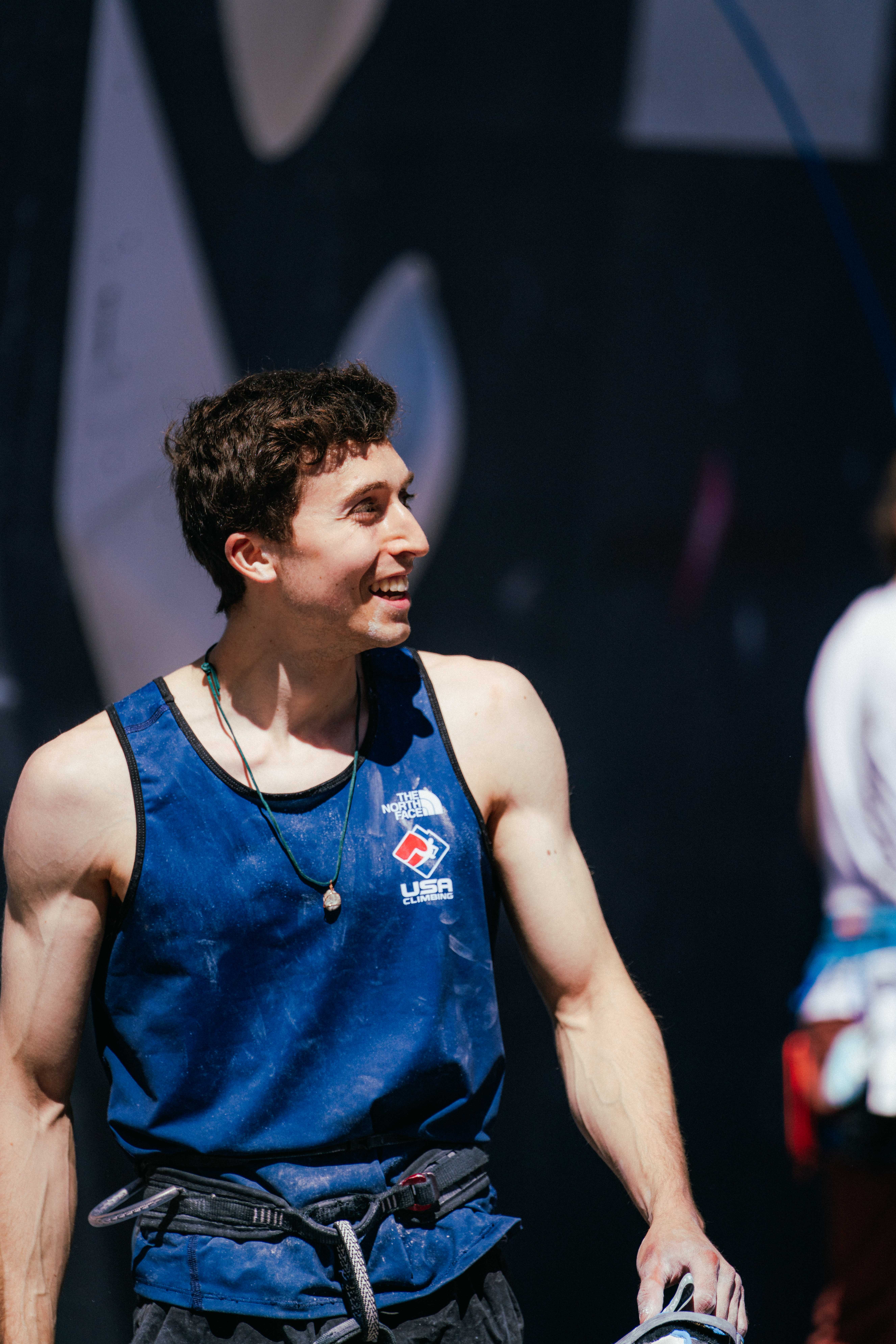 “It was at my home gym in New Jersey where I grew up and I was a completely oblivious kid who didn’t have a clue what was going on around me. I was really nervous.”

“I remember this one route on the side of our gym, and I remember falling a little lower than I wanted to. I was disappointed, but I thought I could go back and do better next time,” he starts to laugh. “I can’t remember if I actually went back though, I guess I must have at some point.”

While most children get the buzz from competition and ultimately get driven on by that pursuit of improvement and success, Jesse – yet again - seems a little different. I mean, obviously he has that or he wouldn’t be competing on the world stage, but you get a sense of something deeper with him.

“In high school I joined this organisation called ‘Peak Potential’ which works with people, mainly children, with physical disabilities and teaches them how to climb. I feel fulfilled in climbing, but this was a chance to work with others and help them improve.”

“I get the opportunity to have that feeling of reaching the top of the wall or doing the best I can do to reach the top of a wall, but it’s on another level when I get to help someone else achieve that feeling as well.”

The love of helping others has also led Jesse down a particular path outside of climbing. A Mechanical Engineering graduate from Tufts University in Boston, I learn that not only is he trying to “give climbing a real go” but also working part-time at a Harvard University Bio Design Laboratory helping to design exoskeletons for stroke victims as well as helping write a paper from a recent study he was part of.

I was at the point now where I would hate the guy for making me feel totally inadequate, if only he wasn’t so nice! But I persevered for the sake of journalism - and I’m glad I did.

So, back to the climbing for a bit. He’s self-aware enough to know that people in the sport would call him a Lead climber, although he loves Lead and Boulder equally as they relate more closely to the reason he is in the sport, for the love of the outdoor aspect.

He’s also aware enough to know he’s no speed climber and even laughs at himself for the fact – “Did you see me last week in Innsbruck?? I’m definitely not a Speed climber, but I do still like it.” 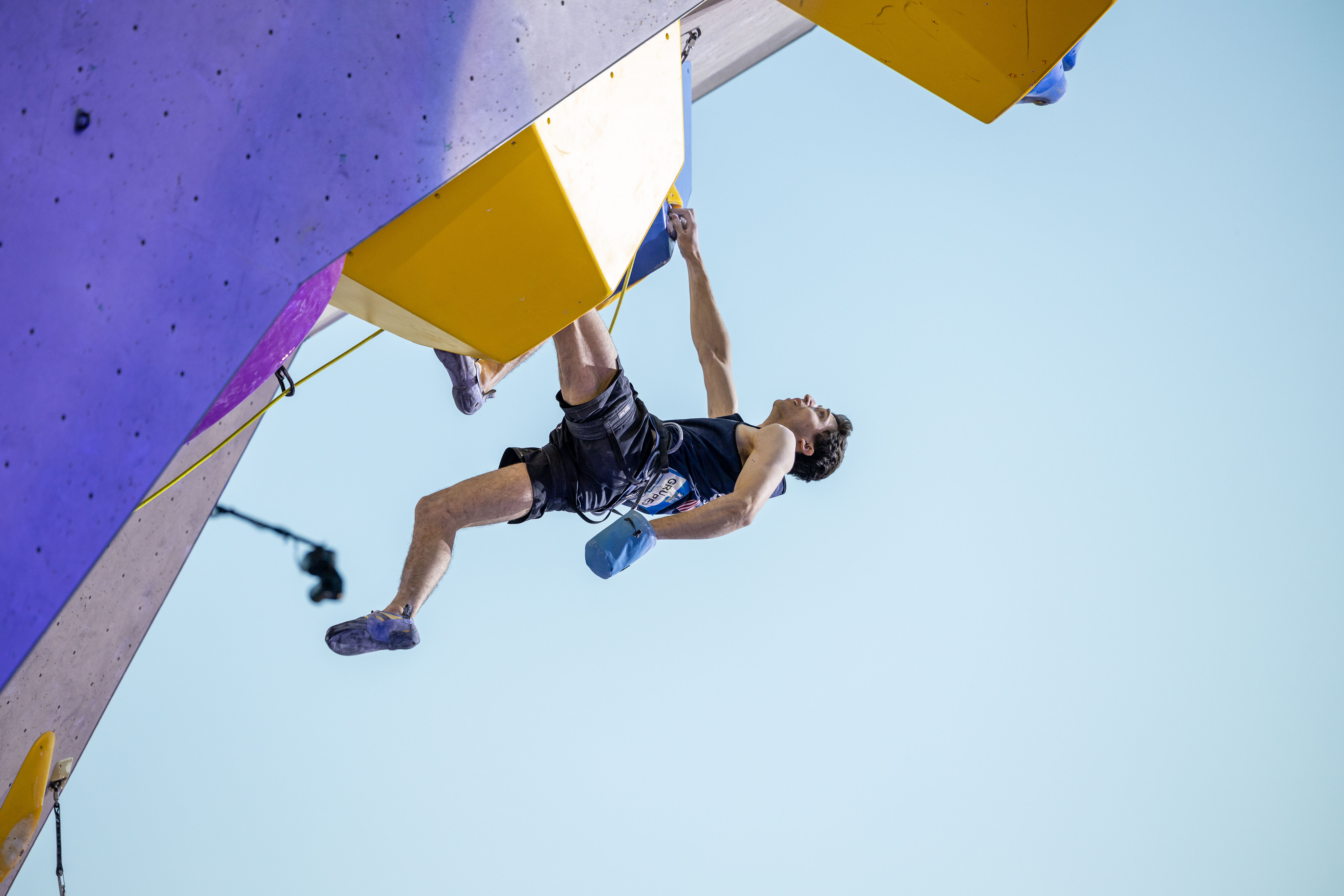 His humour also comes across when he talks about being part of the US climbing team. He’s quick to mention the community and camaraderie within the squad, especially now he has moved from Boston to the team base in Salt Lake City full time, but he’s also not shy about telling me an inside story when I ask about any potential hierarchy.

“It’s really funny you ask actually. We were just picking bedrooms here in Villars and there is one room with two beds which no one wanted to go in, so all the questions came out. Someone was like; ‘Does age count?’ Then Colin [Duffy] came in with his two medals from Innsbruck last week and was like; ‘Do these count?’ It was so funny.”

So how was this important issue resolved? “A lot of rock, paper, scissors! But it was a great example of how there’s no ego in the team. There are guys who could easily pull rank with years of experience, but it just doesn’t happen.”

His involvement in USA Climbing isn’t solely about competing either. Following a study period in Cape Town and seeing firsthand the inequity and challenges South Africa faced, Jesse was inspired to help co-found the Diversity, Equity and Inclusion Committee for his home organisation.

“The rationale behind starting was hearing friends saying they couldn’t start or couldn’t carry on climbing because it’s too expensive. For me there shouldn’t be a reason why anyone can’t climb. It can’t be this insular community, it should be for all.”

So has the Committee made a difference? “You know, you start small. It’s changing language or terminology in documents, and is already starting to expand to grants and aid for organisations. It’s great that USA Climbing is moving in that direction and are willing to listen and change.”

You feel at ease talking to Jesse, and I’d like to think the feeling is mutual as we challenge a sensitive topic.

It’s not a big secret but it’s also something Jesse doesn’t shout about – not that he shouts about much he’s so modest – but he admits it is something he should talk about more to bring attention to it for the benefit of others.

Jesse has a chronic condition called Ulcerative Colitis which is an Inflammatory Bowel Disease. It has affected him in the past as he’s been weaker at competitions and avoided eating to avoid any awkward moments during competition, but in true Jesse style he has dealt with it and learned to live with it – this was the reason for refusing my offer of coffee earlier, I guess I will forgive him.

“It’s something I have to manage and it’s something that plays on your mind, especially at events. It’s a chronic thing that I need regular medication for. For example, I have to fly back to the US in between this and the next event to get an infusion.”

“I do yoga and other relaxation techniques, and that helps, but also it’s about finding other things in my life to take some of the stress off of my climbing as stress is a big factor.”

One of those stress relievers is music. Of course, any regular person would maybe play the drums or piano or pick up a guitar, but you guessed it, not Jesse. The instrument of choice for the American is the banjo. But why?

“I like the Avett brothers and thought it was cool one of them played the banjo. And it’s just a really niche instrument. I like the twang of a banjo and you can’t really make a song sound too sad on a banjo. As far as music goes it’s a happy instrument to play.” 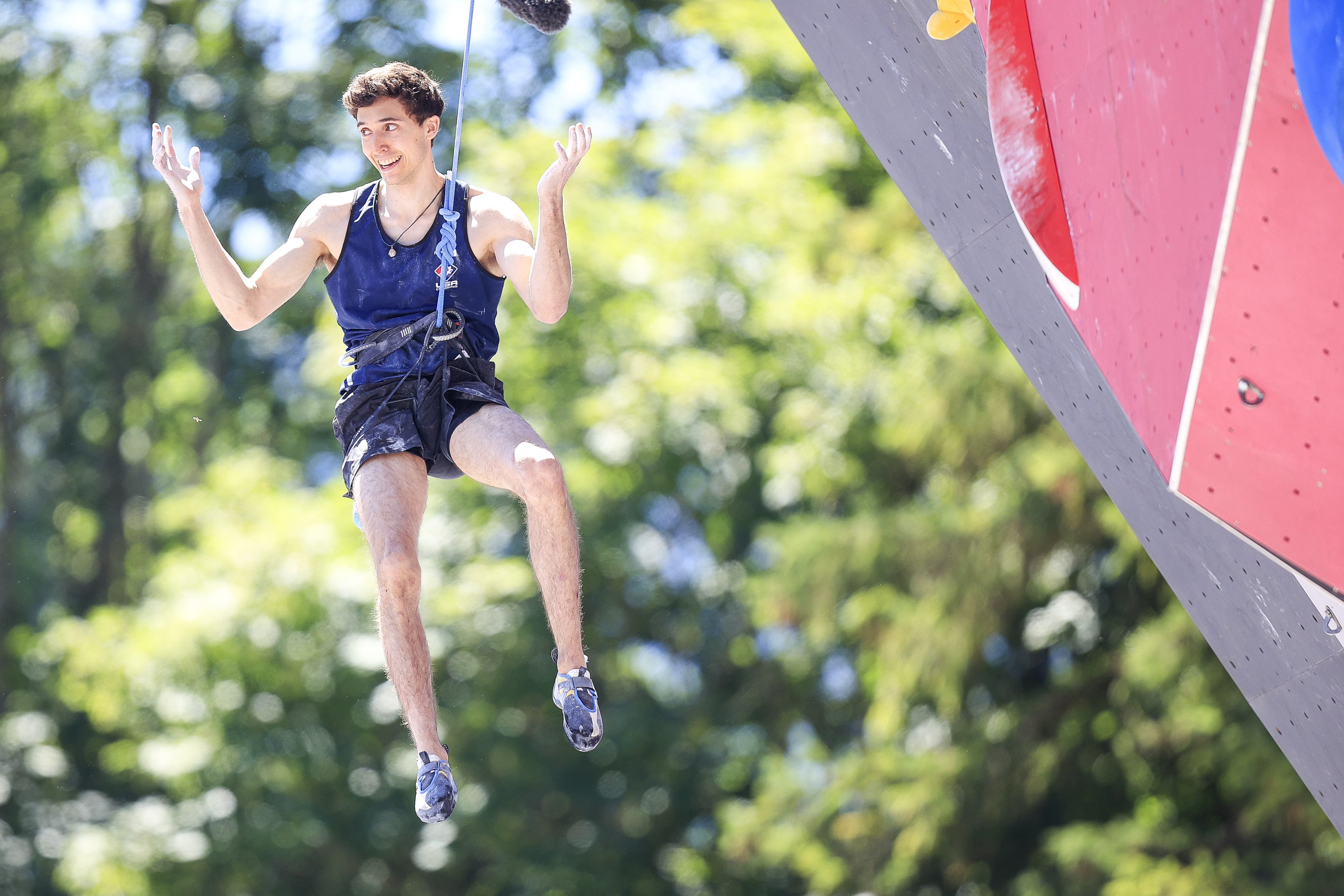 Jesse’s family are all quite musical and he credits his parents for his tenacity and creativity in life and competition.

Dad Jonathan is a documentary film maker who plays guitar. Mum Cathlin is a pre-school teacher who plays a little guitar and sings. Sister Maddy plays the ukulele and banjolele – no DNA test there to make sure they are siblings.

With all that musical talent, will we be seeing the Grupper family band on tour? “If there’s enough people that wanted it,” he says with a laugh.

It’s not just his immediate family that influences his actions. Jesse has an uncle who is an actor on Broadway and in conversations they have spoken about how he will change just a little something every night he goes out to perform, something that Jesse now takes into his climbing creativity when tackling routes.

There’s so much to talk to Jesse about outside of climbing, but it’s only right to finish with something about the sport. So, at the end of his career, many years from now, what would he like to look back on and see as his accomplishments?

Jesse Grupper on the podium of the men's Lead event in Innsbruck, Austria
Photo: Jan Virt/IFSC

“I have goals, as does every athlete. I don’t want to end my career with just facts and figures though. I want to make sure I add to the sport during my time in it.”

“For me, helping others around you in addition to helping yourself is the best way to succeed and be your best self. I don’t know if it’s true, it might be naïve, but I’m definitely going to push it and see if it is.”

From our far too brief conversation, something tells me Jesse will be very happy and successful at the end of his career if this is his unit of measurement.