Hope is now lighting Tokyo 2020’s way as the Olympic flame was lit today in front of the ruins of the Temple of Hera in Ancient Olympia. From the rays of the Greek sun to the Cauldron of the Tokyo 2020 Olympic Stadium, the Olympic flame will send a message of peace and hope to the world and will unite the host nation with emotion.

“The Olympic Torch Relay in Greece is the origin of so many wonderful episodes and stories, and I very much hope that the torch relay that begins today will engender many dreams and aspirations, and bring hope for tomorrow,” said Vice President ENDO Toshiaki at the ceremony.

Only a day after Japan commemorated the 2011 earthquake and tsunami, the Olympic flame lighting has a special significance and underlines the Olympic Movement’s support for the people of these regions. As we enter the tenth year since the disaster that so badly affected the Tohoku region, the Olympic Torch Relay will showcase to the world the progress that they have made in rebuilding their lives and open a new chapter, bringing to life the relay’s concept ‘Hope Lights Our Way’. 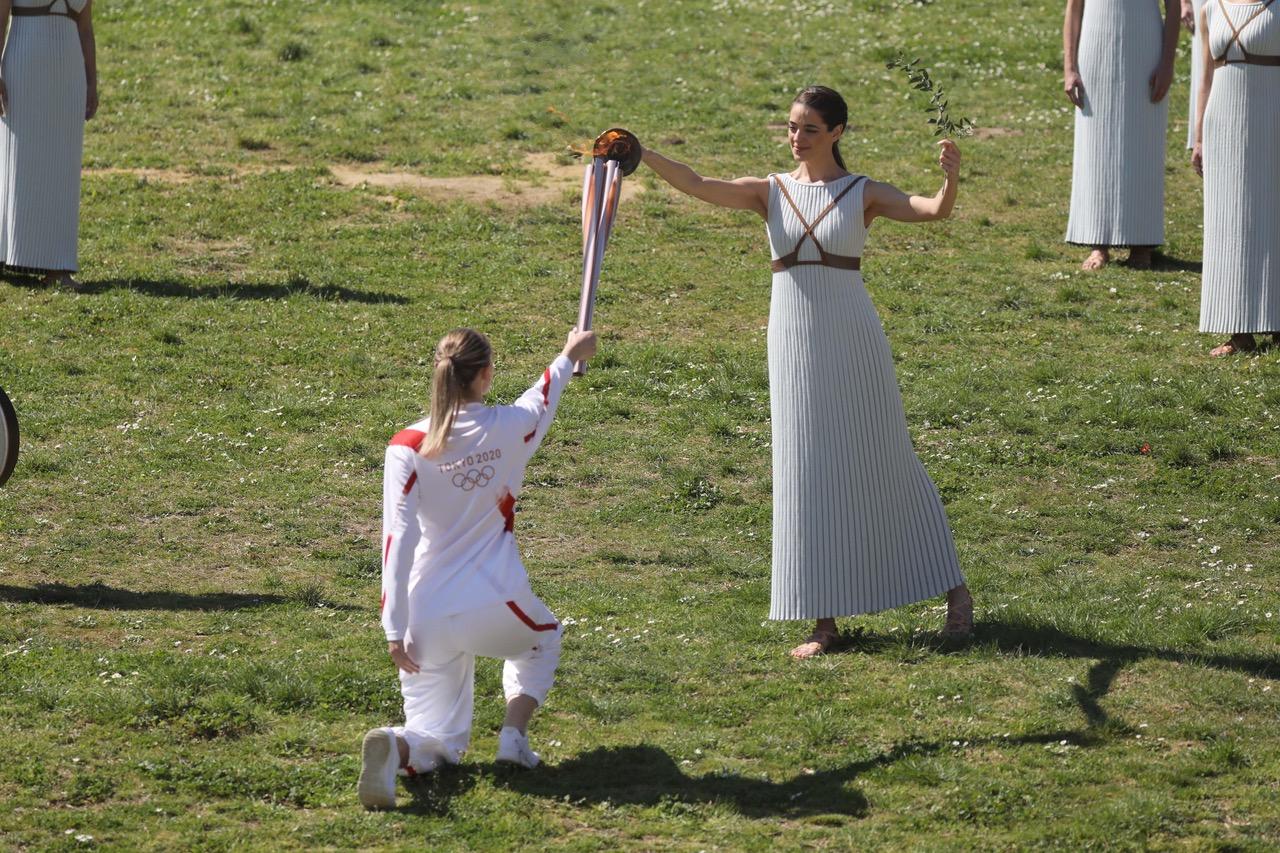 The ceremony to hand over the flame to Tokyo 2020 will be held at the Panathenaic Stadium in Athens on 19 March and the flame will then make its way to Japan, arriving on 20 March.

Upon its arrival in Japan, the Olympic flame will initially be put on display at various locations in the Tohoku region, to help underscore this message of hope in the areas worst affected by the 2011 Great East Japan Earthquake. The special display of the “Flame of Recovery” will be staged for two days each in Miyagi, Iwate and Fukushima prefectures during 20–25 March 2020.

From 26 March, the Olympic Torch Relay will then carry the flame around all of Japan’s prefectures, bringing the Olympics and its values to the entire country. The Grand Start will take place at the J-Village National Football Training Center in Fukushima Prefecture. In the aftermath of the 2011 Earthquake and Tsunami, the facility was forced to cease operations and had been used as a support base for the nuclear power plant clean-up. J-Village has undergone a remarkable recovery and resumed its operation as a symbol of reconstruction.

The first torchbearers will comprise members of the Japan Women's National Soccer Team which won the 2011 FIFA Women's World Cup in Germany, the first ever Japanese soccer team to become FIFA world champions. The fighting spirit the team displayed during the World Cup inspired many of the people struggling in the aftermath of the 2011 Great East Japan Earthquake, and showed how hope can light our way in difficult times.

Then, more than 10,000 torchbearers will travel to 859 local municipalities across all 47 prefectures of Japan for a period of 121 days. Traversing the length and breadth of the country, the route has been designed to ensure people across Japan can cheer on the torchbearers and create a festive atmosphere. The Torch Relay will also pass by World Heritage Sites, famous locations, historic remains and sites that are favourites of the local population.

Due to the unprecedent circumstances the world is facing following the spread of COVID-19, the health and safety of the thousands of torchbearers, spectators and staff will be the first priority along the route of the Olympic Torch Relay both in Greece and Japan.

Once the flame is lit at the Olympic stadium on 24 July, just over 11,000 athletes, representing 206 National Olympic Committees and the IOC Refugee Olympic Team will compete in what will be the most gender balanced Olympic Games in history.

Follow all the latest Torch Relay news on social media and join the conversation with the hashtag #OlympicTorchRelay.