Last year, Sport Climbing’s first Olympic qualified athletes were determined, now the Olympics are here. This season will be busy with all eyes on both the regular IFSC World Cup season and on Tokyo 2020.

Olympic Qualification Comes to a Close

At the end of the 2019 season, 28 athletes had earned places in the Tokyo 2020 Summer Olympic Games after two serious competitions in Hachioji, Japan and Toulouse, France. As 2020 gets underway, the final 12 Olympic qualified athletes will be determined at the conclusion of the five upcoming IFSC Continental Championships.

“Needless to say, we are all excited as we enter a historic year. The Tokyo 2020 preparation is at full speed, but we look forward to congratulating the remaining Olympic qualified athletes at the upcoming Continental Championships this spring and through the Tripartite slots (1+1), to be released soon by the IOC,”  says IFSC President Marco Scolaris.

On top of the final qualifying events and preparations for the big Olympic debut in August, the IFSC World Cup series will continue as usual. Sport Climbing’s top athletes will compete in 12 cities across eight countries with reappearances in Meiringen, Wujiang, Chongqing, Munich, Villars, Chamonix, Briançon and Xiamen.

The World Cups will also make a return to the iconic climbing venue in Innsbruck in June for both Boulder and Lead competitions, while the annual trip to the United States will take place in Salt Lake City, Utah instead of Vail, Colorado. Similarly, the event in Slovenia is moving from Kranj to the capital city of Ljubljana, and a new location has been added in Seoul, South Korea for Boulder and Speed.

The Future’s Time to Shine

Following Sport Climbing’s first Olympic appearance, the rising stars of the sport will take the stage at the annual IFSC Youth Climbing World Championships in Voronezh, Russia. The eight-day event will feature all three climbing disciplines across the three youth categories, Youth A, Youth B and Juniors from 23 to 31 August.

Media can now register to attend IFSC events on the online media accreditation platform. Registration closes one week before the start of each event for TV broadcasters and 48 hours for other media. Broadcasters who wish to film the competition climbing can contact This email address is being protected from spambots. You need JavaScript enabled to view it.. 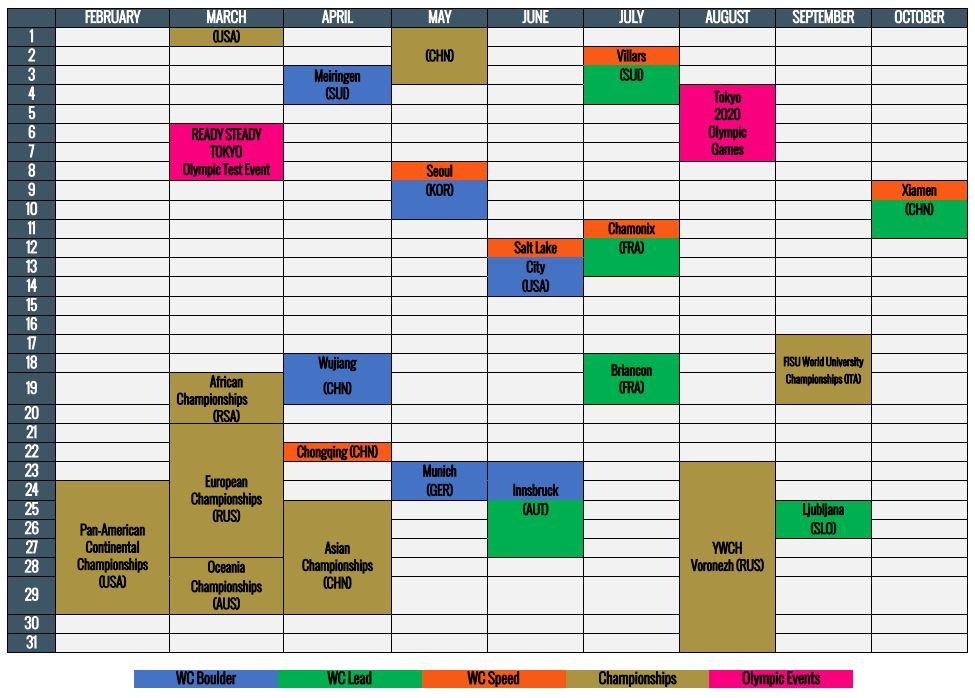