A Battle to the End for Both Sides

The sunny weather, enthusiastic crowd and sheer determination of the athletes made the 5th Bouldering World Cup of 2019 an unbelievable competition to watch. The aesthetic black and red holds were the backdrop to a fierce battle between the competitors, which showed that the strongest climber doesn’t always win.

The men were the first to compete and Russia’s Aleksey RUBTSOV started off strong with a near top on his first attempt but slipped before securing the final hold. The problem appeared to be almost too difficult for the rest of the men’s climbers until Adam ONDRA (CZE) flashed it to the cheers of the crowd.

The second boulder proved easier, with each climber reaching the top. Local favorite Jan HOJER (GER) initially had some difficulty on the start, but solved the problem with a kneebar. With two more boulders left to climb, the battle to first place was still on during M3. Jakob SCHUBERT (AUT) and RUBTSOV quickly figured out the dyno after a few attempts, while ONDRA stuck the move with only one hand. Both Jongwon CHON (KOR) and HOJER had trouble getting passed the balance part of the M3 slab.

All eyes were on M4 to see who would come out on top. Anze PEHARC (SLO) finished the competition honorably with an incredible attempt and shoulder press but slipped reaching for the final move, ending in 5th place. SCHUBERT pushed to the top, steadfastly sticking with a single method, and it paid off, ultimately earning him the gold medal. HOJER, determined to bring home a medal in front of the local crowd, surprised everyone with a flash, landing him in third. ONDRA only needed a zone to push SCHUBERT out of 1st place, and after his previous climbs, chances looked good. However, ONDRA had difficultly figuring out the correct sequence and ran out of time, finishing with a silver medal.

GIBERT turns up the heat

After a difficult Semi-Final round for the women, the Final round was highly anticipated. Ivegeniia KAZBEKOVA (UKR), the only other climber to top in the Semi-Finals beside Janja GARNBRET (SLO), started off strong on W1, topping after 3 attempts. Fanny GIBERT (FRA) and GARNBRET proceeded to flash the first boulder and the pressure was on. Slovenian Mia KRAMPL stole the show on W2, persevering through a knee injury, she managed a double catch dyno to the zone before conquering the top. Both Katja KADIC (SLO) and KAZBEKOVA gave their all on W2, climbing until their fingers bled and then continuing to get back on the wall.

GIBERT continued to put the pressure on GARNBRET on W3 with another top, but was pushed back down to second again when GARNBRET proceed to flash the problem.  Julia CHANOURDIE (FRA) had a particularly impressive flash on W4, staying on the wall for over 2 minutes, finishing the competition in 4th. GIBERT followed with a 2-attempt top and tentative first place. The real MVP of the final though was KRAMPL who smoothly made her way to the zone despite her injury and wrestled her way to the top using a Figure 4 technique, and earning her place in third. It was GARNBRET however, who floated up the route, flashing her third problem of the night and seizing her 5th gold medal of the 2019 Bouldering World Cup season and her third consecutive Munich win.

GARNBRET is on her way to a historic Bouldering World Cup sweep, only needing to win the final Bouldering World Cup in Vail. ONDRA currently sits at the top of the men’s ranking with Japan’s Tomoa NARASAKI just behind. The final overall results will be determined on June 8, when the IFSC makes a stop in the USA.

Visit the official event page for the full results and highlights from Munich. 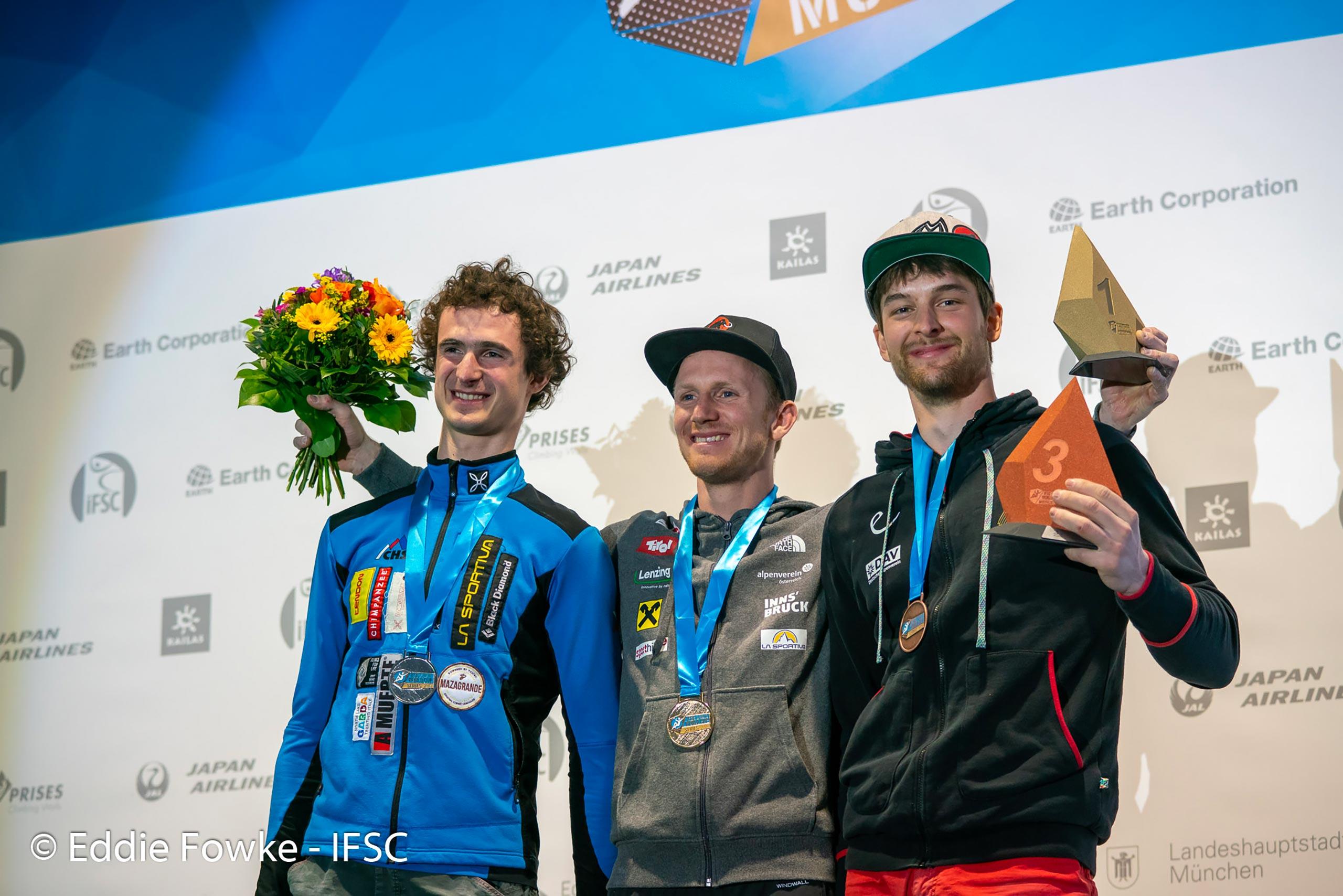