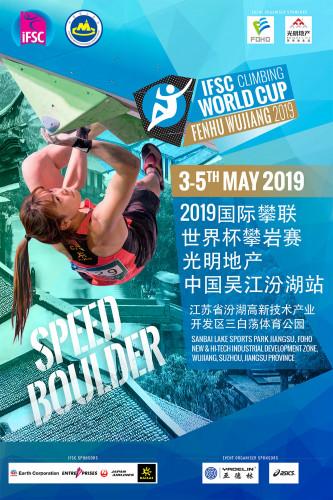 Despite the early conditions on the wall appearing less than ideal, this weekend’s Speed World Cup in Wujiang, China was full of personal bests and surprising results.
As the 2019 speed season progresses, climbers are speeding up with average times decreasing each world cup, particularly among the non-speed specialists.

Dmitrii TIMOFEEV (RUS) was at the top of his game today with a string of personal bests starting with the 1/8 finals all the way to his 5.580-second climb in semi-finals. In the big final, TIMOFEEV beat out the 2019 Moscow winner Bassa MAWEM (FRA) by 0.213 seconds gaining the first-place spot on the podium and his first medal of the season, leaving MAWEM with silver. With a very strong start in the small final, Lucovico FOSSALI (ITA) seized the bronze medal for the event. Last week’s 2019 Chongqing Speed Climbing Champion, Alfian MUHAMMED (INA) fell in a tight race to the finish during the first round of finals to Jan KRIZ (CZE) by a mere 0.030 seconds.
The women’s event started off strong in the qualifiers with 8 women clocking in under 8 seconds. However, in a shocking turn of events, two competition favorites, YiLing SONG and Iuliia KAPLINA did not advance past the round of eight. SONG, who beat the women’s speed world record last week with a blistering 7.101-second climb, fell to Aleksandra KALUCKA (POL) after slipping twice on the wall.

It was the 2019 Chongqing Speed silver medalist, Aleksandra RUDEINSKA (POL) who attained the coveted first place position in the women’s event this time in a close race against Aries SUSANTI RAHAYU (INA). The small final between Anouck JAUBERT (FRA) and Anna TSYGANOVA (RUS) was a battle to the end with both competitors launching off the starting pad to the cheers of the crowd resulting in JAUBERT earning bronze and her first medal of the 2019 speed competition season.

The 2019 Wujiang Bouldering World Cup saw strong overall performances from the Japanese team, who claimed four of the total six podium places. The women’s competition was also highly anticipated featuring the return of Miho NONAKA (JPN) to the world cup scene and the opportunity to witness yet another nearly flawless performance by Janja GARNBRET (SLO).
For this event, the women’s boulders posed a highly physical challenge requiring precise reading to successfully make it to the top. Julia CHANOURDIE (FRA) was the first competitor, starting out her first bouldering world cup final with a zone on the first and second wall, but was unable to top any of the boulders and finishing in 6th place. Jessica PILZ (AUT) had a strong run with 2 tops and 2 zones, ultimately finishing in 5th behind NONAKA due to her number of total attempts.
It was Ai MORI (JPN), one of the youngest competitors this season, who surprised everyone during this event. With 3 tops, not only was this MORI’s first IFSC Bouldering World Cup, it was her first podium earning a bronze medal. Japanese climber Akiyo NOGUCHI continues to climb consistently this season earning herself another silver medal.
As the only climber to top W2, it was the impressive GARNBRET who seized the gold medal with 3 flashes and another 2-attempt top. With her 4th gold medal, she might just sweep the overall 2019 Bouldering World Cup season; only 2 more events left.

The men’s event was exciting from start to finish. With Tomoa NARASAKI (JPN) being the only competitor to successfully top M1, followed by 2 other consecutive tops, it appeared as if he was going to be the undisputed winner by M3. However, Kai HARADA (JPN), put up a fight until the very end narrowly missing out on gold due to number of total attempts. On M3, the judges had initially not recognized his top as valid, but after an appeal it was overruled granting him 3 total tops for the competition, including the challenging M4.
Keita DOHI, the first ever Youth Olympic Climbing Gold Medalist, earned an honorable 4th place just behind Austrian climber Jakob SCHUBERT, with Kokoro FUJII (JPN) and Jan HOJER (GER) placing 5th and 6th respectively.