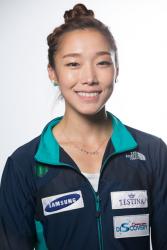 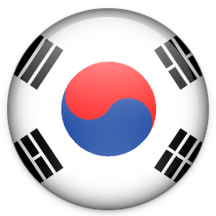 When you started competing in international competitions, did you see yourself being in the top-10?
At the very beginning, I started sport climbing, just following after my brothers. At that time I was scared and even cried at 5-meter heights. But as time went by, I could find lots of fun and even enjoy sport climbing. I didn’t expect to win or get a good result. I just wanted to finish the route. However, at the first international competition I competed, the 2002 Asian Youth Championships held in Malaysia, I became the Lead champion fortunately.
What motivated you to compete rather than just to climb outside?
At first, I tried harder not because I liked sport climbing but only because I wanted to be good at it. I wanted to get recognition. Now, however, I love sport climbing so much. When I practice, my motivation is to reach the top rather than finishing first.
What are some struggles you face as an athlete?
My height, definitely. Compared to the average height of other female climbers, I am almost 10cm shorter than them. As the routes get more difficult, athletes perform lengthy movements. Being taller is a huge advantage since athletes can grab onto a hold more comfortably. However, I have made my body flexibility as one of my biggest strengths to make up for my short height. Thanks to my flexibility, I can crouch in a small space and be in a more stable position. Also, I have practiced High Step skills, which help to stretch out a leg to reach a hold, and I use this technique in competitions a lot.
What influenced you to start competing?
I first knew about climbing when I was a little kid. My parents met each other in a mountaineering club and got married. That was how much my parents loved mountains and climbing. My older brothers as well often enjoyed climbing with my parents. From my childhood memories, I went to a park, where an artificial climbing wall was located, on weekends with my family and watched my brothers climbing. So I started climbing naturally, following my parents and my brothers. After that, I fell in love with climbing more and more. When I climb, it feels like being the real myself. In other words, I feel like I am, Jain Kim.
Who most helped you get to where you are right now?
I would say it is my family which helped me the most to get to where I am right now. My mother is an Official First Class Climbing Judge. My eldest brother owns a climbing center and works as a trainer. Another brother also works as a trainer and practices climbing together as well. My father calls himself ‘a road manager’ of mine. He also enjoys going to the mountains and rock-climbing with me. I was not lonely because I’ve always been climbing with my brothers. That was the biggest part. Also, since I hate being defeated, I tried hard to practice as much as my brothers did. They also gave me advice when I encountered difficulties.
What advice could you give to Young Athletes?
When I was young, I didn’t have peer athletes. But nowadays, I have noticed winners from domestic competitions are mostly young athletes. At the last year’s finals, I was the oldest among all athletes. However, I think many young athletes just give it a shot and then give up easily. Honestly, at that period, there was no better way to build skills than just trying harder and harder. But it seems like young athletes tend to give up easily when faced with bad results only after trying little. I would like to say that young athletes should enjoy climbing if they are eager to do it. If you keep enjoying climbing besides results, skills will build up along. One more thing I would like to advise young athletes is to experience as much as possible. Experience is very helpful to build up your skills. I as well started participating in international events when I was 20 years old, and began developing skills needed for international competitions.

It was really honor to be invited to the launching event for #GalaxyA with awesome korean… http://t.co/Gl4U2hzy3a

It is hard to explain how I feel about finishing this season over but It's certain to say that it was… http://t.co/Fq5SvCVZGf