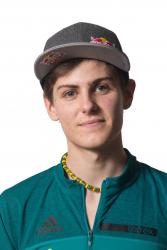 ​When you started competing in international competitions, did you see yourself being in the top-10?
The first “real” international competition for me was European youth cup in Prague in 2008, where I came 15th. My first year on the international level was tough. I already had no confidence as everything was new for me and on top of that I was also competing against names like Adam Ondra. After few competitions I saw that it wasn’t too bad and I could do a lot more. The year after I got used of the field, got the necessary confidence and started winning my category. Same was when entering the senior field first year, but soon I got the confidence and knew I could be one of the best.
What motivated you to compete rather than just to climb outside?
I love nature and climbing outdoors but I’m a very competitive person and if you want to compete in a proper way, you have to go do competitions. I like the adrenaline and the atmosphere there!
What are some struggles you face as an athlete?
Sometimes some small injuries but I got to say I’m super lucky with that to this point.
What influenced you to start competing?
When I started training and began to improve, I wanted to see where I’m compared to the others. I guess I got that competiveness from my brother as he was a great skier and I watched him compete as a small kid before I even encountered climbing. I took competitions for granted.
Who most helped you get to where you are right now?
Mostly my family!
What advice could you give to Young Athletes?
Be competitive but don’t climb for the number, climb because you enjoy it!
What are some of your favourite hobbies?
Travelling, cooking, spending time with my girlfriend and friends.