An action-packed eighth day of the International Federation of Sport Climbing (IFSC) Youth World Championships saw three finals in Lead and Boulder, in addition to two Boulder semi-finals. The USA’s Anastasia Sanders (14) took the win in the women’s Youth B Boulder final, climbing her way to a second gold medal after also placing first in the Youth B Lead final earlier this week.

Junior women took to the mats for the first competition of the day, participating in their Boulder semi-final. With four tops and four zones, France’s Naile Meignan (17) leads the way into tomorrow’s final, having also placed first in the qualification round. Behind her, Germany’s Anna Lechner (18) also achieved four tops and four zones, ranking second due to a higher number of attempts taken to top. Silver medallist of the women’s Junior Lead competition – Slovenia’s Lucija Tarkus (17) – placed third, and Nonoha Kume (17) of Japan, who took gold in Lead, placed fifth.

The full line-up for tomorrow’s Junior women’s Boulder final is as follows:

The Youth A women’s Boulder semi-final followed, in which the USA’s Kylie Cullen (16) earned the top spot in tomorrow’s final with four tops and four zones. France’s Zélia Avezou (17) ranked second with three tops and four zones, and Italy’s Alessia Mabboni (16) placed third with the same score, but using one more attempt than Avezou. Sara Copar (16), who won a gold medal in the Youth A women’s Lead competition, also earned a spot in the final.

Through to the Youth A women’s Boulder final are:

In the Youth A men’s Lead final, 17-year-old Haruki Uemura of Japan took the win with 29+ and earned himself a gold medal. This is the second time the Japanese athlete has stood atop the podium of an IFSC Youth World Championships, after taking a silver medal in Lead at the 2019 edition of the championships in Arco, Italy. France’s Mejdi Schalck (17) and Slovenia’s Timotej Romšak (16) completed the podium in second and third place, respectively, having climbed to 28 and 27+ in the final. Japan’s Junta Sekiguchi (16), who won gold in Lead during the 2019 championships, missed out on the podium in fifth place. 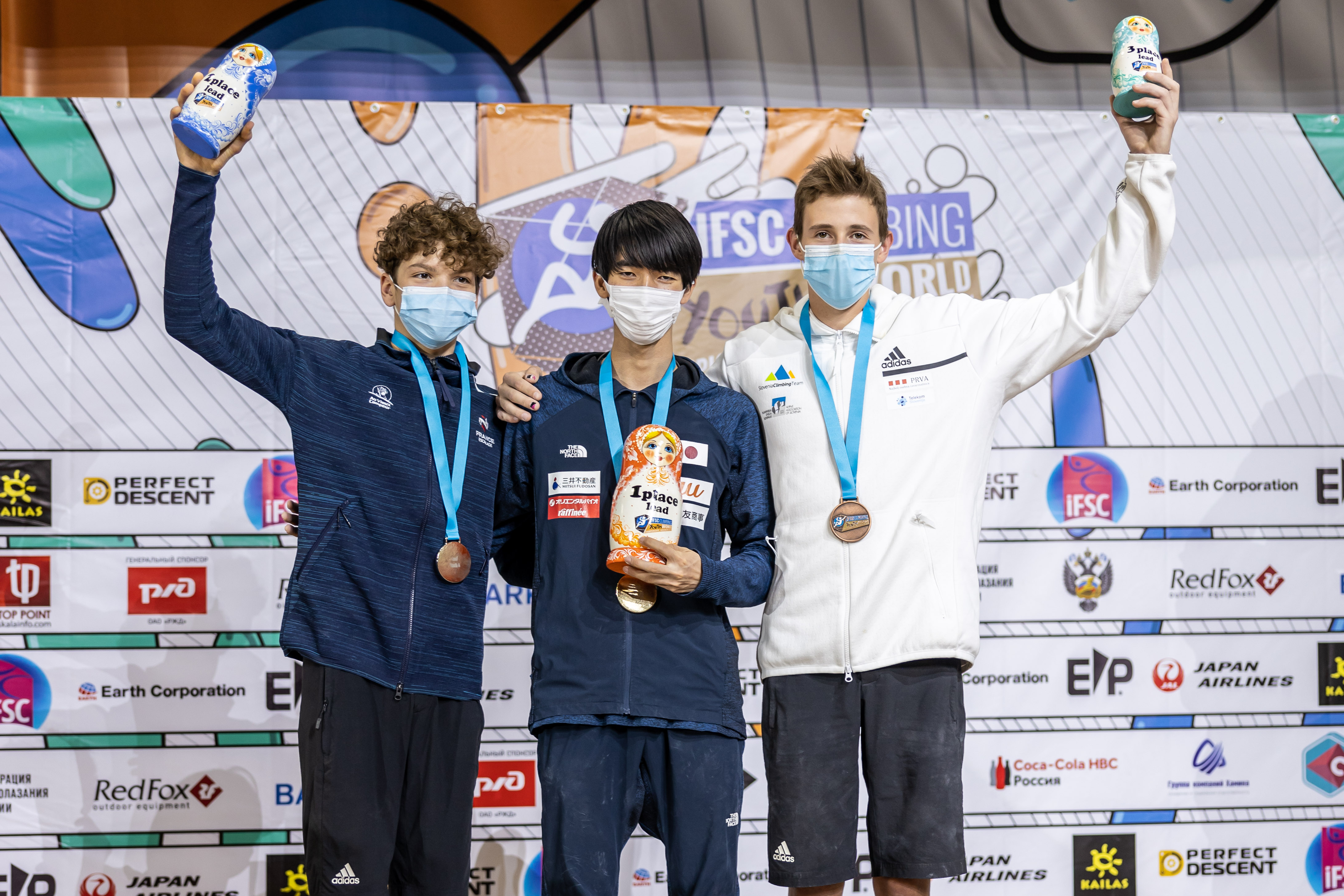 Following the Youth A men’s Lead final, a combined ranking was calculated for athletes competing across all three disciplines of Boulder, Lead, and Speed, within the age category. Latvia’s Edvards Gruzitis (17) placed first and took a gold medal with 48 points, with Toby Roberts (16) of Great Britain and Slovenia’s Timotej Romšak taking silver and bronze medals with 70 and 90 points, respectively. Romšak therefore added a second bronze to his collection, having taken third place in Boulder. 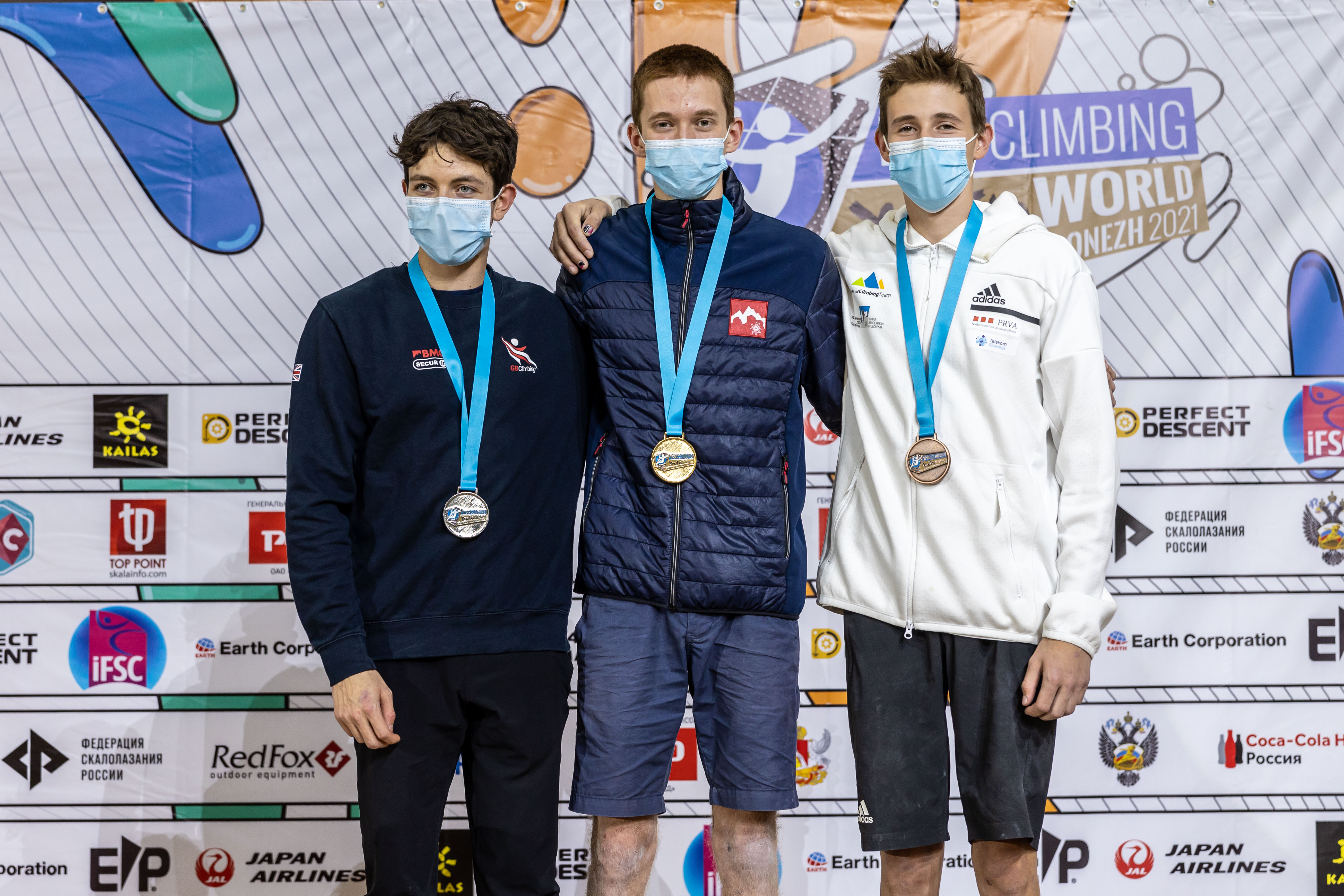 In the Youth B men’s Boulder final, Bulgaria’s Nikolay Rusev (15) placed first with three tops and four zones. The 15-year-old is no stranger to climbing onto a podium, having won six IFSC European youth medals so far in 2021, though this is the first time Rusev has won a medal at the Youth World Championships. Fresh from the top of the Youth B men’s Lead podium, where he took the gold medal earlier this week, Japan’s Sorato Anraku (14) won silver in Boulder with three tops and four zones. Having placed first in the semi-final round, Anraku settled for second place in the final due to using more attempts than Rusev. The USA’s Augustine Chi (14) completed the podium in third place, with two tops and three zones. 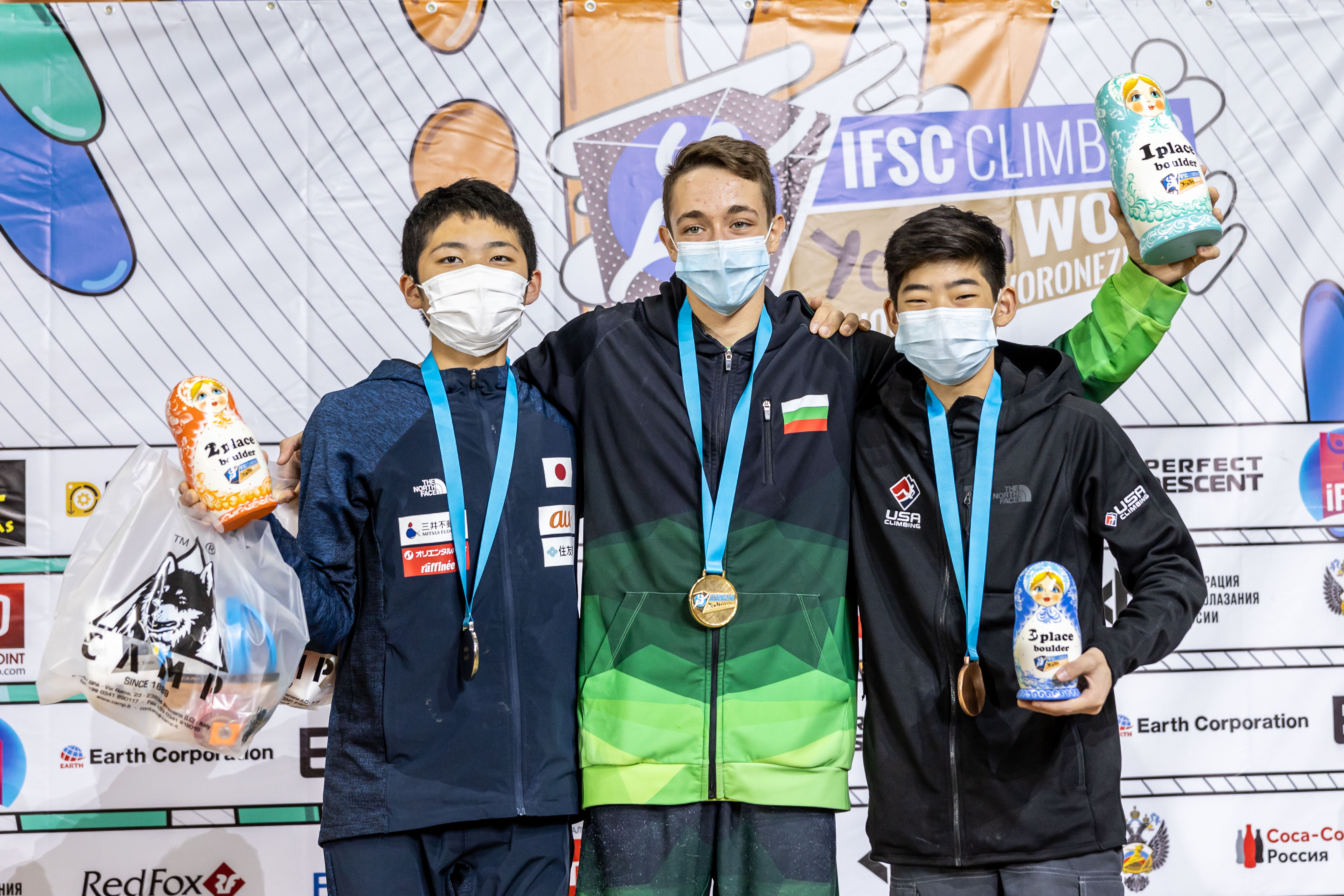 The final competition of the day was the Youth B women’s Boulder final, where the USA’s Anastasia Sanders claimed her second gold medal of the week with four tops and four zones. Sanders also placed first in the Youth B women’s Lead competition on Tuesday, topping every Lead route of the championships in her debut international competition. France’s Meije Lerondel (14) achieved second place with three tops and four zones, taking her second silver medal of the week after also winning silver in the Lead competition. Austria’s Sina Willy (14) completed the podium line-up, taking bronze with two tops and two zones. 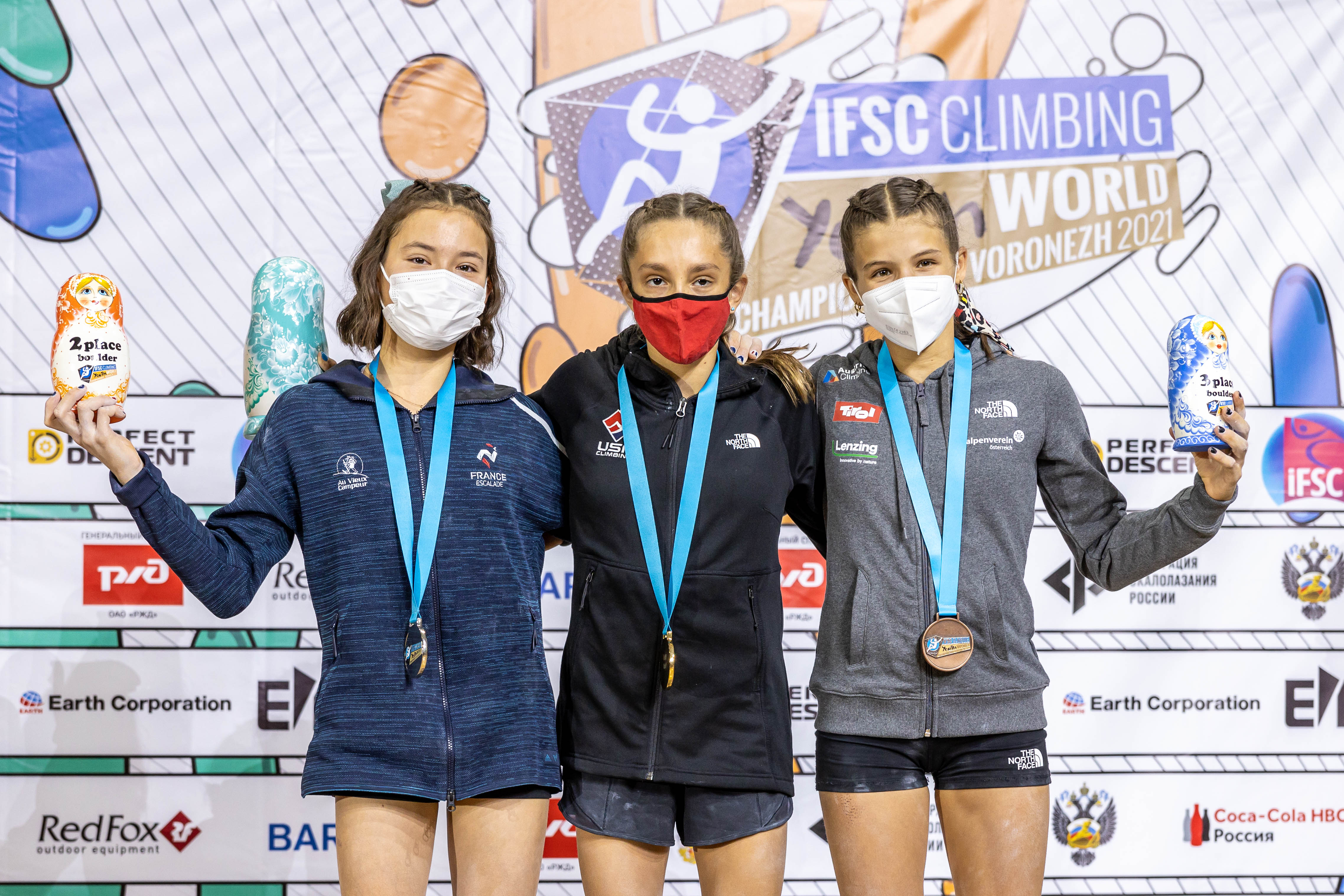 Tomorrow sees the penultimate day of the 2021 IFSC Youth World Championships take place in Voronezh, Russia, with the Junior women’s Boulder final commencing at 12:00 PM (UTC+3:00), followed by the Youth A women’s Boulder final at 5:00 PM. Both finals will be streamed live on the IFSC YouTube channel.