At the World Cup event in Edinburgh I got the chance to sit and talk to someone who knows Scotland pretty well – but I’m guessing it’s not who you think it is. Despite all the Brits in attendance, I’ve got a bit of time with Canada’s Alannah Yip.

For the first Conversation with I spoke to American Jesse Grupper, and I was fascinated by his life and how open he was to telling me. With Alannah the same is true, but this time I felt I had some personal connections and could relate to some of the things she was saying – I guess in some ways that’s the point of a conversation with someone you don’t really know yet.

As the roar from the World Cup crowd in Edinburgh erupts from inside, I sit down with Alannah outside, only given the chance because qualification didn’t go as planned for the Canadian – but we will come to that later.

Sitting on a bench with the venue one side and quarry face the other, Alannah informs me that it is more like home than I realise. Her mum is Scottish and her dad is Chinese and she has spent a bit of time in Glasgow, just a forty or so minutes up the road.

“My mum says I have to eat haggis and drink Irn-Bru as an annual thing to keep up being Scottish,” jokes Alannah. “I’ve been to Scotland a few times though to visit family and it feels a bit like home.”

Home in fact is Vancouver in the province of British Columbia in Canada.

“I’ve lived in Vancouver all my life. Well, I was actually born in North Vancouver and then I moved all the way to Vancouver – like ten minutes south across the bridge.” Another bit of humour from the likeable Alannah – I already know from the first question I’m going to enjoy this interview.

Thanks to the ten-minute drive south, and a close friendship between her parents and a certain McColl family, her climbing adventure began.

“I grew up about a two-minute drive away from Sean McColl. Our families are friends. Our parents were in university together and I’ve known Sean since I was born, so we grew up together.

“Sean is six years older than me, and his brother is eight years older. Their family started climbing when Sean was around ten, I think, so I would have been four. I really looked up to them and I didn’t have older siblings and they kind took that role. When they were competing and going to Youth World Championships, I just loved the idea of doing it, so I tried as well and I ended up falling in love with the sport.” 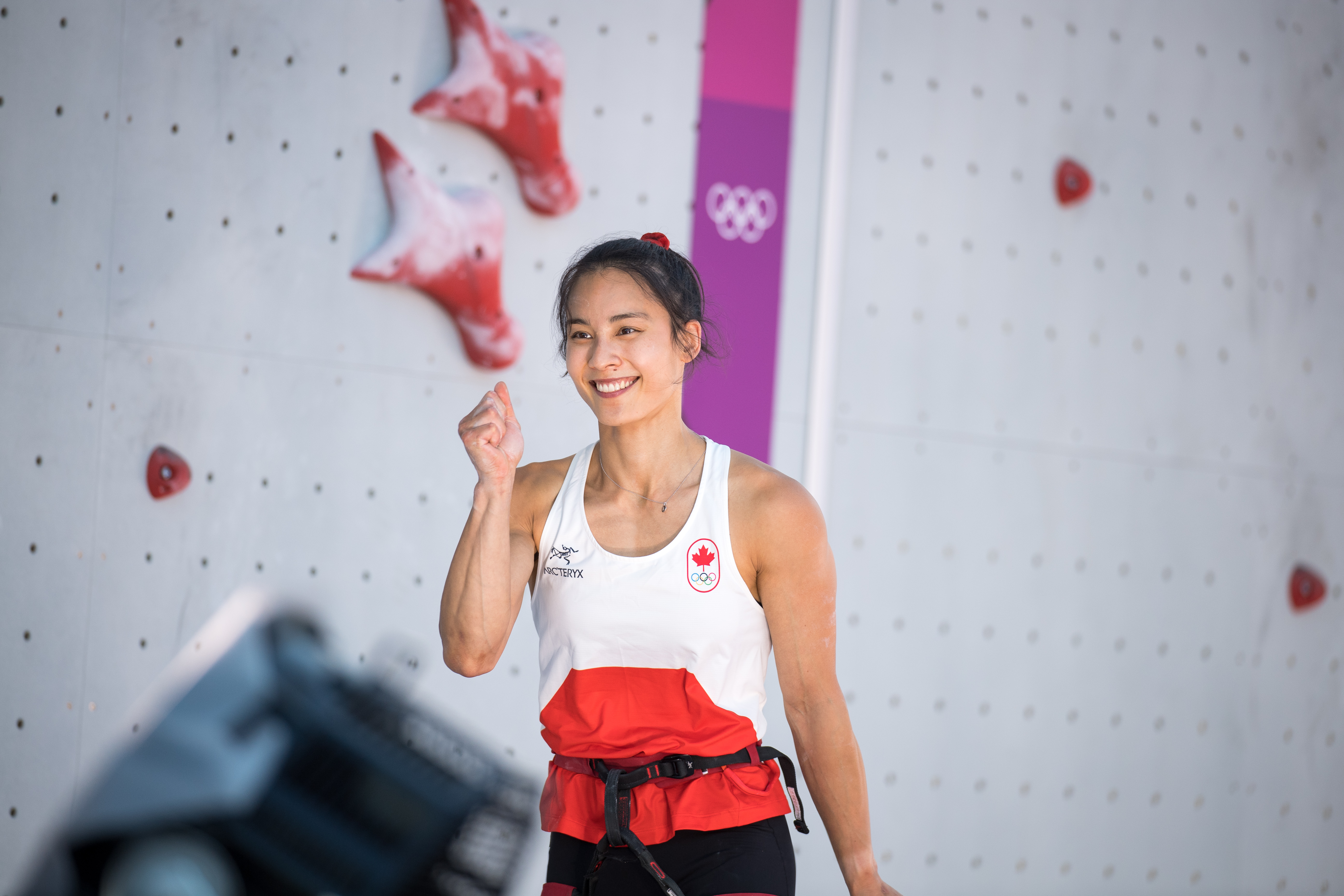 Climbing nearly lost Alannah to another sport early on though – so thank you Sean and the McColl family.

“Me and my younger brother, Trevor, used to go-kart. When I was about ten, I had to choose between that and Climbing as the competitions were on the same weekends. I was the only girl doing go-karting, Climbing had more, and that made it feel like it was more of a community for me.”

Alannah and Trevor got into go-karting through her dad’s love of racing vintage cars: “We kind of grew up at the tracks,” explains Alannah.

Dad Doug is an engineer and has worked in the automotive industry, even inventing “a gadget in the 80s – monitoring input data channels on a race car.” Thankfully Alannah dumbed it down enough for me – although I’m not fully sure, or will I ever be, what the gadget is and does.

Racing wasn’t the only thing Alannah got from her dad. She could dumb down her explanation for me as she also is an engineer, like her father, having gained her Mechanical Engineering degree from the University of British Columbia in 2018.

“I stopped Climbing for a bit during my degree studies as I didn’t want to half arse two things at once, so I tried to focus on one for a time.”

That focus was tested though as Climbing was always giving her signs. 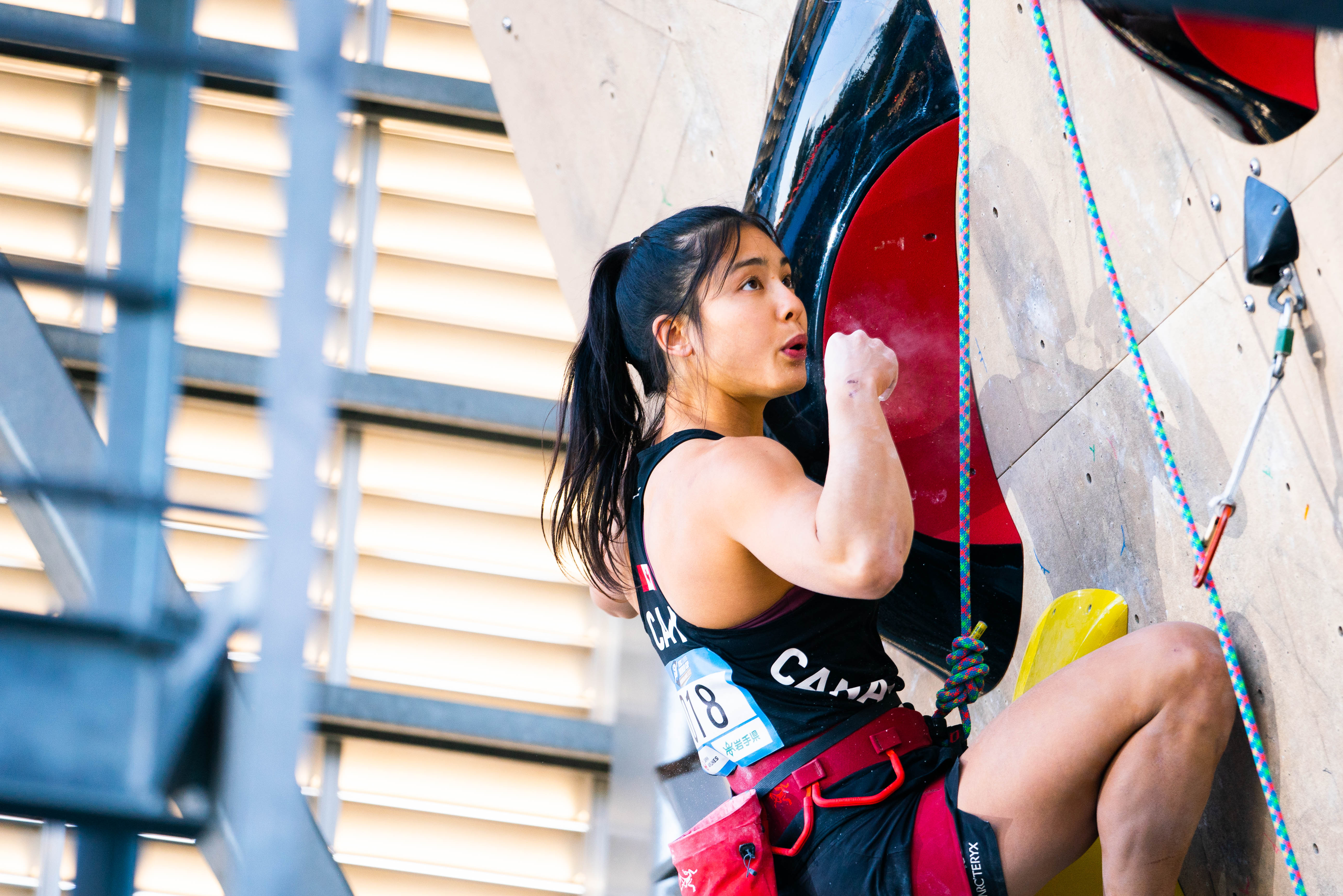 “In the middle of my degree I went to Switzerland and started training with the locals. There were World Cup finalists and semi-finalists in the group, and it made me realise I could do it as I was close to keeping up with them in training.”

There was also another moment of uncertainty for Alannah in the final year of studying for her degree: “I had doubts about my major and wanted to switch, but my parents told me I had worked so hard to that point, and I needed to finish – in the end they were right.”

One half of the Yip parental unit seems to have had a lot of influence over Alannah’s story so far with Alannah taking the engineering and car loving side of life from her father, so what comes from her Scottish mum Moira’s side?

“I am more similar personality wise to my mum,” explains Alannah. “Our sense of humour is basically identical. She can be witty and dry.”

With a similar personality, surely a similar career path would have made sense. “I briefly thought about medicine like her, but I was so introverted when I was younger and not so much a people person. I was way more into maths and physics than biology, it’s just the way my brain works. Numbers work well for me.”

It’s hard to believe from our conversation that Alannah is introverted – I am even interviewing her before she goes to do co-commentary for TV. But, earlier I mentioned I could relate to Alannah – and this is one such occasion. 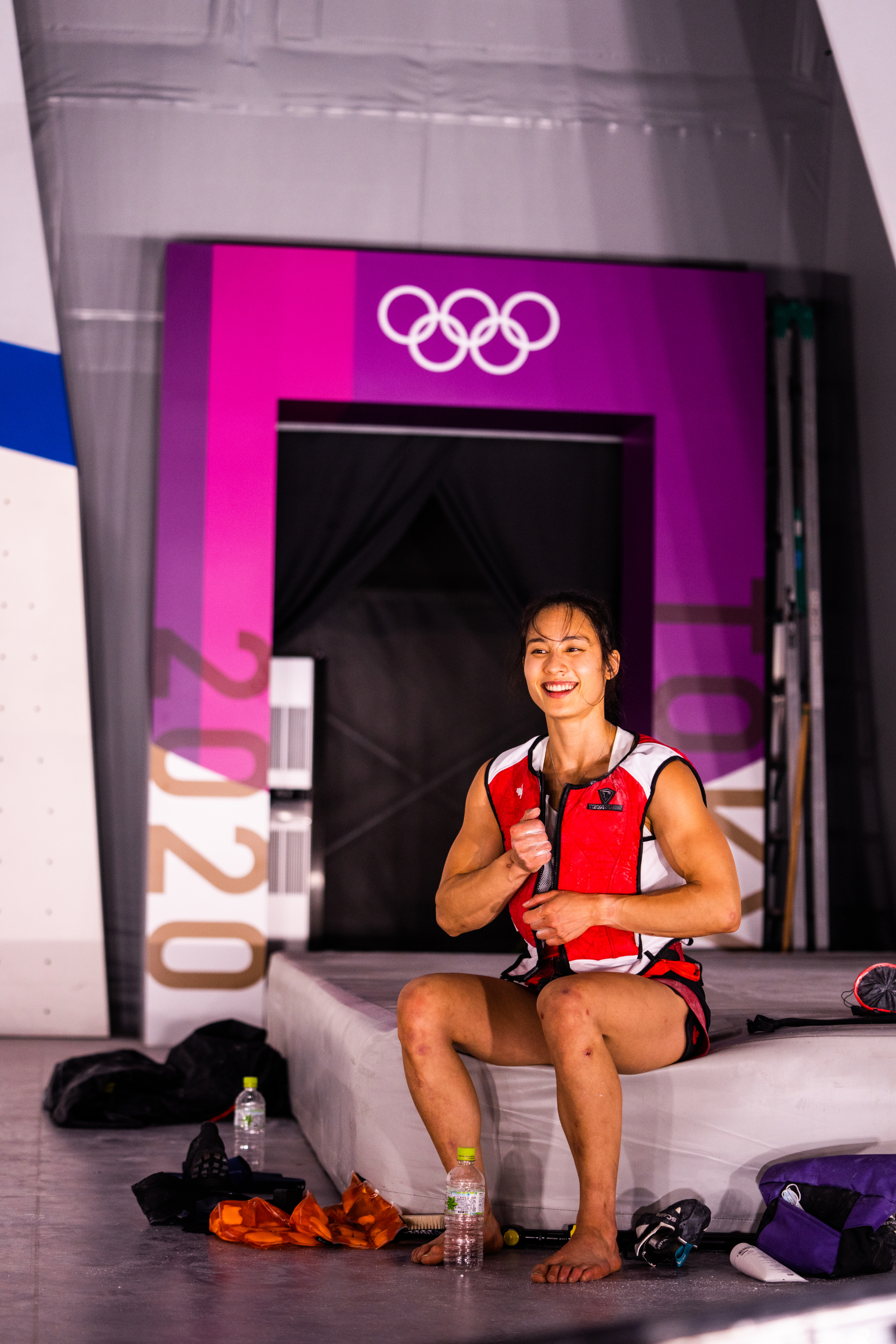 I also mentioned earlier that I got the opportunity to talk to Alannah because of her Lead qualification round – and here’s why: “I had a bad day. It’s been a while since I cried, but I cried that day. It’s not about results – it was the feeling on the wall. I couldn’t stop my mind racing, if I can get it under control I can keep going and keep Climbing, but I just couldn’t get it under control and that’s when I make stupid decisions.”

Again, this surprises me about Alannah. I know I haven’t spoken to her for long, but what I am picking up on is that in front of me is an intelligent, level-headed person who seems very self-aware.

“I am quite level,” remarks Alannah. “It’s both a strength and a weakness. I used to joke that growing up I was a robot and that I didn’t have any feelings because I didn’t really know how to 'feel' my feelings and experience them – it’s something I’ve been working on but having a good support system is key.”

The support system comes from an obviously influential family unit, but also the team around her while she is away from home and on the road.

“When I cried, my coach was there. My teammates were there. I know they are there for me in good and bad, and I’m there for them in the same situations. We aren’t the closest team simply because Canada is so big and you sometimes only see others at competitions, but we have been traveling and staying together this year.

“Something which was really good was that we had the opportunity to sit down as a group and define from the beginning what the culture would look like and how we support each other, and want to be supported by our teammates, which was a really cool opportunity. That was a good exercise and something I think we should do in the future.”

Being a Canadian climber also throws up other issues that has Alannah at odds with herself.

“I’m an ambassador for Protect Our Winters Canada. It’s mostly winter sports athletes, but the aim is to gather outdoor enthusiasts and lobby government for stronger climate policies.

“Climbing can be a very low impact sport if you are outdoor, but indoor could be much better. Then there is also the travelling we do. It’s hard coming from North America because if we didn’t fly we could only realistically go to one international competition, and even that would be hours, maybe days of driving.”

While Alannah is travelling, there is another member of the Yip support system – boyfriend JJ – who both supports and teases in equal measure.

“Being away for long periods is just something I have to deal with. It doesn’t mean I don’t wish I could spend more time at home. My boyfriend is sad when I’m not there, but then on the other hand he sends me pictures of all the cool stuff he is doing back home like mountain biking and swimming, it gets me a little jealous!” 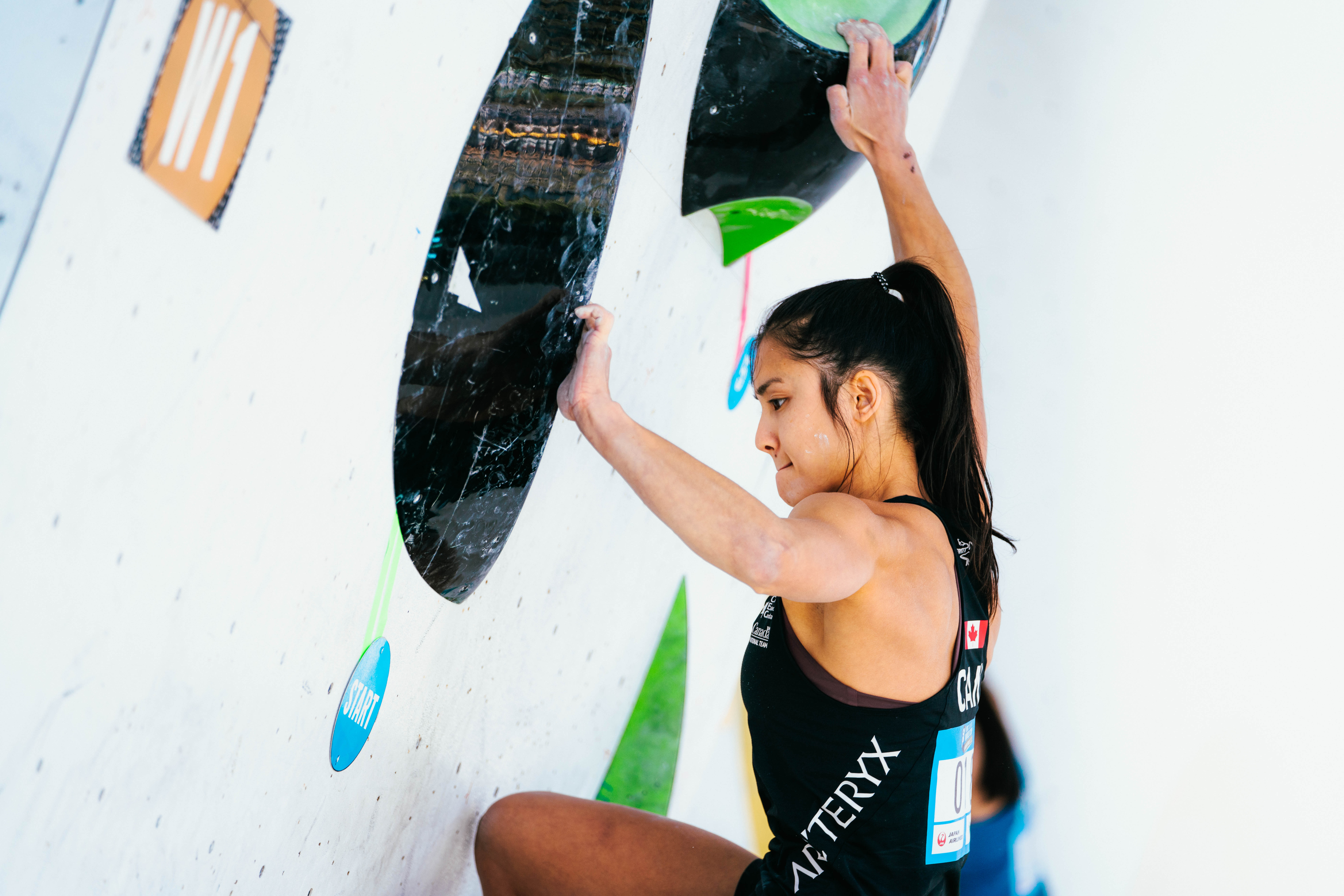 Something I like to ask everyone I speak to is to tell me something not many people know about them. Sometimes it’s a boring answer, and sometimes it’s cool. For Alannah, it is just another point of kinship between me and her.

“I kill every plant I have. I’ll either over-water and drown them or I’ll just totally forget. Either way, they don’t last long with me.”

Luckily for Alannah, JJ is around – and also maybe a blessing in disguise that Alannah is away from home for so long, for the plants that is.

“We have this giant Monstera plant at home, the only reason it’s alive is because of JJ. I just leave it well alone now.”

Having covered topics like family, Climbing, personality and plant killing, it’s time to look to the future. So, what does it hold for Alannah?

“I’m 28 now. I feel like the grandma. I’m usually closer in age to the coaches, but I am still enjoying it and still learning a ton every time I compete. I feel I have more to give so I feel I have more time in the sport as well as looking to what potentially could be next.

“I would like to stay in Climbing, but an ideal would be combining the both - Climbing and engineering. I do love coaching, but I don’t think it’s something for me to do full time.”

Combining Climbing and engineering seems like it would suit Alannah, but add in sustainability and I’m sure there is something she could really contribute to that would satisfy all of her skills and loves.

These chats are all too brief, but from our conversation I’ve no doubt Alannah will contribute to the future of Climbing and will help the sport grow and evolve – I’m afraid I can’t really say the same about the Canadian plant population though.