THE USA, SLOVENIA, AND CHINA PLACED ATOP THE WORLD CUP SERIES MEDAL TABLES

The International Federation of Sport Climbing (IFSC) World Cup Series 2022 concluded in Jakarta, Indonesia, where the Lead and Speed seasonal trophies have been awarded.

With 12 World Cups already in the books, and the only event in Morioka, Iwate, left to play out, medal tables for Boulder, Lead and Speed have been determined, and the USA, Slovenia, and China took the top positions.

Team Japan followed in second position with three golds, four silver, and seven bronzes. Ogata Yoshiyuki won the 2022 men’s event trophy by placing on the podium at five out of six events; three medals were won by Narasaki Tomoa, while Fujii Kokoro, Kawamata Rei, and Nonaka Miho also finished on the podium.

Germany closed the season in third place with one gold – won in Brixen, Italy by Yannick Flohé – and two silvers, both signed by Hannah Meul.

France, Slovenia, Great Britain, South Korea, China, and Switzerland are the six national teams that also placed on the men’s and women’s Boulder podiums in 2022. 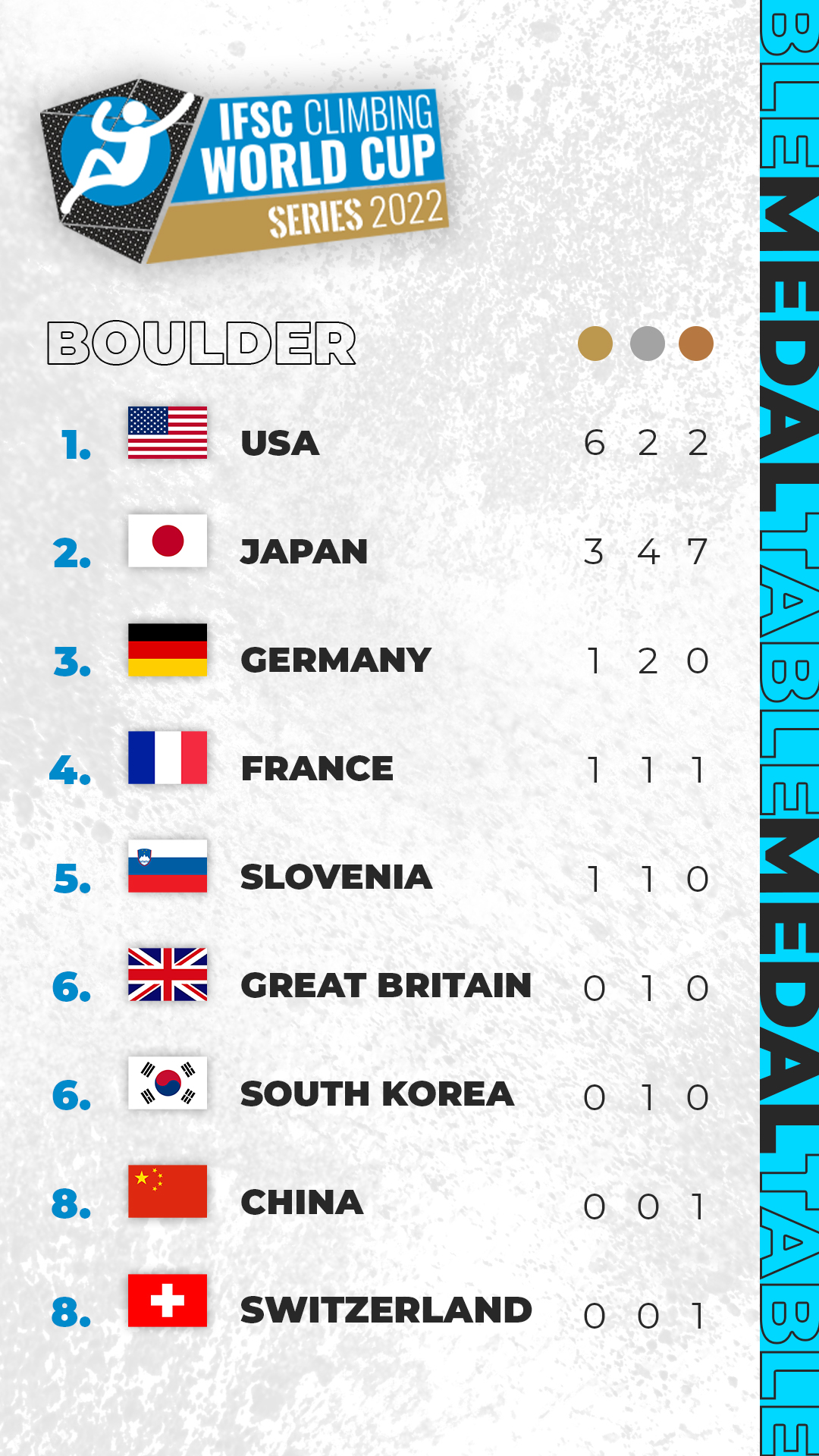 Tokyo 2020 Olympic champion Janja Garnbret and Luka Potocar pushed Slovenia at the top of the Lead medal table with a total of six golds, three silvers, and one bronze. Garnbret alone pocketed five golds and two silvers; Potocar contributed with one gold and one silver; Mia Krampl – also an Olympian at Tokyo 2020 – won bronze at the final World Cup event of the season in Jakarta, Indonesia.

Other medals were awarded to the Czech Republic, South Korea, Italy, Switzerland, Germany, and Great Britain. 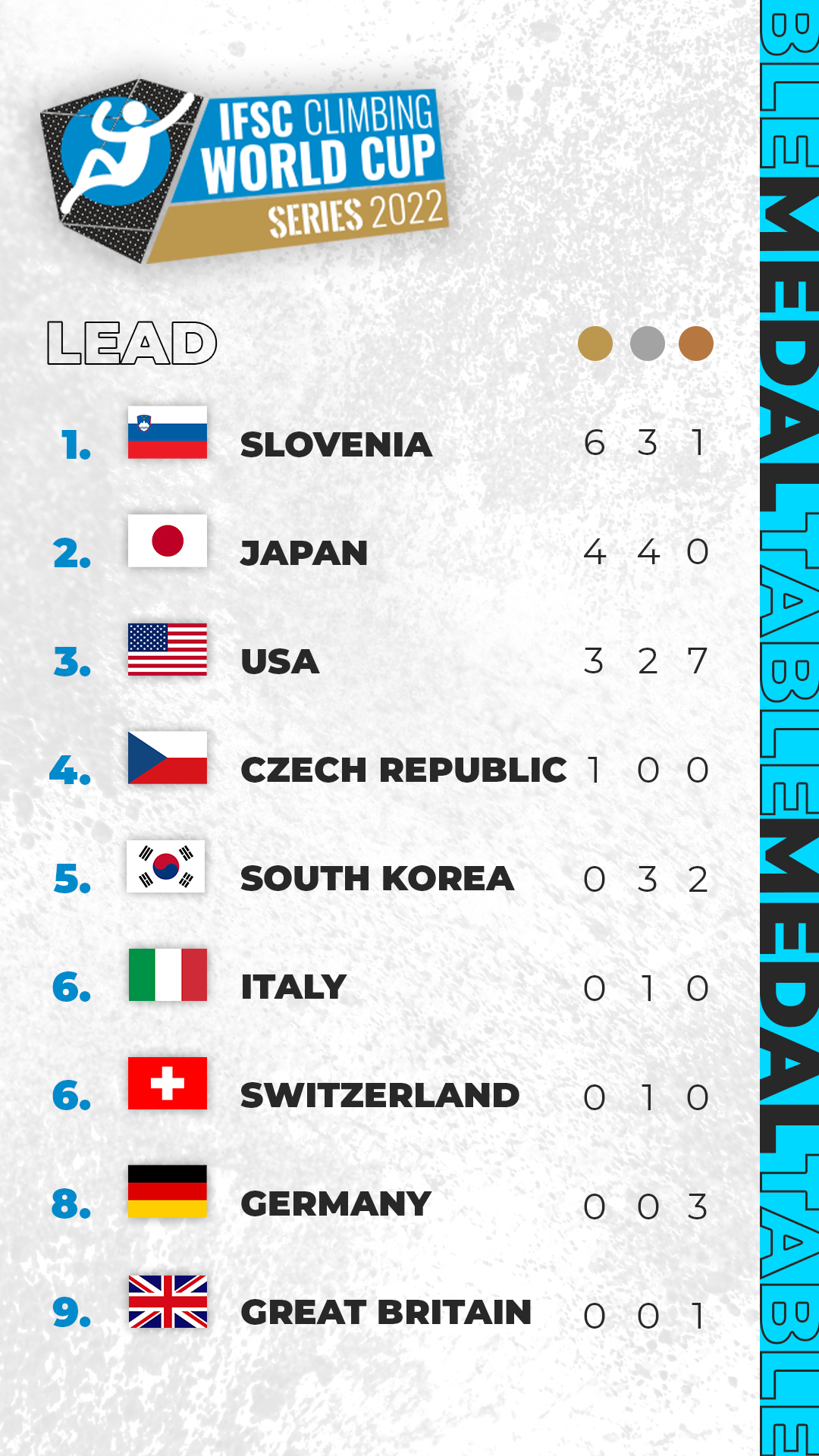 Three national teams battled all along the Series for the top of the Speed medal table. Eventually, it was China to conclude at the top of the ranking, with five golds, three silvers, and two bronzes – all won in the last four events of the season.

Deng Lijuan won three golds, while Long Jianguo and Long Jinbao won one each. Long Jinbao also added one silver and one bronze; Wu Peng and Niu Di contributed with one silver each; Cao Long placed third in Jakarta.

Poland trio of Aleksandra Miroslaw, Aleksandra Kalucka, and Natalia Kalucka secured the 12 medals – evenly split between golds, silvers, and bronzes – that gave their team the second position in the Speed ranking. Miroslaw dominated the first half of the season, closing with three golds out of three participations. Aleksandra Kalucka added an one gold, two silvers, and three bronzes, while her twin sister pocketed two silvers and one bronze.

The third protagonist of the Speed season has been Indonesia, who finished third in the ranking with four gold medals, two silvers, and five bronzes. Veddriq Leonardo placed first twice, with Kiromal Katibin and Aspar Aspar also pocketing one gold each. Katibin also added two silvers, while bronzes were awarded to Rahmad Adi Mulyono, Desak Made Rita Kusuma Dewi – twice – and Aspar.

The USA, Spain, Austria, and Italy are the four national teams that also won at least Speed medal in 2022. 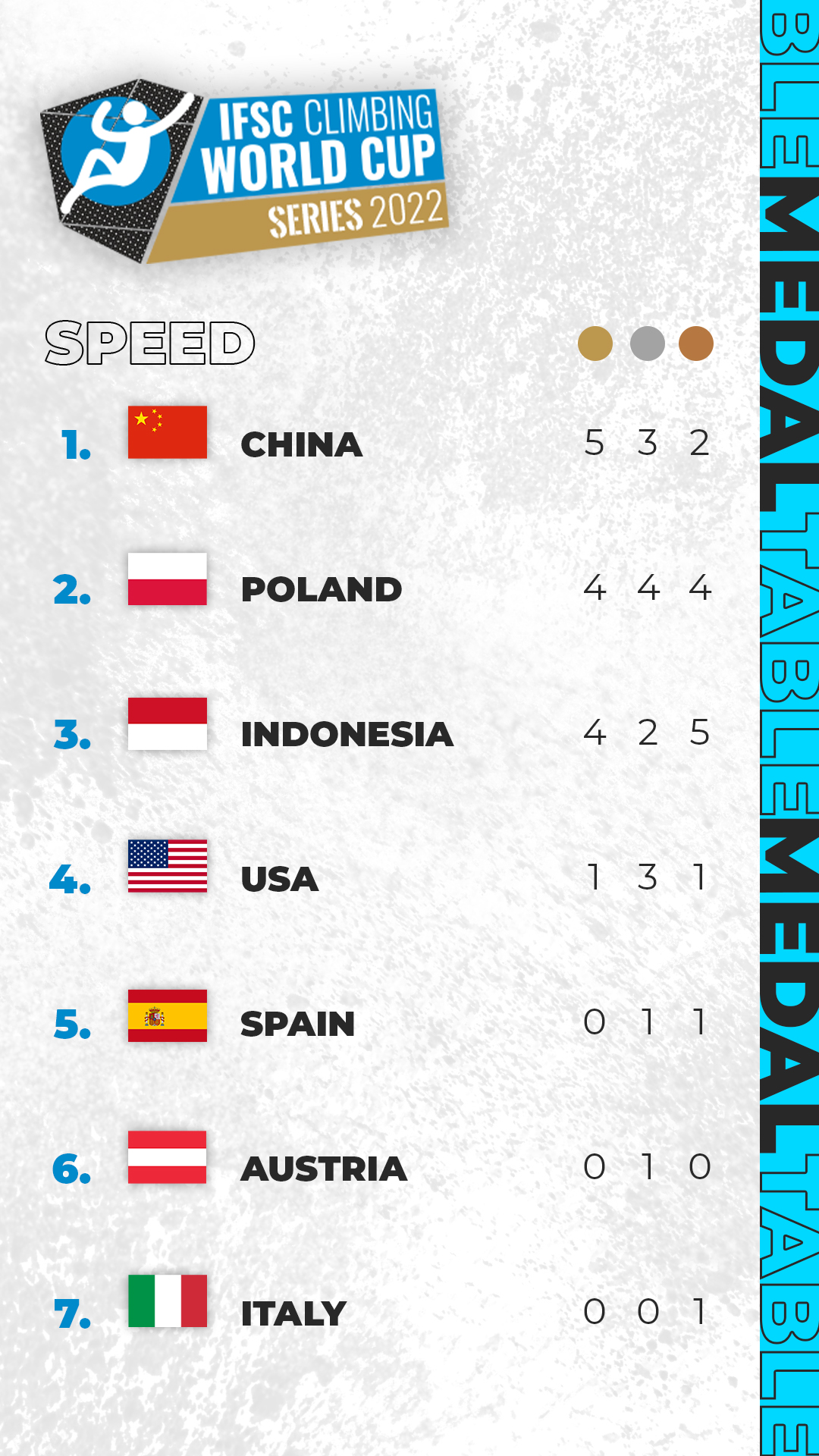 The final IFSC event of the season is scheduled in Morioka, Iwate, Japan, from 20 to 22 October.