The crowd at the International Federation of Sport Climbing (IFSC) World Cup Series event in Edinburgh, Scotland, witnessed a little bit of history being made as USA’s Samuel Watson won his country’s first ever Speed gold medal.

There was also a first ever finals family race for the Polish Kalucka twins for the onlooking EICA:Ratho spectators to get excited about in an action packed night of Speed racing in the Scottish capital.

Just a few weeks ago 16-year-old Samuel Watson was breaking national records at the Youth Worlds in his native USA, today he was picking up the first ever Speed World Cup gold for his country.

Throughout the finals series Watson seemed to be wiser than his years, focusing and keeping his cool while others around him seemed to be faltering.

Watson came through the first-round with a steady win. He then went through quarterfinals courtesy of a false start. Then through semis as his rival fell. But it was no fluke or lucky streak, and he proved it in the final.

Up against China’s Long Jinbao, who on paper was the favourite with experience, medals and quicker times on his side, Watson won what seemed like a nervy final with both climbers stuttering at stages in a time of 5.97 compared to Jinbao’s 6.93. The Chinese climber had to settle for silver.

“I’m feeling amazing. Feeling great,” said Watson. “I have been loving the atmosphere here, I couldn’t ask for anything better here in Edinburgh. It’s a beautiful city with great vibes. The competition. Beautiful venue. I am just loving everything.”

Both Erik Noya Cardano of Spain and Gian Luca Zodda of Italy fell in their respective semifinals matches to set up the small final. This time it wasn’t a fall but a false start which was the decider as the Italian went too early handing the Spaniard a World Cup bronze medal.

The full men’s Speed results can be found here The women’s Speed final was a family affair as the Polish Kalucka twins faced off for gold.

Both making their way through the finals series, the stage was set for Aleksandra and Natalia to fight it out for a Speed gold medal, in what was their first ever World Cup final showdown.

When it came to the medal race it was actually a slip that settled the podium positions as Natalia fell early, meaning her sister Aleksandra climbed solo to gold in a time of 7.47. It was her first World Cup gold medal.

“I feel extremely happy,” said Aleksandra. “I’m also really proud of myself and my sister because it was our first big final together. I really hope we can do it again, maybe even Jakarta at the next event.”

It was the first ‘big final’, but the twins have raced against each other before. So, what is it actually like?

“I try to just focus on myself and my run and not think about who I am racing against,” said Aleksandra. “I always try for a personal best. I didn’t get it this time, but I got the gold.”

For sister and silver medallist Natalia it is one step at a time in World Cup competitions, first get to the final race and be in with a shot to win – something that she achieved in Edinburgh: “This was my World Cup final and I’m very proud. It is hard racing against your sister, but I am proud and happy for the both of us.”

Third place and the bronze medal went to USA’s Emma Hunt. The American had a strong competition all-round posting a personal best in qualification with 7.02 seconds. She went even better in the quarterfinal with 6.88, and better still in the semifinals with 6.84 – missing out on a final place by just 0.01 to eventual winner Aleksandra Kalucka.

Not quite as quick, but a 7.28 in the small final was enough to secure bronze against Italy’s Guilia Randi who tapped at 7.63.

The full women’s Speed can be found here 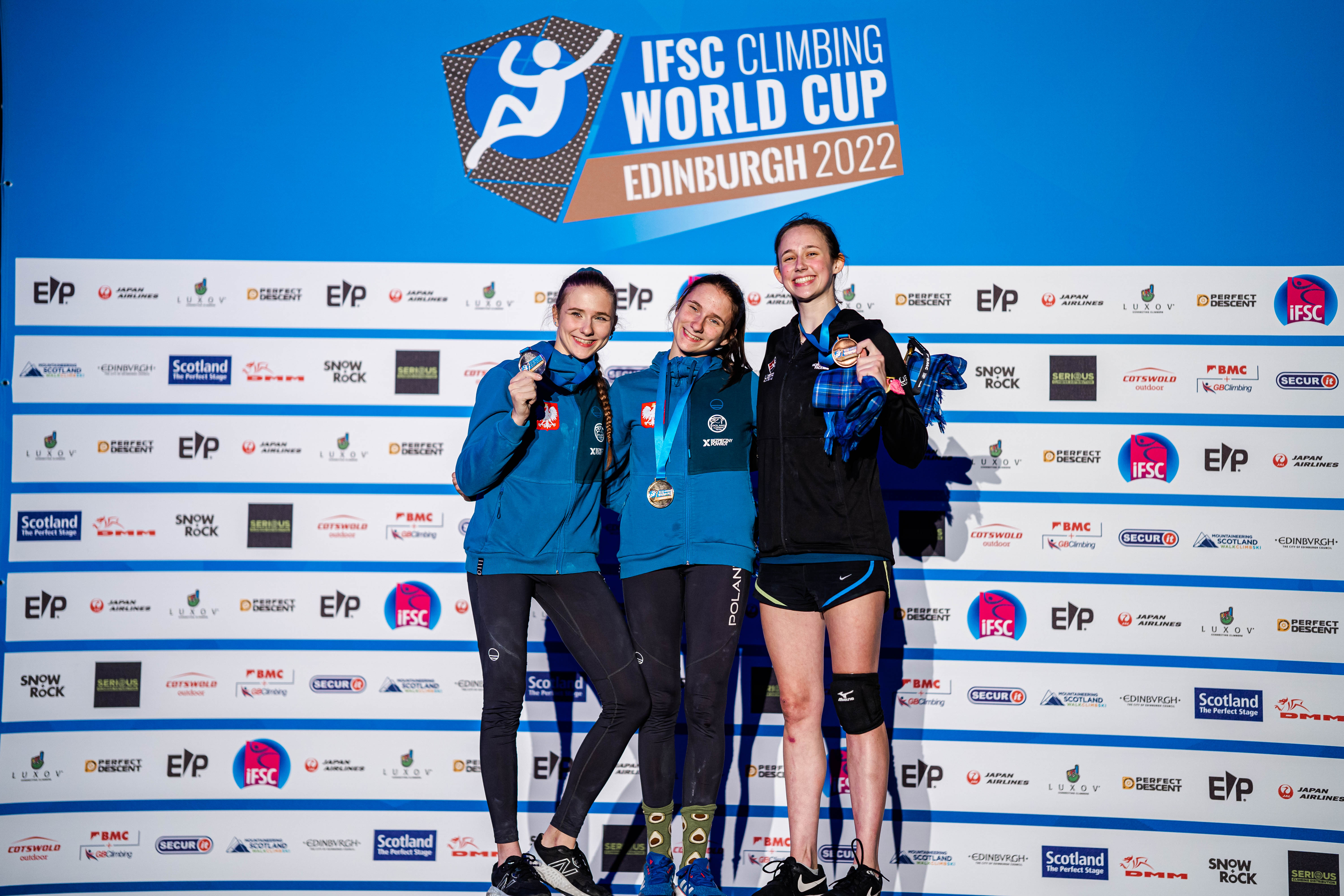 Earlier in the day the Lead competition got underway with both men’s and women’s qualification that involved a fascinating six-way tie at the top of the female category.

At the previous IFSC World Cup event in Kopar, Slovenia, Japan’s Ai Mori spoiled the party when she beat the home favourite Janja Garnbret to gold. By beating Garnbret, Mori broke the total dominance of the Olympic champion who up until that point had won all four of the 2022 season Lead golds on offer.

The two climbers are joined by Italy’s Laura Rogora, USA’s Natalia Grossman, Korea’s Seo Chaehyun and another Japanese climber in Tanii Natsuki at the top of the qualification rankings with all six climbers impressively reaching the top of both routes.

The full women’s Lead qualification results can be found here

In comparison to the women, the make-up of the top six in the men’s qualification isn’t so diverse in nationalities. The Japanese team are again showing their strength in depth with three climbers, USA have two, and Olympic medallist Alberto Ginés López from Spain is the one adding the touch of variety.

Again, in stark comparison to the women, there were only four tops in total throughout the 50 climbers.

Japan’s Homma Taisei and Satone Yoshida, and USA’s Jesse Grupper and Colin Duffy all cemented top six places with tops. Yurikusa Ao of Japan didn’t manage to reach those heights but still performed well across both routes to qualify in second overall.

The full men’s Lead qualification results can be found here

The top 26 Lead athletes will return tomorrow at 11:00 (UTC+1) for semifinals ahead of the best eight going through and competing for medals at 18:00.