Moving from Boulder action at Movement Climbing’s The Hill, the event relocated to Summit Plano for Speed as the Youth A and Junior climbers took to the wall for qualification, finals and the shot at a Youth Worlds medal.

Italy’s Beatrice Colli was the Youth A 2021 champion and felt that added weight coming in to the 2022 edition as she moved up to the Juniors.

Colli began slowly – for her anyway – but built through the day to take gold with a 7.77 run.

“I feel so good now,” said Colli. “I was so exhausted during the day. Last year I won and I really felt the pressure on me from people to win again.

“The past two days I’ve been a bit agitated about this competition and in fact I started really badly. I think it was about nine seconds, two seconds off my personal best. I felt nervous. I decided I needed to just go against the wall and try to find my flow which I managed to do.

“I’ve done World Cup finals but I’ve always made mistakes like slipping so I was extra motivated for this and I’m so happy.”

The one who slipped this time around was silver medallist Nuria Brockfield of Germany who fell in her final against the Italian. Brockfield had also been building her speeds through the rounds but was just short of fully challenging for gold.

Joining her teammate on the podium with bronze was Germany’s Franziska Ritter who beat Oksana Burova of the Ukraine in the small final. 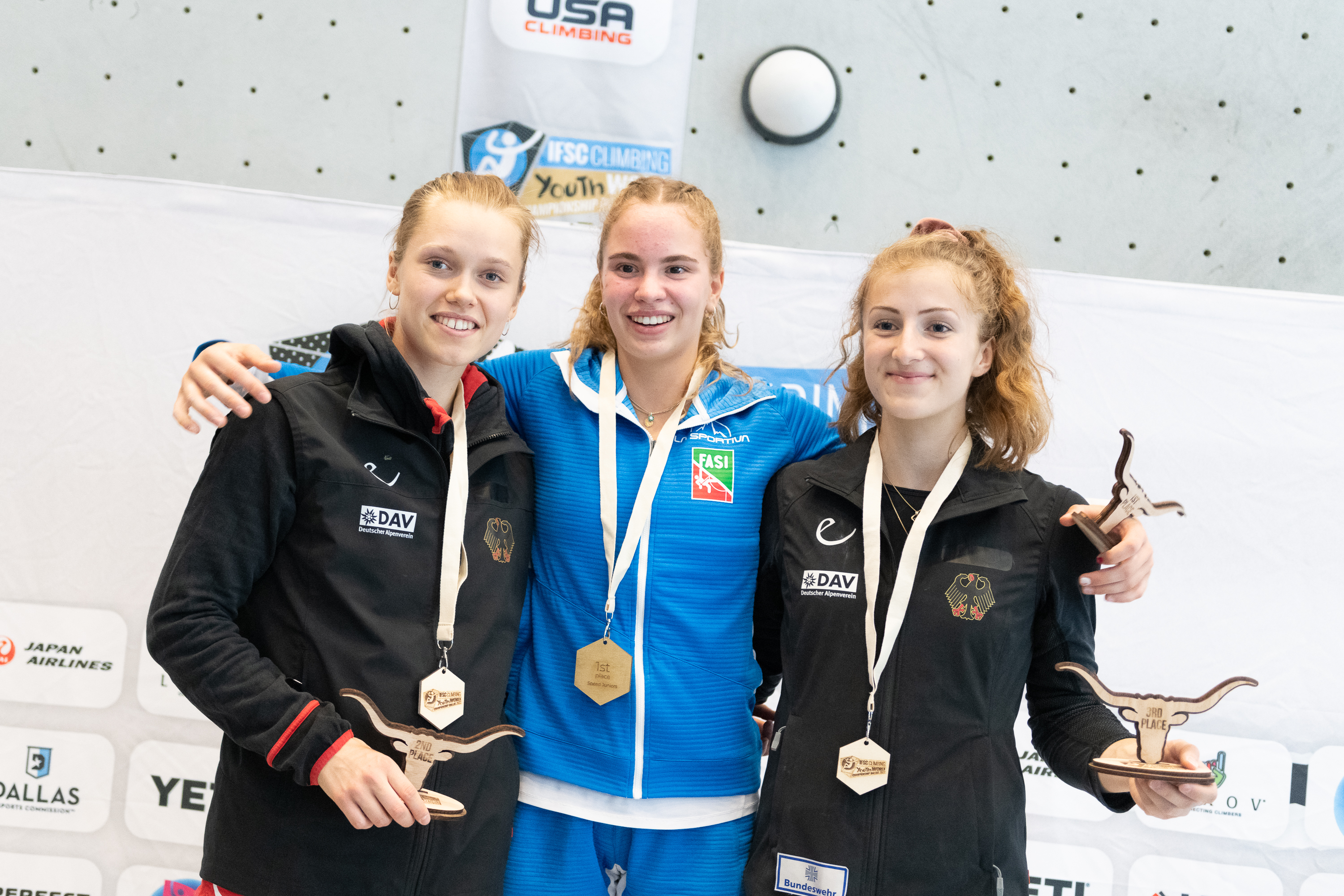 The Junior mens title was taken by Japan’s Shuto Fujino who clocked a time of 5.85 in a close final with silver medallist Hryhorii Ilchyshyn of the Ukraine who tapped at 5.94.

Shuto said: “It’s so cool to win. Amazing. Today I felt good and knew I could do well, I always thought I could be in with a chance to win. Before I started I was confident in my abilities and just trusted in myself.”

Leander Carmanns of Germany completed the podium with a small final win against Thailand’s Aphiwit Limpanichpakdee.

France’s Manon Lebon was the fastest in every round of the Youth A womens finals on her way to winning gold. Her medal was eventually confirmed with a 7.67 time compared to silver medallist Italian Sofia Bellesini’s time of 9.05.

“It’s crazy to the see the work I’ve done in training pay off,” said Lebon. “I didn’t think I went as fast I could have but I knew I had enough in me to be fast up the wall.”

With eight medals in the Boulder, there was another 2022 Youth Worlds medal for Japan as Ai Takeuchi took bronze after beating Anna Maria Apel of Germany in the small final.

Marco Rontini ensured Italy go home with two Speed gold medals taking out the Youth A mens category with his secret weapon to success: “I was a bit nervous, but I actually like that. I find when I’m nervous my concentration is better.

“I was happy with how I climbed and the grip was great on the wall. I didn’t do a personal best but I’m happy about my times. It was such a pleasure to compete with so many amazing athletes and I’m really happy to win.”

Rontini won gold beating Marius Payet Gaboriaud in the final as the Frenchman false started to hand his rival the win. Payet Gaboriaud actually made the final when the USA’s Samuel Watson made a false start after looking like a hot favourite through the qualification rounds with some super quick times which included a Youth A national record of 5.64.

Watson eventually secured bronze with an even quicker record of 5.37 in the small final against Great Britain’s Rafe Stokes. 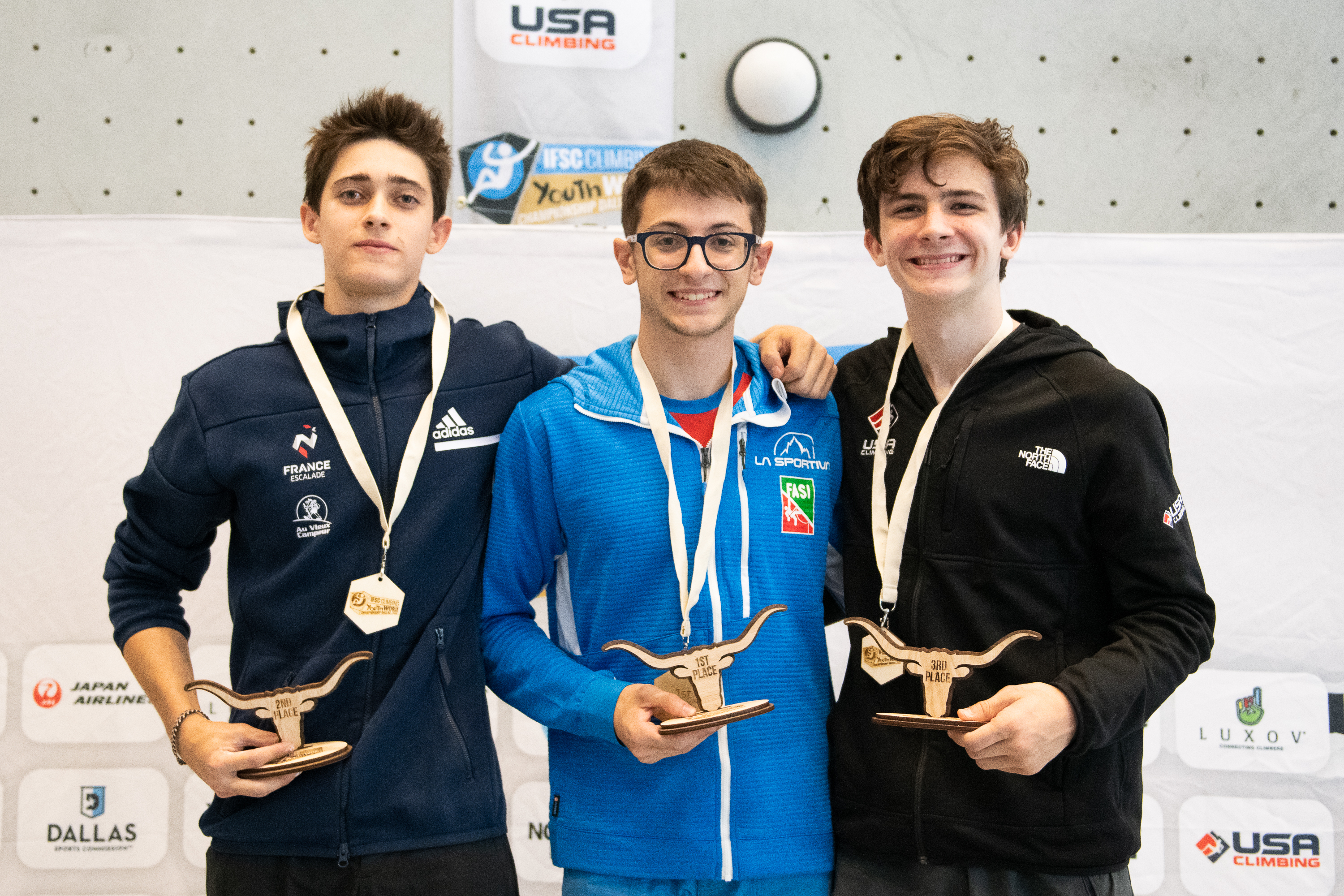