The Polish women dominated proceedings at the European Championships Munich 2022 as they locked out the podium of the women’s Speed final before Ukraine’s Danyil Boldyrev danced with delight at taking the men’s title.

For the third day in a row, a full house at the Königsplatz in Munich, Germany, watched on excitedly as the speedsters went to work on the 15m Speed wall as the crowds cheered every race and tight finish.

Looking at the start list for the women’s event, it was hard to look past a strong Polish squad of five climbers which included a current world champion and world record holder. And they didn’t disappoint.

Three medals were assured for the nation as the semifinal line up was made up of Aleksandra Miroslaw, Natalia Kalucka, Aleksandra Kalucka and Patrycja Chudziak – who knocked out compatriot Anna Brozek in the quarterfinal -  all representing Poland.

World record holder Miroslaw was a second clear of Chudziak in her semifinal and awaited one of the Kalucka sisters who faced off in the other semi. It was Aleksandra who just edged the sibling rivalry to advance for a shot at the gold while Natalia had to battle for bronze.

The final was a tense affair with Miroslaw seeming to stall near the start of the route, but she kept her cool as Aleksandra Kalucka looked to have a stutter of her own to let her rival edge ahead.

Miroslaw tapped the top at 6.922 to take gold with Kalucka just behind with 7.085 and a silver medal.

"I was prepared for this for the whole year,” said Miroslaw. “I was always expecting that my championship competition would be the best one. Sometimes it is not very good, like last year's world championship, but I know that I took a lesson (from that) and I wanted to win here this European title."

In the bronze medal match Natalia Kalucka ensured she joined her sister on the podium by tapping at 7.197 compared to Chudziak’s 7.459.

Natalia Kalucka said: “I’m really happy because this year was really hard for me and I’m very proud of myself and my sister. I like competing with my sister.” 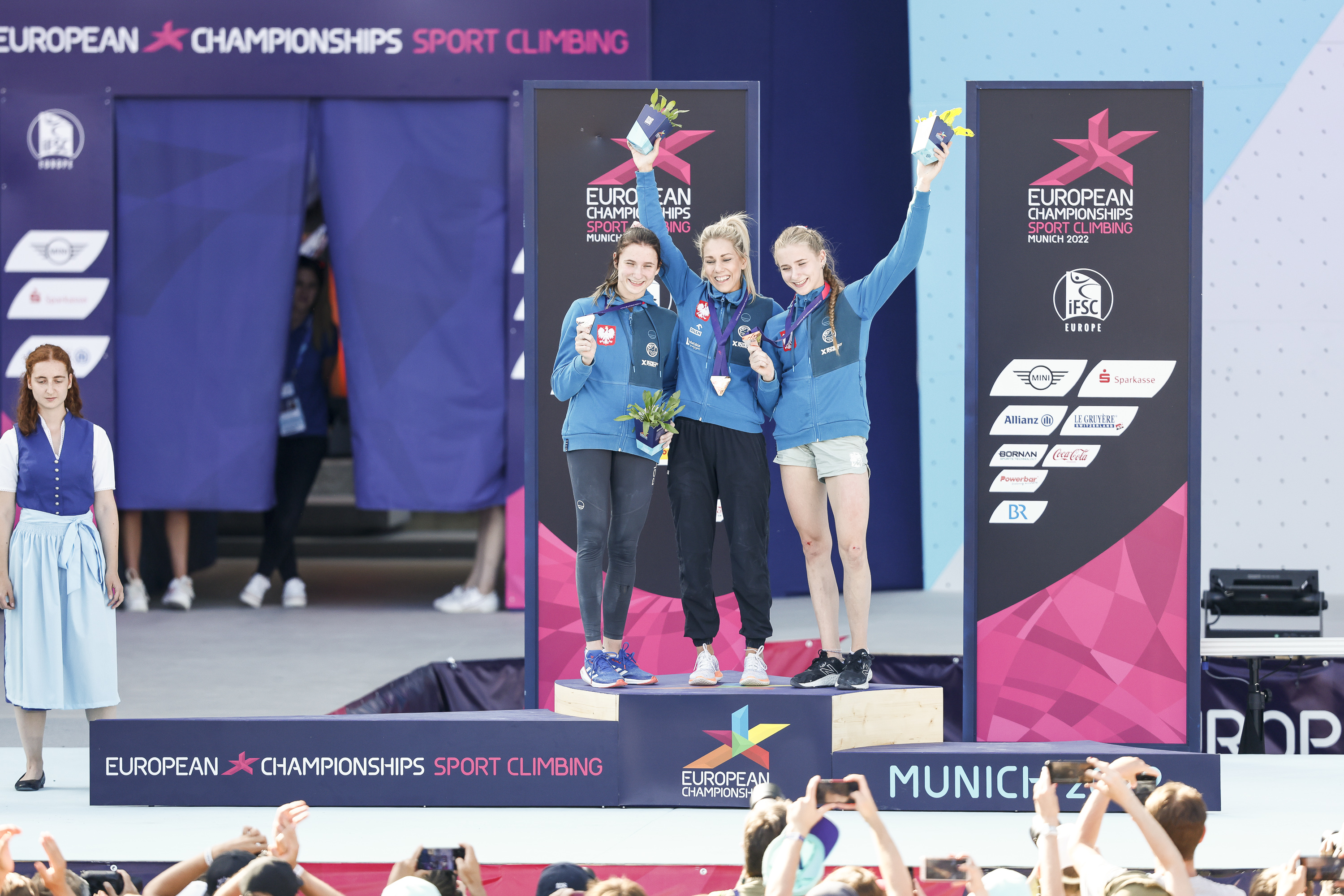 Before Danyil Boldyrev of the Ukraine collected his gold medal in the men’s Speed competition he did a little dance for the crowd and jumped enthusiastically on to the podium. It was a dance of a champion who knew he was going to do something great before anyone had even climbed.

"I was ready for my win, I never give up,” said Boldyrev. “This morning I woke up at 05.00 o'clock. I wasn't nervous, I just woke up because I felt so ready.

"I took about five cold showers today before competition. I was like 'come on, you can do it, you need focus for your good rounds and your gold medal'. It was a good day.”

It was indeed a good day for the Ukrainian who was pretty consistent on times throughout the competition to add a European title to his world championship title. Boldyrev tapped 5.586 in the final match up with former European champion, Poland’s Marcin Dzienski, who tapped at 6.245.

Speaking of his celebration dance, Boldyrev said: "I was very emotional because I really felt the support of the audience. Sometimes, you just have to do what you feel in your heart. You need to do what you feel like doing. Maybe it looked strange, but after climbing my heart just told me to do this."

For his silver Dzienski had to come through a tough and super close semifinal against Spain’s Erik Noya Cardona who had topped the qualification round. Dzienski tapped at 5.452 compared to Noya’s 5.513 to reach the final.

Noya was further disappointed in another close match up against France’s Guillaume Moro with the bronze medal on the line. Moro tapped at 5.551 compared to Noya’s 5.658.

Despite the loss the pair shared an embrace emphasising the respect and camaraderie between all the athletes.

Moro said: "Climbing is really a big family, and it made me happy to compete with him. I don't think he bears a grudge against me, it's really a good feeling."

On his medal Moro said: "I've won some world cup medals, but this is my first European championship medal, and it brings me real pleasure.

“I had lots of emotions. Descending the wall I felt all the emotions rise. It makes up for all the hard work I've done." 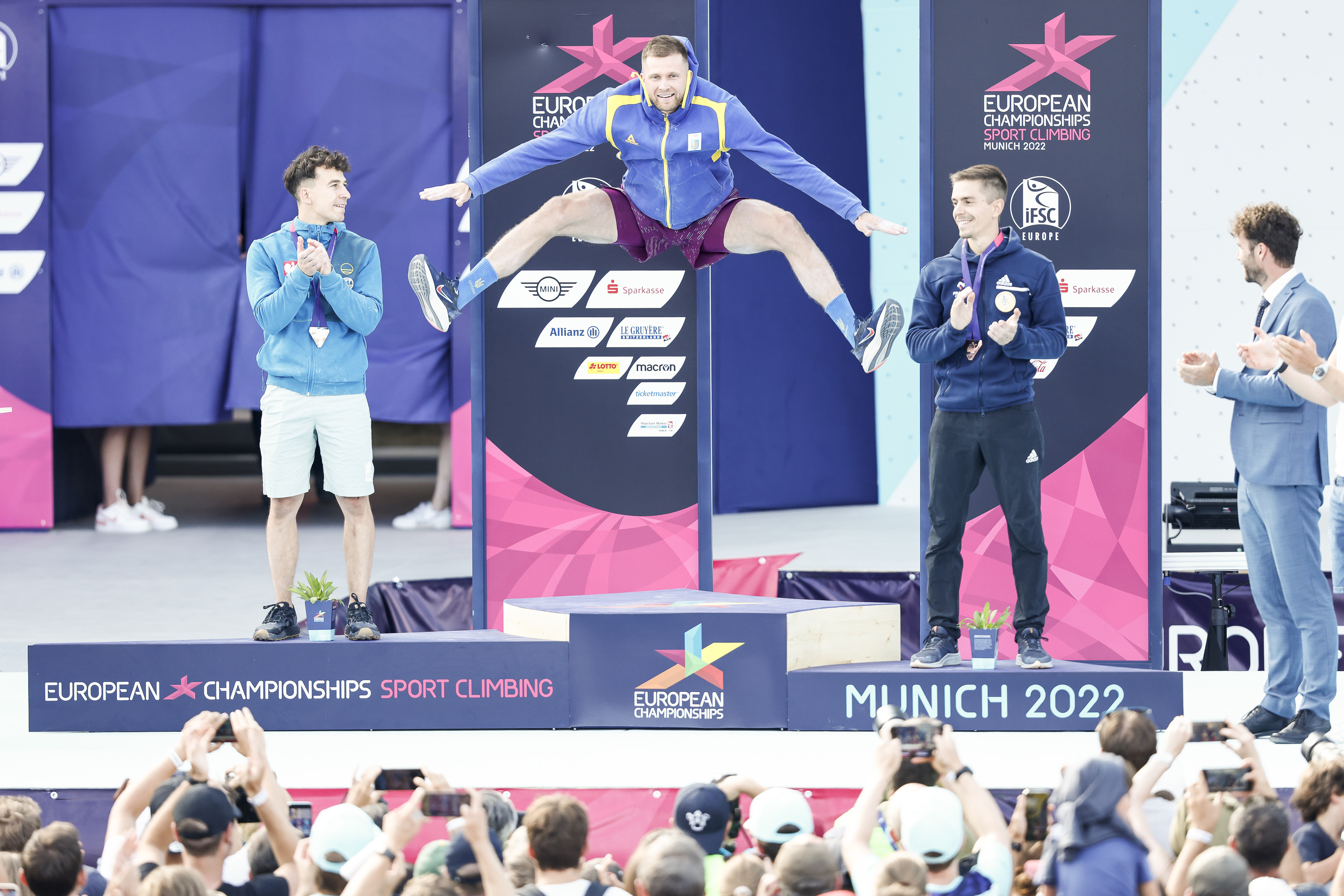