Proud papa Adam Ondra of the Czech Republic, who became a father at the start of the summer, will have a golden story to tell his son when he returns home from the European Championships Munich 2022.

Ondra claimed his second European Championship Lead title tonight with a 37+ scored on a tricky wall that kept all eight finalists from topping.

The 2019 Edinburgh Lead champ made quick work of the first two thirds of the route, which ultimately was the difference between gold and silver on the day. Slovenia’s Luka Potočar, who put up an identical score, finished second, a minute and four seconds slower than the winner.

“My son Hugo was born three months ago,” Ondra said after his victory. “Right before climbing in the final, I was thinking about my son and my wife, and I think it gave me like the ultimate power boost just before I started.”Asked if he was confident of winning gold heading into the final, Ondra laughed and shook his head. “After two days of competition [Boulder and Lead], I still hadn’t recovered because I was destroyed, I was broken,” he said. “The semi-final was a true massacre. I just felt every muscle in my body was aching. But in the final, I saw a route I really liked and I just went for it with no fear. And after that I didn’t make any mistakes, so I am very, very happy.”

Ondra also collected a bronze a day earlier in Boulder.

With the sun setting behind the historic Königsplatz in central Munich, it provided a stunning backdrop for a memorable fight for the finish.

Hanging perpendicular to the ground on hold 24, silver medallist Potočar used his free hand to call for encouragement from the sold-out crowd below, which duly obliged. It was enough to propel him into first before being dethroned by Ondra.

“It was amazing, unforgettable,” the 20-year-old said of the competition. “The climbing maybe wasn’t my best, but I’m happy with it.”

Asked about his rival Ondra, Potočar was gracious in defeat. “He’s amazing, he’s always amazing. Nothing is hard for him, and he was just cruising up there.”

Tokyo 2020 Olympic Champion Alberto Ginés López proved once again that he delivers the goods when it counts, scoring a 35+ to secure bronze.

Olympic bronze medallist and 2021 World Lead Champion Jakob Schubert of Austria qualified for the final in first place after storming to a 46+ in the semifinal, but had to settle for fourth overall.

The home crowd had hoped to celebrate a podium finish with one or both of the two German finalists, Yannick Flohé and Alexander Megos, but had to settle for a celebration of Flohé’s birthday instead, as the duo finished fifth and sixth, respectively. The Essen native turned 23-years-old today.

Rounding out the top eight were Domen Škofic of Slovenia, who was looking for his first podium finish since a silver at the World Cup Briançon in August, and Italy’s Filip Schenk, both of whom posted scores of 17+.

For the full results of the Men’s Lead finals, click here. 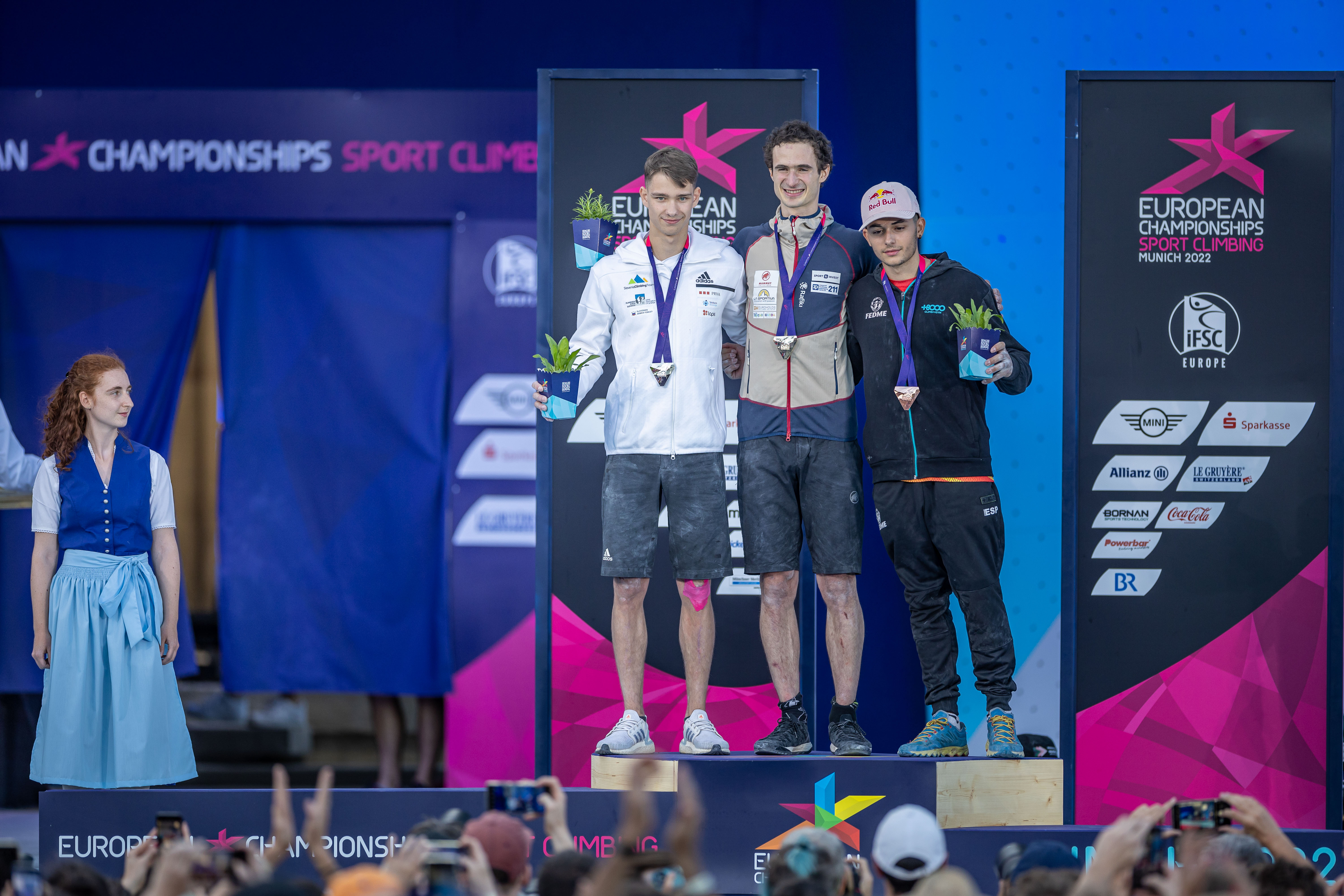