The International Federation of Sport Climbing (IFSC) Lead World Cup Briançon 2022 came to a conclusion this evening, in the heart of the French Alps. In the twelfth consecutive year that an IFSC World Cup has been held in the city, Olympian Janja Garnbret, of Slovenia, and Jesse Grupper, of the USA, each climbed their way to victory and a gold medal.

Battling his way to the highest hold to be grasped during the men’s final, Grupper placed himself firmly atop the podium with a score of 37 and as such, bagged the first World Cup gold medal of his career. In doing so, the American achieved a full medal set of gold, silver, and bronze during the 2022 Lead season so far, having won silver in Villars, Switzerland, and bronze in Innsbruck, Austria.

“I’m still pretty much in shock and super psyched! I feel like that was probably one of the worst climbed routes of my life in some ways, but also I was just so psyched to keep fighting through each move and it felt so good to pull it off,” said Grupper with a grin from ear to ear.

“It was very intense and I was very nervous about this move, but I was just like ‘you just have to get this next hold and it will get better, you just have to go one more move’. I think just having that mentality paid off in the end,” he added.

Japan’s Homma Taisei took second place with 35+, earning his second consecutive World Cup silver medal – after also achieving a podium position in Chamonix, France, earlier this month.  The Japanese athlete now has four IFSC World Cup medals to his name, having secured another silver back in 2019, and a gold medal at the IFSC Lead World Cup Villars 2022.

German Olympian Alexander Megos claimed the final medal in the men’s event, taking bronze with the same score as Homma. Megos ranked lower than Homma due to his score in yesterday’s semi-final. A bronze medal win saw the Olympian climb onto a World Cup podium for the first time this season – his last medal being at the IFSC Lead World Cup Villars 2021.

Finishing in fourth position was Megos’ teammate Yannick Flohé, who matched both Homma and Megos’ score but again, ranked lower due to his semi-final result. American Olympian Colin Duffy concluded in fifth with 34+, followed by Japan’s Ogata Yoshiyuki in sixth with the same score. In his first Lead final, Italy’s Filip Schenk finished in seventh with 27. Great Britain’s Hamish McArthur took eighth place with 25, and Slovenia’s Luka Potocar completed the competition in ninth, with 18+. 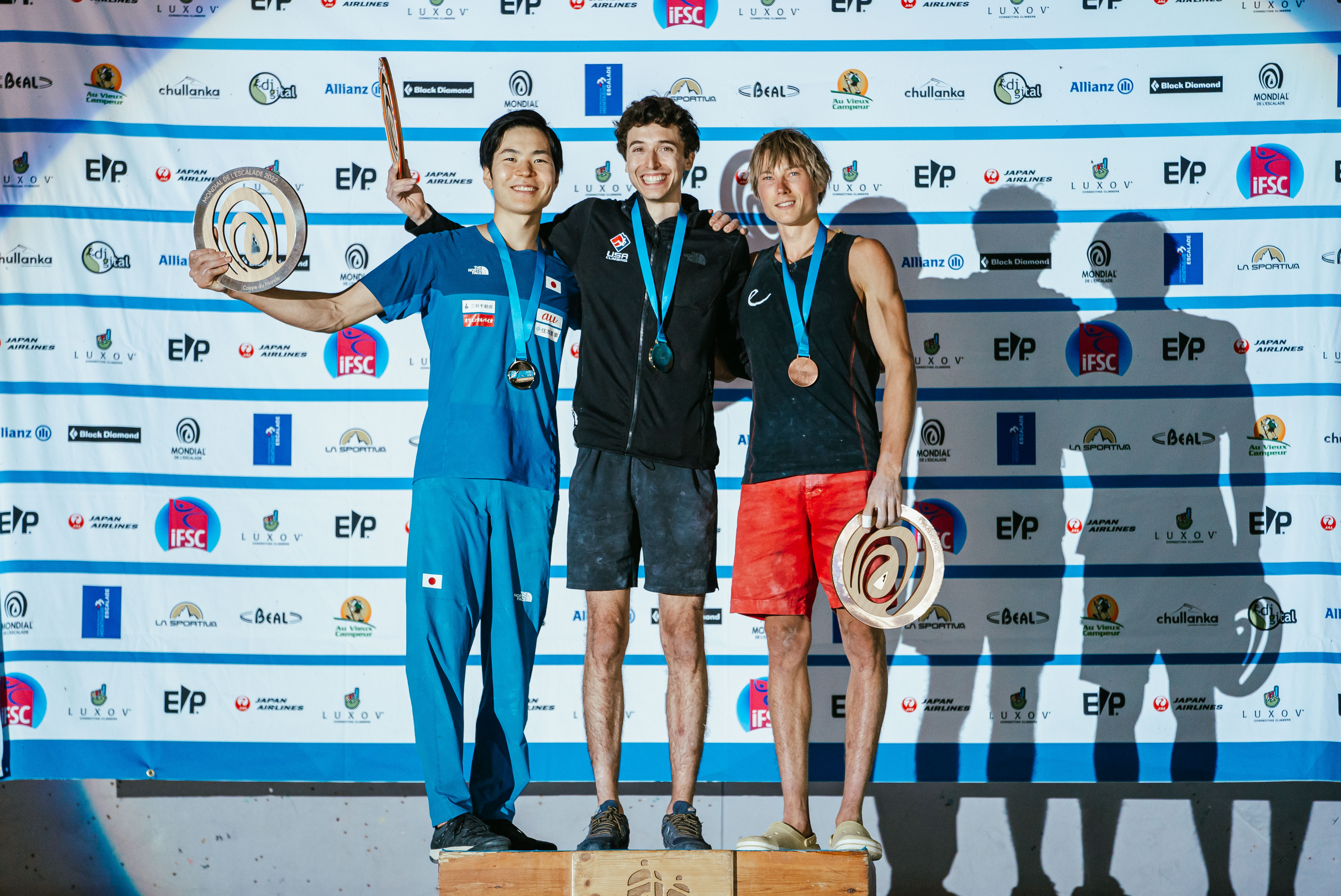 The podium of the men's Lead event in Briançon, France
Photo: Lena Drapella/IFSC

Brushing the top hold with her fingertips, Olympic gold medallist Janja Garnbret threw herself into first place in the women’s final. With a score of 42+, the Olympian earned the 53rd World Cup medal of her career to date – her 36th gold. Winning four out of a possible four Lead World Cups so far this season, Garnbret claimed her 22nd gold medal in Lead, placing the Slovenian third in the all-time Lead World Cup ranking behind South Korea’s Jain Kim, with 29 wins, and Austria’s Angela Eiter with 25.

“I was really excited, at observation the route looked super cool and I really enjoyed climbing. Some sequences seemed tricky at observation, but then it was all okay – climbable and super nice,” said Garnbret after taking the gold medal.

Olympian Seo Chaehyun, of South Korea, took the silver medal with a score of 41+, climbing atop a World Cup podium for a tenth time since making her senior debut in 2019. The reigning Lead World Champion has claimed three medals so far this season, taking silver in Innsbruck and bronze in Chamonix.

In third position was the USA’s Natalia Grossman, who concluded the competition with 41 and claimed her second Lead medal of the year – having won six medals during the 2022 Boulder season. Tonight, the American earned her sixteenth World Cup medal to date.

Matching Grossman’s score was her teammate – Olympian Brooke Raboutou – who finished in fourth place based on her lower score than Grossman in the semi-final. Japan’s Tanii Natsuki and Italian Olympian, Laura Rogora, each achieved 37+, yet ranked a respective fifth and sixth again counting back to the previous round. Vita Lukan, of Slovenia, placed seventh with a score of 18+, matched by Japan’s Nakagawa Ryu, who placed eighth. 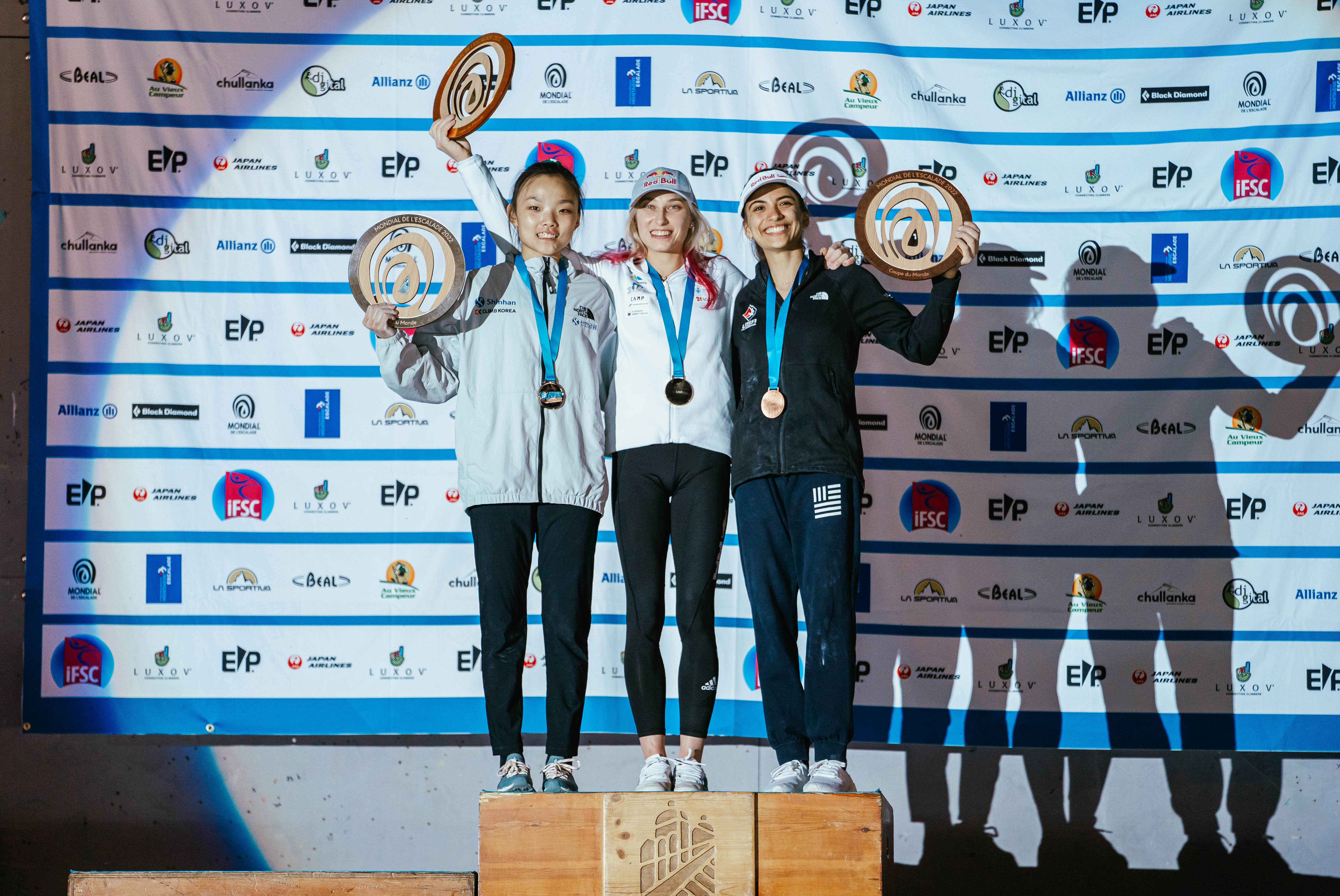 The podium of the women's Lead event in Briançon, France
Photo: Lena Drapella/IFSC

Following a hiatus in August, the final three competitions of the IFSC World Cup Series 2022 are to take place in September and October, starting with Lead in Koper, Slovenia, from 2 to 3 September. News and updates on the event will be available on the IFSC website and on the Federation's social media profiles: Facebook, Instagram, and Twitter.