Below the dramatic backdrop of Mont Blanc in Chamonix, France, this evening saw the continuation of the eighth stage of the International Federation of Sport Climbing (IFSC) World Cup Series 2022. After dominating the Speed podiums last weekend in Villars, Switzerland, China climbed atop the scoreboard once again in Chamonix, with Deng Lijuan taking the win in the women’s event, and Long Jinbao placing first in the men’s.

Fresh from the top step of the podium in Villars, China’s Deng Lijuan defended her gold medal position in Chamonix by stopping the clock at 6.55 seconds in the women’s final – a new Asian record. Deng therefore added a second World Cup gold medal to her collection, in addition to the gold medal she claimed at the Youth Asian Championships Chongqing 2018. Competing alongside Deng in the final, Poland’s Aleksandra Kalucka tapped the finish pad in 6.64 seconds, achieving second place and a new personal record. A silver tonight marks Kalucka’s fifth IFSC World Cup medal.

“I’m really happy! Thank you so much,” said Deng when congratulated on her second consecutive gold medal win. Having claimed the bronze medal in Villars, China’s Long Jinbao climbed onto the podium once more in Chamonix - but this time, in first place. Coming dangerously close to the Speed world record set by Indonesia’s Kiromal Katibin during yesterday’s qualification round, Long stopped the clock at 5.11 seconds in the final and as such, earned his second ever IFSC World Cup medal, and his first gold. Spain’s Erik Noya Cardona climbed against Long in the men’s final, tapping the finish pad in 5.49 seconds and earning the silver medal. Despite having taken silver in Speed at the IFSC Climbing World Championships Moscow 2021, this is the Spaniard’s first World Cup medal win.

“I want to thank all the people who have supported me in becoming the champion. This is the result of my hard work and training!” said Long after taking his first gold medal.

The men’s small final saw a battle between teammates Aspar Aspar and Veddriq Leonardo, of Indonesia. With a time of 5.53 seconds, it was Aspar that claimed the final podium position and his seventh World Cup medal, while past Speed world record holder Leonardo missed out on a medal in fourth place, finishing in 6.59 seconds. 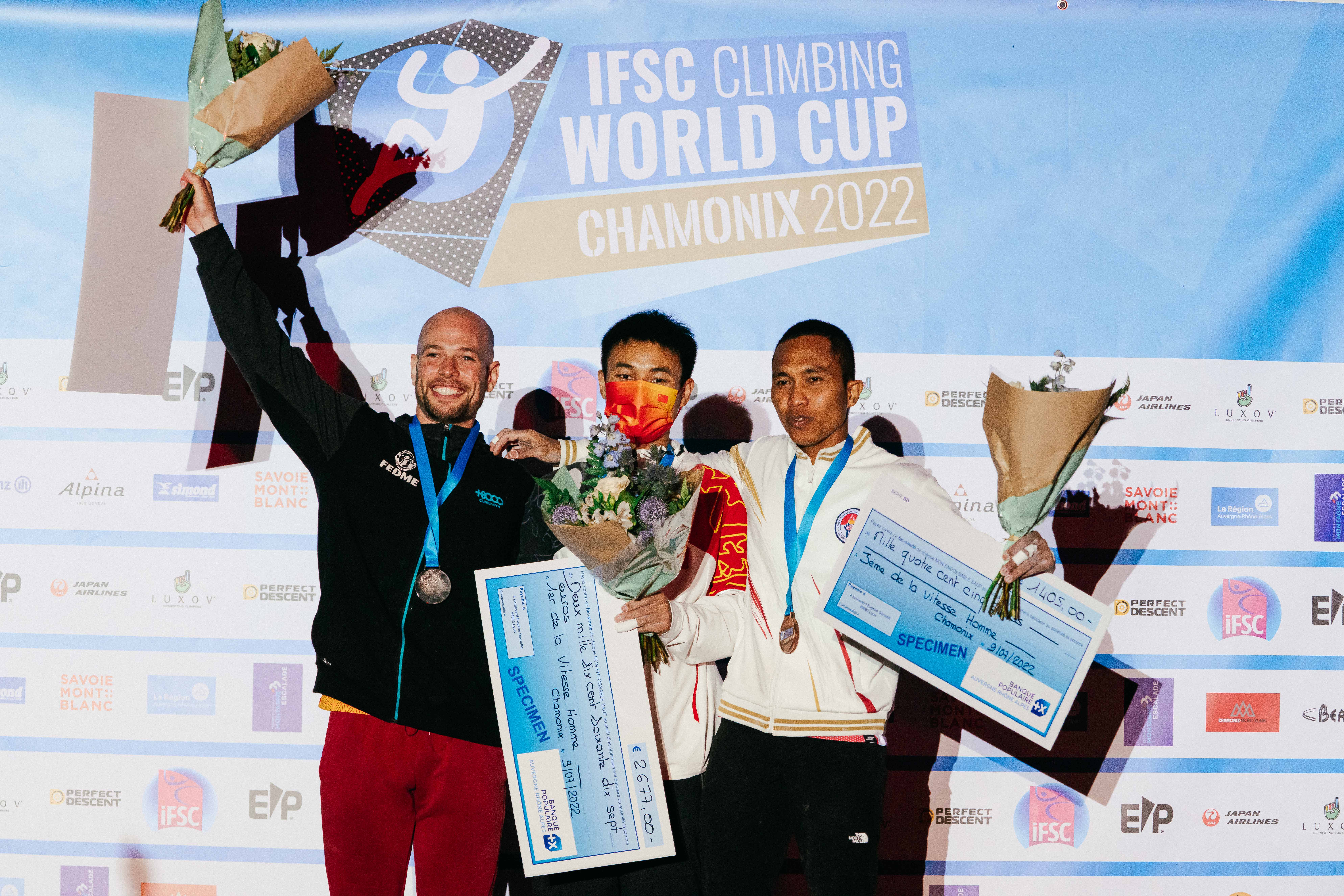 The IFSC World Cup Chamonix 2022 will continue tomorrow with Lead semi-finals at 10:00 AM (UTC+2:00), followed by finals from 8:30 PM. News and updates on the event will be available on the IFSC website and on the Federation's social media profiles: Facebook, Instagram, and Twitter.