With a score of 36+, Homma climbed his way onto the top step of the podium in the men’s final, taking his first World Cup gold medal. The Japanese athlete adds this to the silver he earned at the IFSC Lead World Cup Xiamen 2019. Having made the final at the first Lead World Cup event of the 2022 season last weekend in Innsbruck, Austria, Homma missed out on the podium in ninth position. He therefore upped his game this weekend to secure his first win.

“In Innsbruck I felt very sad because of my result, so this time I felt that I need to try my best. First of all I tried to concentrate, just to be myself. In the semi-final I didn’t feel so good about my performance and after the semi-final I got a lot of messages from my friends in Japan, so that’s why I did my best in the final, because of the cheering of my Japanese friends,” said Taisei after taking the win.

In second place was last week’s bronze medallist Jesse Grupper, of the USA, who achieved the silver medal with a score of 34+. Grupper therefore took home his second ever World Cup medal. His teammate – Olympian Colin Duffy – claimed third place with 34, earning his third medal of the season. Duffy made history last weekend, by becoming the first male to secure the win in both Boulder and Lead at the same competition.

Germany’s Yannick Flohé missed out on the podium by one position in fourth, with a score of 33. Yoshida Satone, of Japan, placed fifth with 27+, while his compatriot Ogata Yoshiyuki ranked sixth with 26+. France’s Mejdi Schalck placed seventh, scoring 19+, and Japan’s Yurikusa Ao placed eighth with 18+. 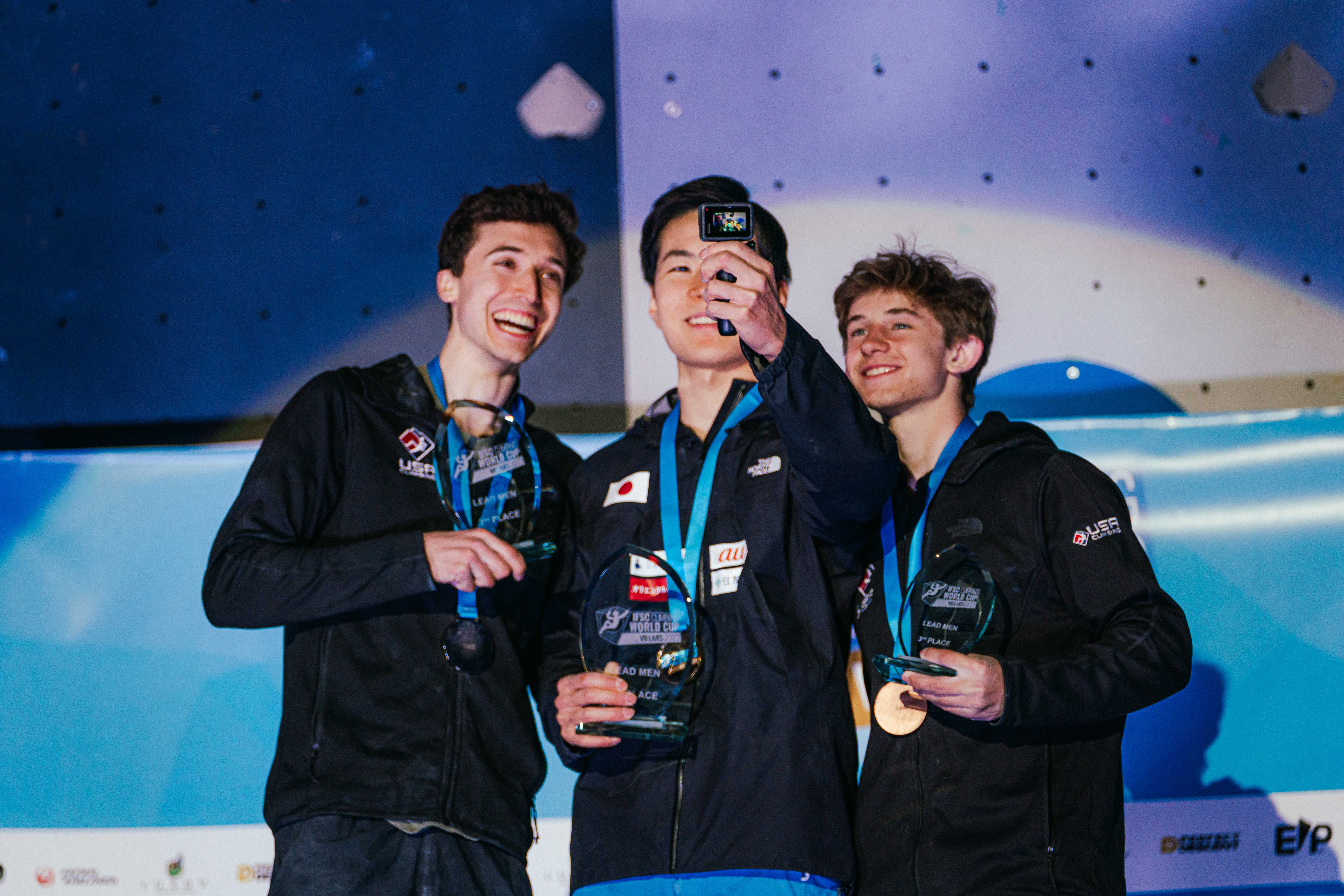 The podium of the men's Lead event at the IFSC World Cup Villars 2022
Photo: Lena Drapella/IFSC

Securing the only top of the night, Slovenian Olympian Janja Garnbret deservedly earned the fiftieth IFSC World Cup medal of her career so far. It is the 34th gold medal that the Olympic gold medallist has been awarded on the World Cup circuit, 20 of which she has won in Lead. Garnbret also holds a total of seven World Championship medals, including six gold.

“I feel amazing, this was one of the best routes on the circuit. I feel that I was climbing with flow and just enjoying myself on the route. I was also climbing super fast, so I enjoyed it very much,” said Garnbret after stepping onto a World Cup podium for a fiftieth time.

“In Innsbruck I felt kind of rusty because I haven’t had any comps except Meiringen this year, but then after semi’s I felt in the flow so I could do the same in Villars, so it feels amazing. I feel that this was easier than Innsbruck. Innsbruck was really the hardest route I’ve ever climbed. This one I feel like at observation it looked harder, but the hardest part was just the last two moves. I really enjoyed it. It had some tricky parts where you had to be careful, but nevertheless I enjoyed it,” she added about this evening’s route.

Fellow Olympian Brooke Raboutou, of the USA, placed second with 37+, therefore taking the silver medal. The American has had a stellar season so far, having claimed three medals in Boulder – one silver and two bronze – and two in Lead – tonight’s silver, in addition to a bronze medal in Innsbruck last weekend.

Natalia Grossman, Raboutou’s teammate and best friend, secured the bronze medal with 35+. As such, Grossman climbed onto a World Cup podium for a 15th time, having bagged eight medals in 2021, and seven so far this season.

Italian Olympian Laura Rogora placed fourth with 31+, followed by France’s Manon Hily in fifth with 28+. A second attempt was awarded to Hily in tonight’s final, following a technical incident in which she was not given enough rope. Olympian Seo Chaehyun, of South Korea, placed sixth with 17+, while Japan’s Nakagawa Ryu and Tanii Natsuki scored a respective seventh and eighth, also with 17+. As the trio achieved the same score in this evening’s final, they were ranked based on their score in this morning’s semi-final. 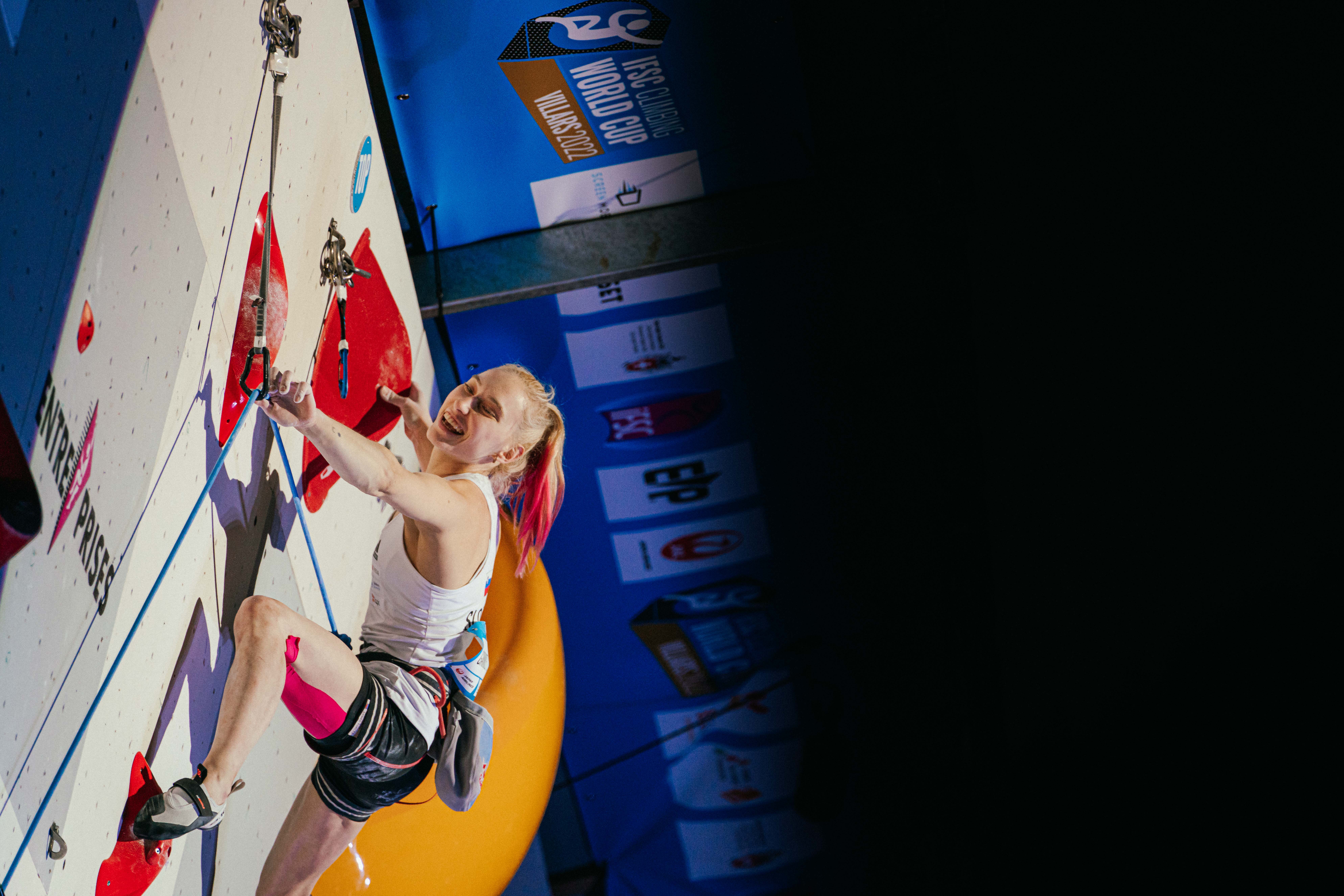 The next edition of the IFSC World Cup Series 2022 will take place in Chamonix, France, where events in Lead and Speed will be held from 8 to 10 July.