The International Federation of Sport Climbing (IFSC) Boulder World Cup Series 2022 concluded at the Kletterzentrum in Innsbruck, Austria, this evening, where USA’s Natalia Grossman bagged her fifth gold medal of the season. In doing so, the American became the overall 2022 IFSC Boulder World Cup champion.

With four tops and four zones – three of them flashes – Grossman successfully secured the win tonight, earning her sixth and final podium position of the 2022 Boulder season. The reigning Boulder World Champion obtained a silver medal in the opening World Cup of the year and subsequently, has stepped onto the top step of the podium with a gold medal in each round since. In doing so, Grossman guaranteed the season win – her second consecutive overall Boulder World Cup victory – before even setting foot off the ground in tonight’s final. The American was awarded 5,000.0 points in the overall ranking and thus, is the fifth female athlete in history to have won more than one World Cup Series. Moreover, Grossman is now one of only four women to have won five or more World Cups within one season.

“It hasn’t even sunk in really. I’m speechless!” said Grossman after taking the season title.

When questioned about the final bloc of the night, she commented: “You couldn’t really see the hold that you were going for. I love crimps so I was like ‘I know if I find the hold, I have a good chance of sticking it’. I gave it what I’ve got!”

Hot on Grossman’s heels in second place was Hannah Meul of Germany, who concluded the competition with an almost identical score to the American, bar one additional attempt on boulder three. With four tops, four zones, and just one more attempt than Grossman, the German consequently claimed the silver medal – her second consecutive podium finish and the second World Cup silver medal of her career so far.

Completing this evening’s podium line-up was Olympic silver medallist Nonaka Miho, of Japan, who took the bronze medal with two tops and two zones. Positioning herself on the podium for the third time this season, the Olympian secured second place in the overall Boulder season ranking, with a total of 3,210.0 points.

With one top and two zones each, Japan’s Ito Futaba and South Korea’s Seo Chaehyun placed a respective fourth and fifth in tonight’s final – their scores differentiated by just one attempt. Kikuchi Saki placed sixth, with zero tops but two zones.

Taking the final podium position in the overall Boulder World Cup 2022 ranking was Olympian Brooke Raboutou, of the USA. Having stood atop the podium three times this year, the American claimed third place in this year’s Boulder World Cup with 2,940.0 points, therefore joining teammate and best friend Grossman on the podium again tonight.

For the full results of the women’s Boulder event in Innsbruck click here.

Tomorrow will see the opening of the IFSC Lead World Cup Series 2022, with qualifications commencing at 9:00 AM (UTC+2:00). Lead semi-finals will then take place from 7:00 PM, with finals to be held from 7:00 PM on Sunday. 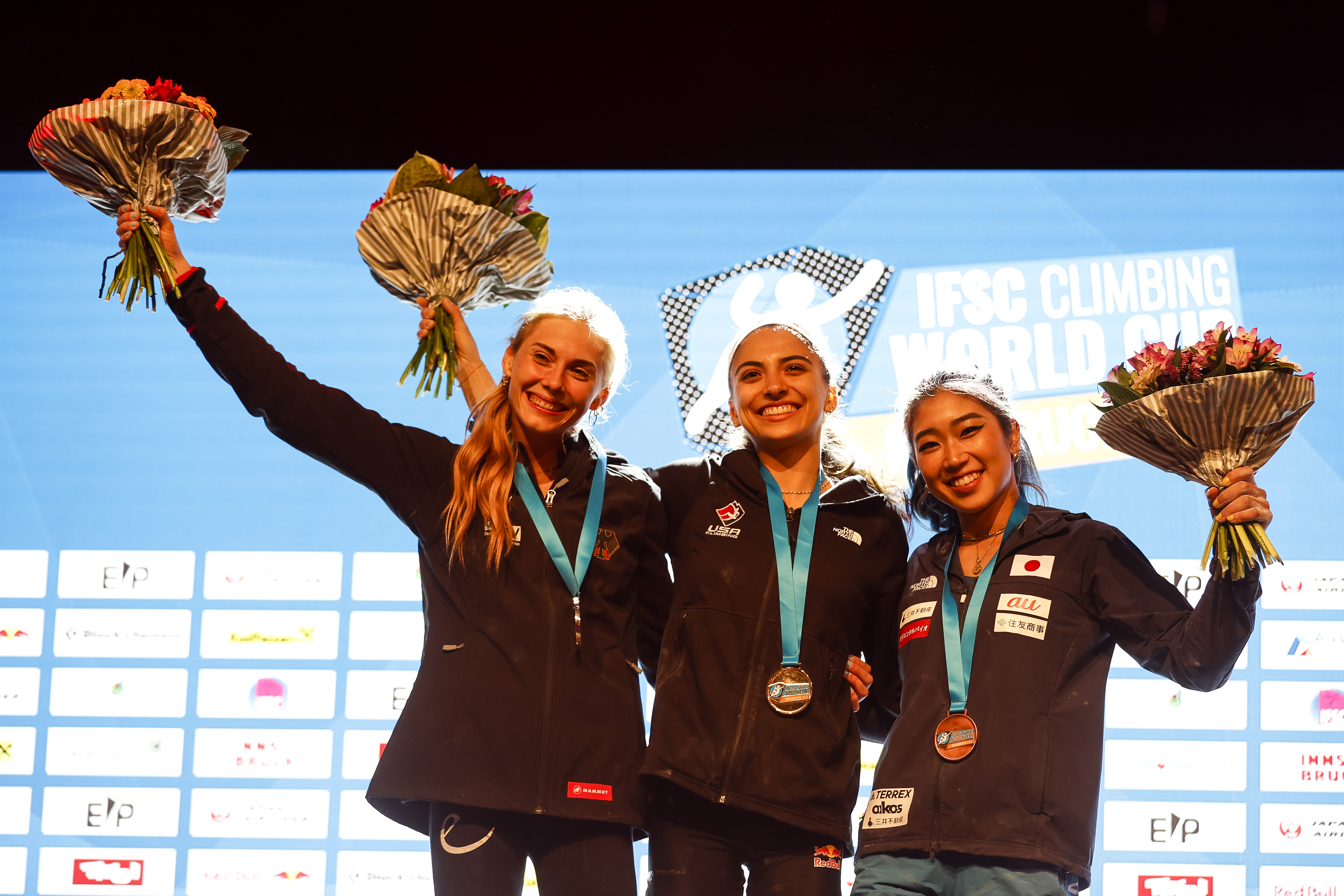 The podium of the women's Boulder event at the IFSC World Cup Innsbruck 2022
Photo: Dimitris Tosidis/IFSC