This evening saw the conclusion of the women’s event at the International Federation of Sport Climbing (IFSC) Boulder World Cup Brixen 2022, where in an intense head-to-head battle against Germany’s Hannah Meul, Natalia Grossman of the USA triumphed.

With four tops and four zones, Grossman achieved her sixth IFSC World Cup gold medal to date – four of which she has obtained during the 2022 season so far. The American put on a spectacular performance by flashing three out of four boulders in tonight’s final, after having flashed every single bloc in the previous two rounds. As such, Grossman deservedly earned her fourth consecutive first place finish.

“I’m really grateful and excited for more. I feel like at least during the qualification and semi-final rounds, I had the most fun I’ve had in a really long time. It felt really good to compete without pressure again, because in Salt Lake I had a lot of pressure. Hannah definitely kept me on my toes the whole final round so that was kind of fun dealing with the pressure, but I’m glad I was able to keep it together,” said Grossman following her win.

“I’ve been focusing mainly on boulders this year, but I’m very excited to get the opportunity to compete in Lead because I love Lead climbing. We’ll see how it goes!” she added when questioned about the upcoming IFSC Lead World Cup season.

Matching Grossman’s score of four tops and four zones, Meul of Germany placed second due to using just one more attempt than the American. Flashing two of the final blocs, Meul climbed atop her first ever IFSC World Cup podium and walked away with a silver medal around her neck.

Completing the podium was China’s Luo Zhilu, impressively bagging a bronze medal in her debut IFSC World Cup with two tops and four zones. After a stellar first appearance on the international Sport Climbing circuit, the 16-year-old climber is pinned as one to watch moving forward.

Olympic silver-medallist Nonaka Miho, of Japan, just missed out on a podium position in fourth place, with one top and four zones. Her teammates Matsufuji Anon and Okawachi Serika ranked fifth and sixth respectively, with Matsufuji achieving one top and three zones, and Serika securing zero tops but three zones.

For the full results of the women’s Boulder final click here. 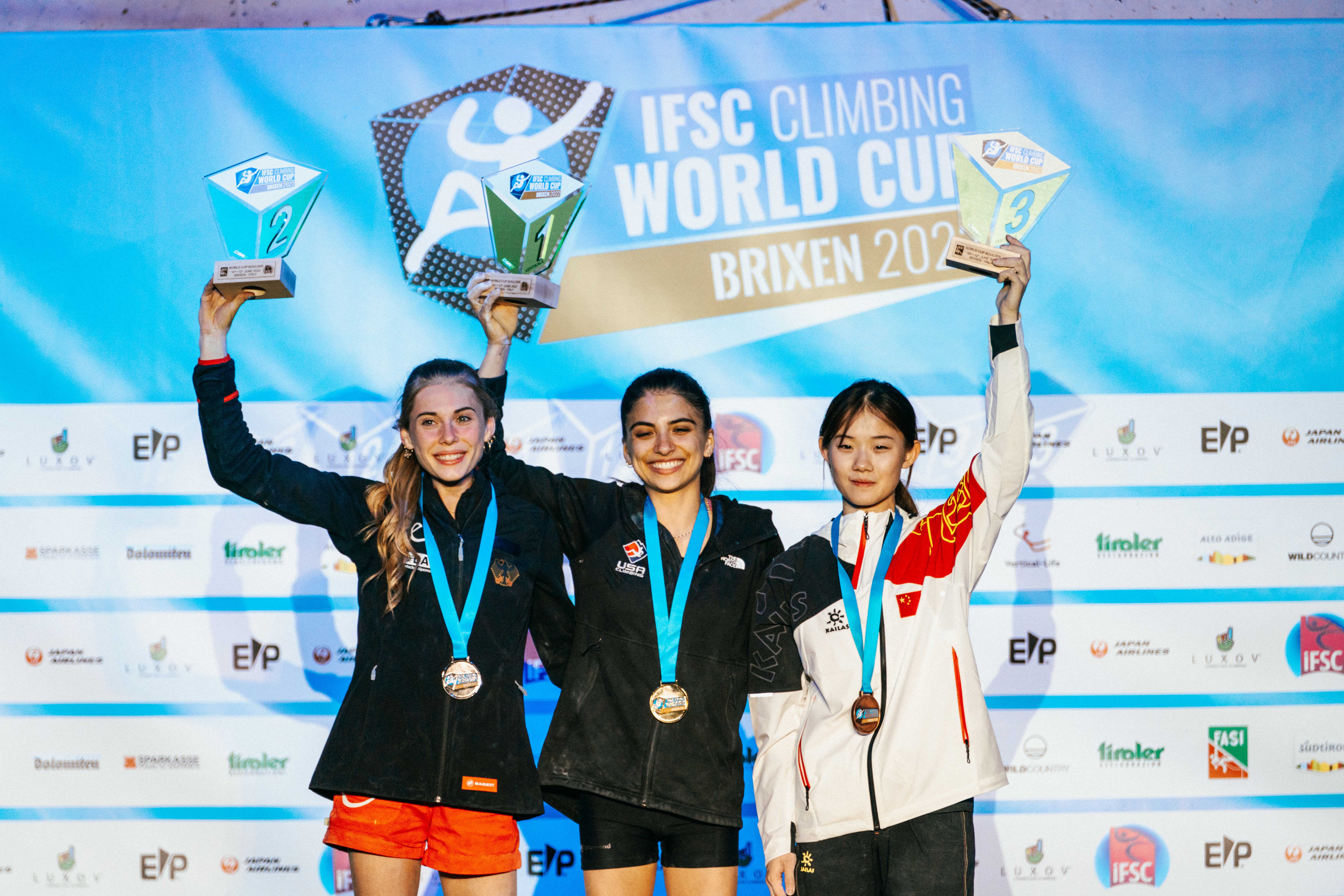 The podium of the women's Boulder event at the IFSC World Cup in Brixen, Italy
Photo: Lena Drapella/IFSC