The first medals of the International Federation of Sport Climbing (IFSC) season were awarded in Meiringen, Switzerland, this evening, with Olympic gold medallist Janja Garnbret, of Slovenia, claiming an emotional win in the women’s final of the IFSC Boulder World Cup Meiringen 2022.

After flashing – using only one attempt – three out of four boulders, Slovenian Janja Garnbret bowed to the cheering crowd of the Kletterhalle Haslital, before embracing her fellow finalists. The 23-year-old achieved four tops in five attempts in the season-opener, and perhaps would have flashed all four had it not been for a false-start on the first bloc – of which she was the only athlete to secure a top, clinging to the dual-textured holds which defeated her competitors. Cruising through a burly final boulder, the Olympian earned an impressive 32nd gold World Cup medal of her career to date.

“Today’s win was a privilege. It means a lot to me because it’s not obvious that you will win every competition – each competition is a story in itself. Just because you won everything last year doesn’t mean that you can next year, so every win means a lot to me. That’s why I was so emotional!” said Garnbret.

“I’ve decided to skip the [rest of the] Boulder season this year. The Olympics last year were a pretty hard take on physical and mental preparation, so I feel that I need a little time off from comps and this year is the perfect year to do that. I already have [the Olympic Games in] Paris in mind!” she added.

Having taken the 2021 World Cup season by storm with a remarkable eight podiums, reigning Boulder World Champion Natalia Grossman, of the USA, took the silver medal in Meiringen this evening. Hot on Garnbret’s heels, the 20-year-old American completed the competition with three tops and four zones, proving her prowess by flashing the final two boulder problems with a grin from ear to ear.

Much to the delight of her home crowd, Switzerland’s Andrea Kümin climbed onto the podium in third position, beaming after bagging the first World Cup medal of her career. The 24-year-old concluded the opening competition of the season with one top and two zones.

Full results of the women’s final can be viewed here.

The evening also saw medals awarded to the top-ranked female athletes of the 2021 IFSC Boulder season. Natalia Grossman took the top ranking and thus, first place on the podium with 345 points, followed by Janja Garnbret with 280 points, and Oriane Bertone with 235 points. The full 2021 women’s Boulder World Cup ranking can be viewed here.

For information about broadcasting and live streaming of the IFSC Boulder World Cup in Meiringen click here. News and updates about the event will also be available on the IFSC website, and on the Federation’s social media channels: Facebook, Instagram, and Twitter. 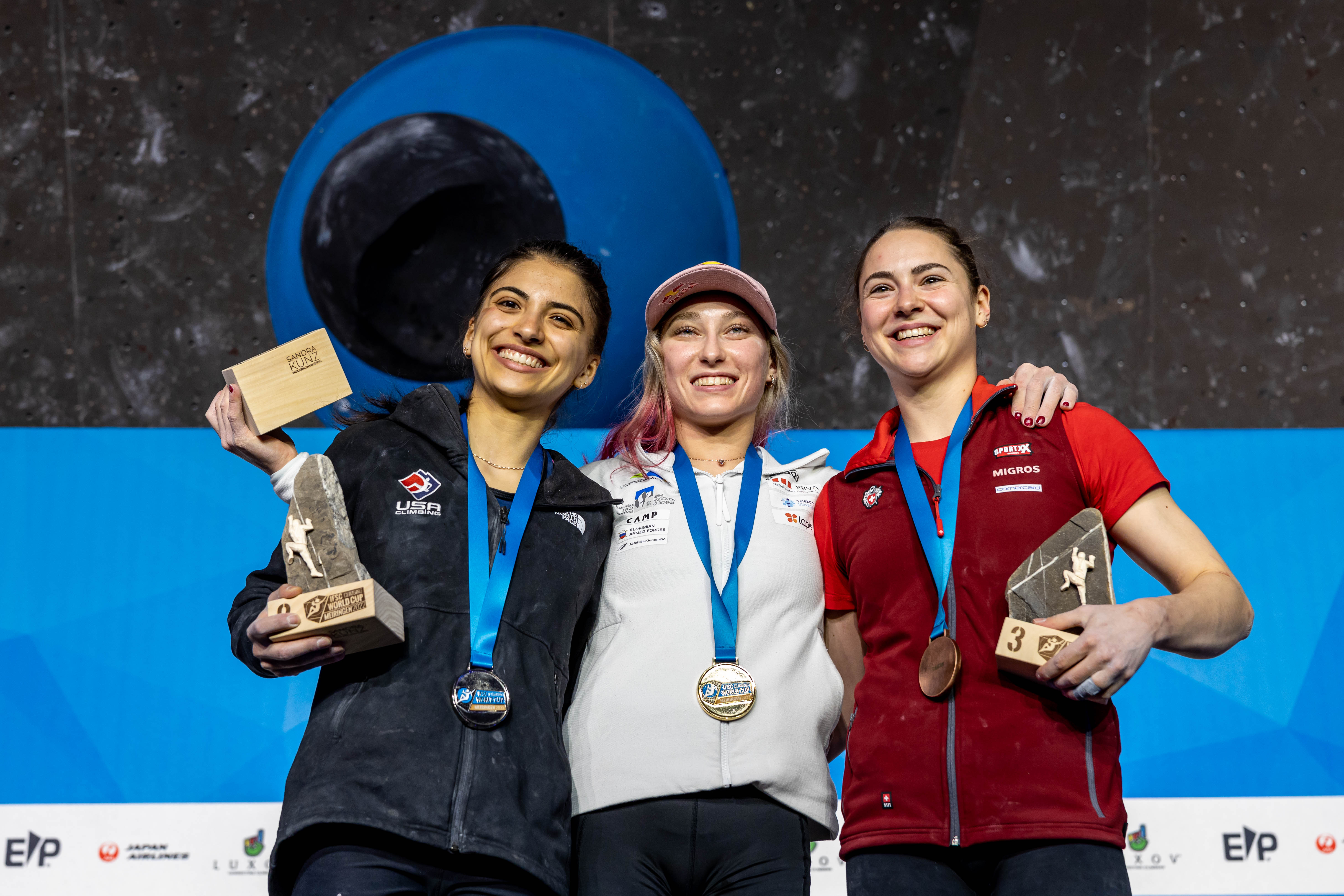