The men’s Youth A Lead semi-final round kickstarted the day, with France’s Mejdi Schalck (17) and Japan’s Junta Sekiguchi (16) both achieving tops and thus, earning their places in tomorrow’s final. Sekiguchi’s teammate Haruki Uemura (17), who took silver in Lead during the 2019 championships, placed third in the semi-final with a score of 36+. Hannes Van Duysen (16) of Belgium, who won the gold medal in the men’s Youth A Boulder final earlier this week, qualified for tomorrow’s Lead final in sixth place with 27+.

Through to the men’s Youth A Lead final are:

In the women’s Junior Boulder qualification, Naile Meignan (17) of France took the top spot with six tops and six zones – the only athlete to top all boulder problems in the round. Achieving second place was Germany’s Anna Lechner (18) with five tops and fives zones and in third, women’s Junior Lead gold medallist Nonoha Kume (17), of Japan. Lucija Tarkus (17) of Slovenia, who ranked second in the women’s Junior Lead final, qualified for the Boulder semi-final in fourth place.

Next up was the women’s Youth A Boulder qualification, in which the USA’s Kylie Cullen (16) was the only athlete to secure a top on all six blocs, therefore placing herself in first position heading into tomorrow’s semi-final round. 16-year-old Sara Copar, who took the win in the women’s Youth A Lead competition, placed second with five tops and six zones, ahead of Great Britain’s Erin McNeice (17). McNeice used more attempts to reach the same score as Copar, therefore settling in third place in the opening round.

In second place behind McArthur was France’s Paul Jenft (18), who also achieved his second medal of the week after taking bronze in Boulder. Jenft topped the Lead route though placed second due to a lower rank than McArthur in the previous round. Completing the podium line-up was Japan’s Rei Kawamata (18), who also stood on the men’s Junior Boulder podium, in second position. Kawamata reached 35+ in the Lead final, putting himself in third place and taking the bronze medal. 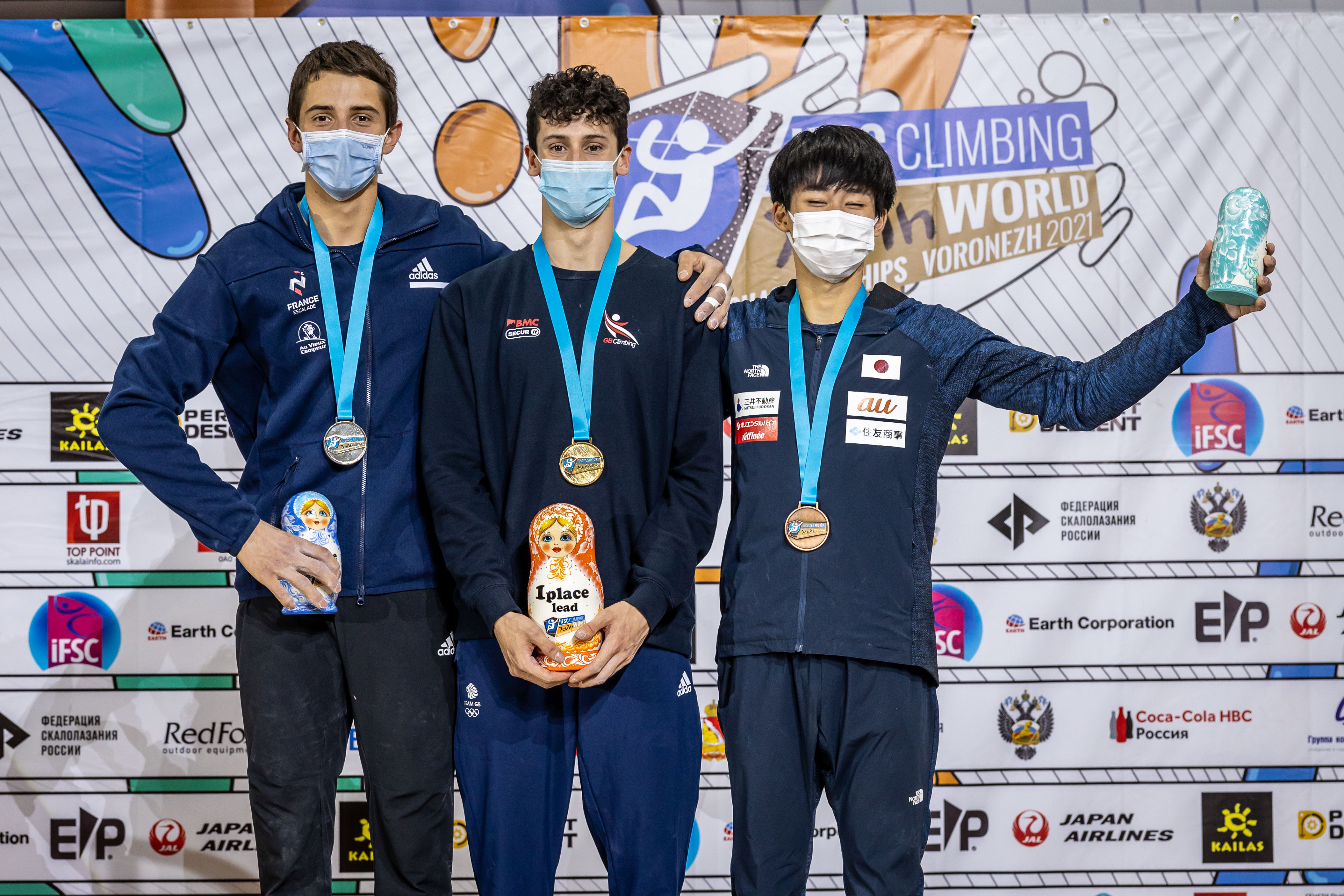 Following the men’s Junior Lead awarding ceremony, a further ceremony was held to award combined medals for Junior athletes who participated in all three disciplines – Lead, Speed, and Boulder – this week. Austria’s Lawrence Bogeschdorfer (18) received the gold medal, having obtained 10 points in total after multiplying his score of each discipline. McArthur placed second with a combined ranking of 13 points, and Bogeschdorfer’s teammate Johannes Hofherr (19) took third place with 54 points. A combined medal marks the second podium position of the week for Bogeschdorfer, after coming third in the men’s Junior Speed competition on Saturday, and the third of the week for McArthur. 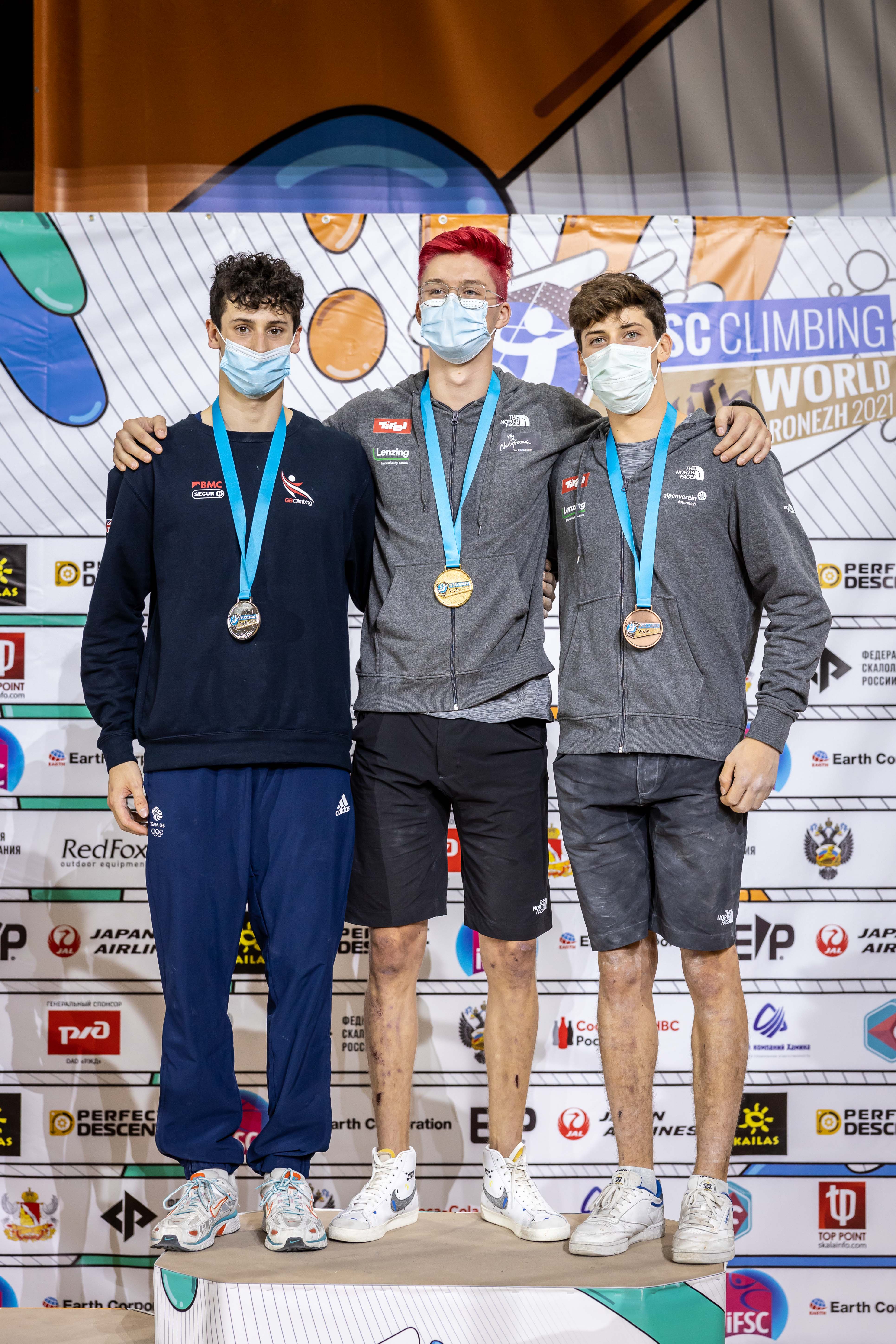 Tomorrow will see Junior and Youth A women compete in Boulder semi-finals, and finals will be held in Lead for Youth A men and Boulder for Youth B men and women. All semi-finals and finals can be watched live on the IFSC YouTube channel.

Full results from the men’s Youth A Lead semi-final can be viewed here.

Full results from the women’s Junior Boulder qualification can be viewed here.

Full results from the women’s Youth A boulder qualification can be viewed here.

Full results from the men’s Junior Lead final can be viewed here.