In the women’s Youth A Lead final, Slovenia’s Sara Copar (16) placed first with a score of 46+. This is the second gold medal that the Slovenian has earned at an IFSC Youth World Championships, after taking the combined win in the 2019 edition of the competition in Arco, Italy. Copar’s medal collection also boasts six IFSC European youth competition victories between 2019 and 2021. Italy’s Alessia Mabboni (16) climbed to 40+ and thus, won the silver medal ahead of Slovenia’s Liza Novak (16), who placed third. Novak matched Mabboni’s 40+, but took the bronze medal due to her lower ranking in the semi-final round. Bulgaria’s Aleksandra Totkova (16), who won two medals at the 2019 championships and earned a bronze medal at the IFSC Lead World Cup in Chamonix, France, earlier this year, missed out on the podium by one place, finishing fourth. 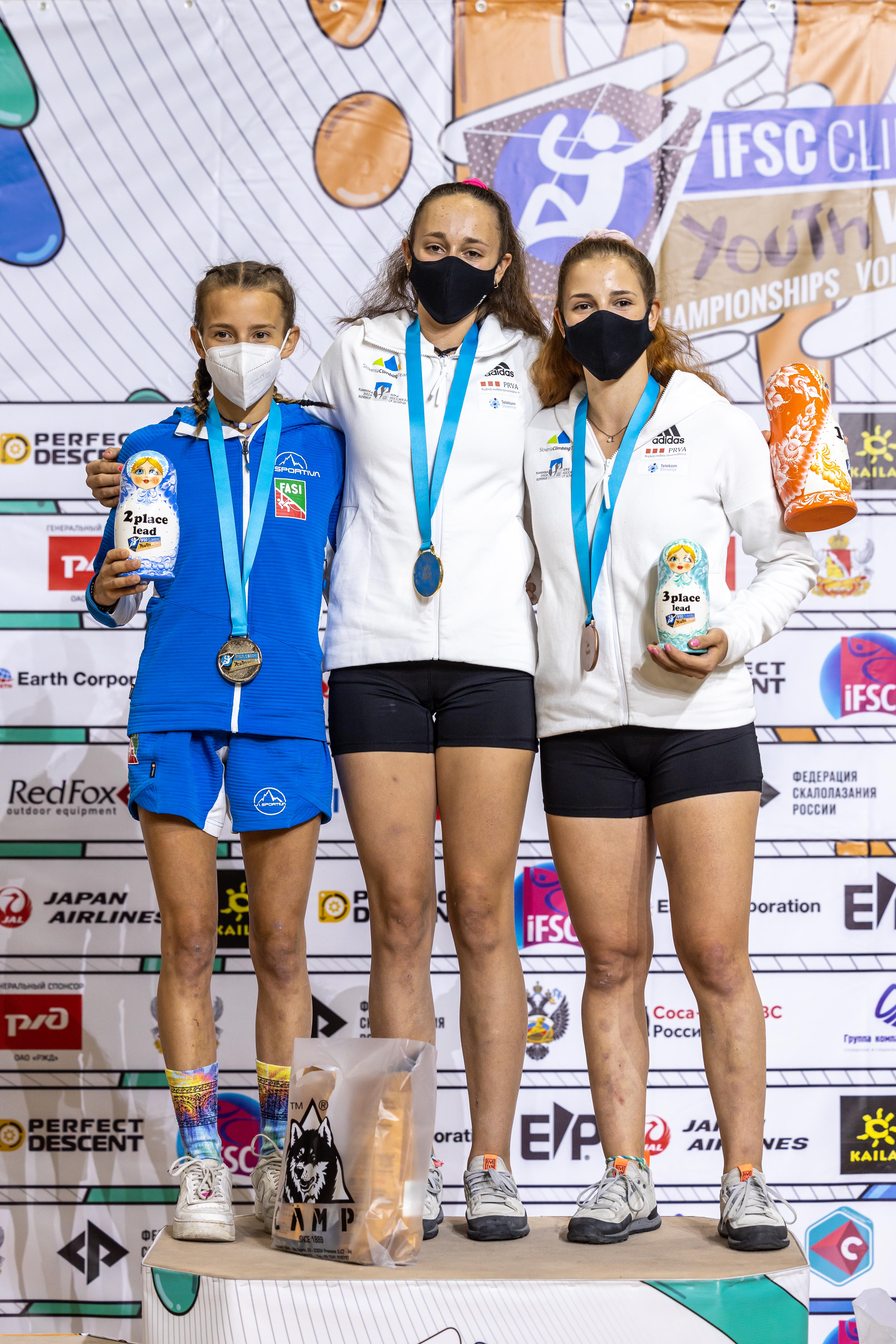 Japan’s Nonoha Kume (17) achieved first place in the women’s Junior Lead final, taking the gold medal in her first ever international Sport Climbing competition. Second place medallist Lucija Tarkus (17) of Slovenia matched Kume’s score of 48+, yet won the silver medal as a result of a lower ranking in the previous round. In third place was France’s Camille Pouget (18), who climbed to 46+. Tarkus has climbed atop the podium of a European youth competition a total of twelve times, with today marking her first international podium ceremony. Pouget has also been extremely successful on the IFSC European youth circuit, with 11 medals to her name excluding today’s bronze. 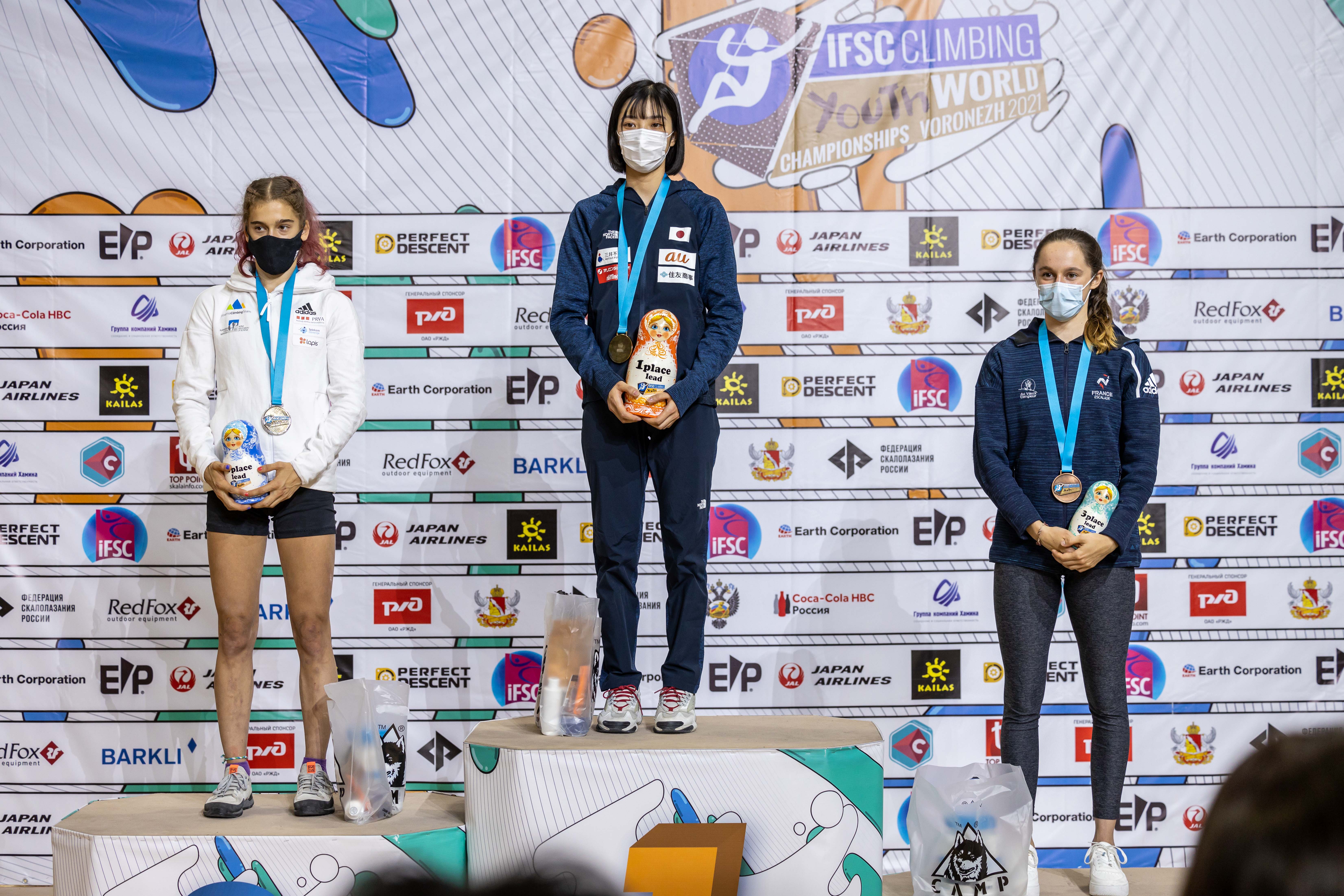 Fresh from the top of the Youth B men’s Lead podium yesterday, Japan’s Sorato Anraku (14) came out on top in the Youth B men’s Boulder qualification round. The 14-year-old was the only athlete to secure a finish on all six boulders, and will therefore head into tomorrow’s semi-final in first place. Nikolay Rusev (15) of Bulgaria, the Czech Republic’s Lukas Mokrolusky (13), and Gorazd Jurekovič (14) of Slovenia, each achieved five tops and six zones, bagging their spots in the semi-final in second, third, and fourth place, respectively.

In the women’s Youth B Boulder qualification, the USA’s Anastasia Sanders (14) ranked first with six tops – the only athlete to achieve such a score. Similarly to Anraku in the men’s Youth B event, Sanders achieved her first place Boulder qualification ranking having just taken the win in Lead. France’s Meije Lerondel (14) placed third with five tops and six zones, and Japan’s Mio Nukui (15) ranked third with four tops and six zones.

The final event of the day was the Junior men’s Lead qualification round, where senior IFSC World Cup regular Paul Jenft (18), of France, placed himself at the top of the leaderboard. With a score of 35+ on both qualification routes, Jenft earned himself a place in tomorrow’s semi-final. Great Britain’s Hamish McArthur (19), who won gold in the Junior men’s Boulder competition yesterday, placed second, and Switzerland’s Jonas Utelli (17) ranked third.

The competition continues tomorrow with the Youth A men’s Lead qualification, Youth B men’s and women’s Boulder semi-finals, and the Junior men’s Lead semi-final.

Full results from the Youth A women’s Lead final can be found here.

Full results from the Junior women’s Lead final can be found here.

Full results from the Youth B men’s Boulder qualification can be found here.

Full results from the Youth B women’s Boulder qualification can be found here.

Full results from the Junior men’s Lead qualification can be found here.