Day four of the International Federation of Sport Climbing (IFSC) Youth World Championships saw the first Boulder and Lead medals of the competition awarded, with Belgium, Great Britain, Japan, and the USA climbing atop the podium.

In the Youth B women’s Lead final, 14-year-old Anastasia Sanders of the USA achieved the fourth top of her 2021 Youth World Championships campaign, securing a gold medal and setting her name as one to remember as her Sport Climbing career continues. Putting on a stellar debut international competition performance, Sanders is the only Youth B athlete to have topped every single Lead route of this year’s championships. Finishing behind Sanders in second place was France’s Meije Lerondel (14) with a score of 49+, and completing the podium line-up was Mio Nukui (15) of Japan. 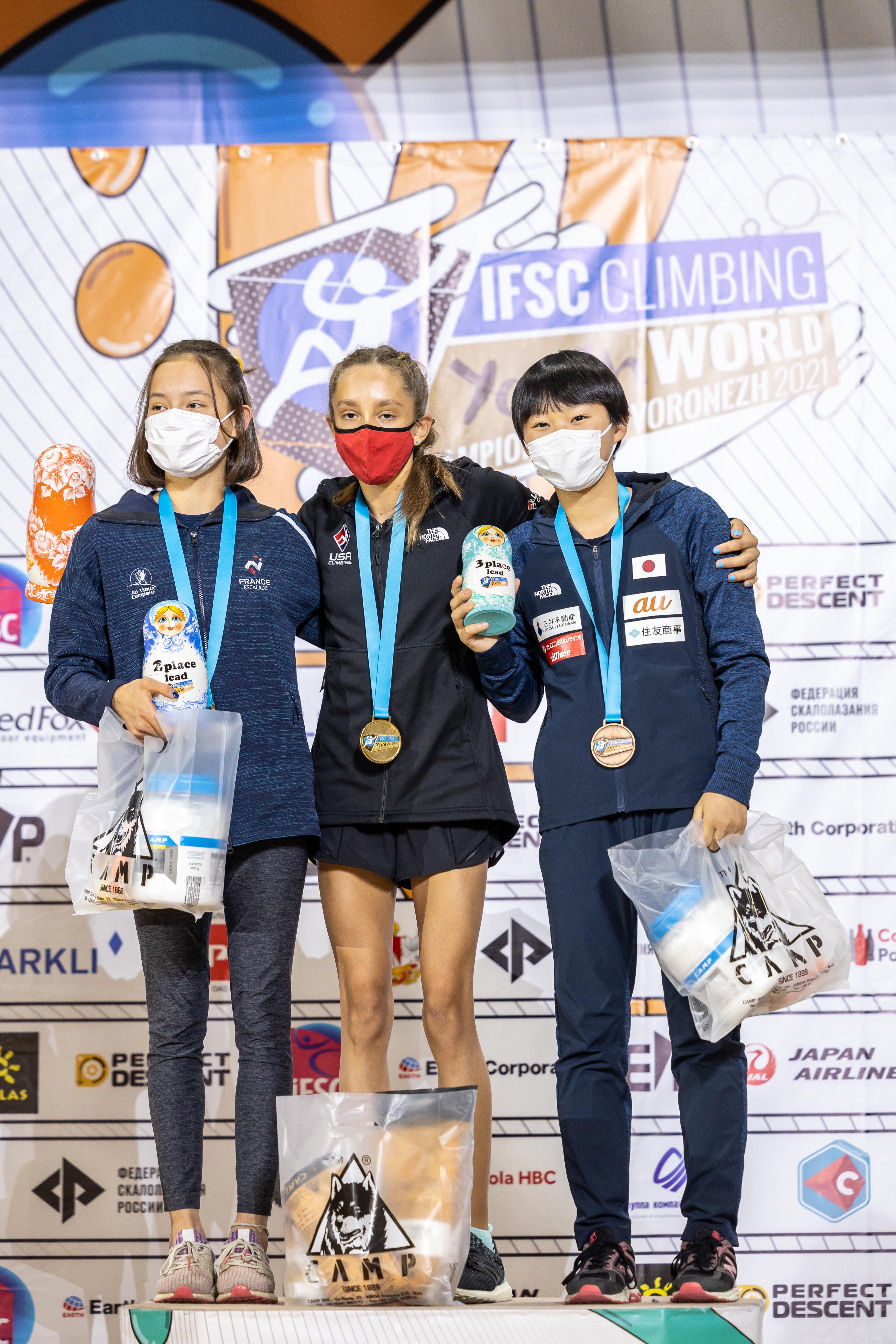 Japan’s Sorato Anraku (14) placed first in the Youth B men’s Lead final after climbing to a height of 40+. The 14-year-old therefore walks away from his debut international Sport Climbing competition with a gold medal. Team USA snatched both second and third place in the final, with Hugo Hoyer (14) and Dillon Countryman (15) taking silver and bronze medals, respectively, in what was also their first ever international competition.

Next up was the Youth A men’s Boulder final, where Belgium’s Hannes Van Duysen (16) took the win with three tops and four zones. Van Duysen has climbed his way on to a European youth Sport Climbing podium a total of five times, and today marks the Belgian’s first international youth podium. Germany’s Emil Zimmermann (17) and Thorben Perry Bloem (16) also secured three tops and four zones, achieving second and third place due to a higher number of attempts than Van Duysen. 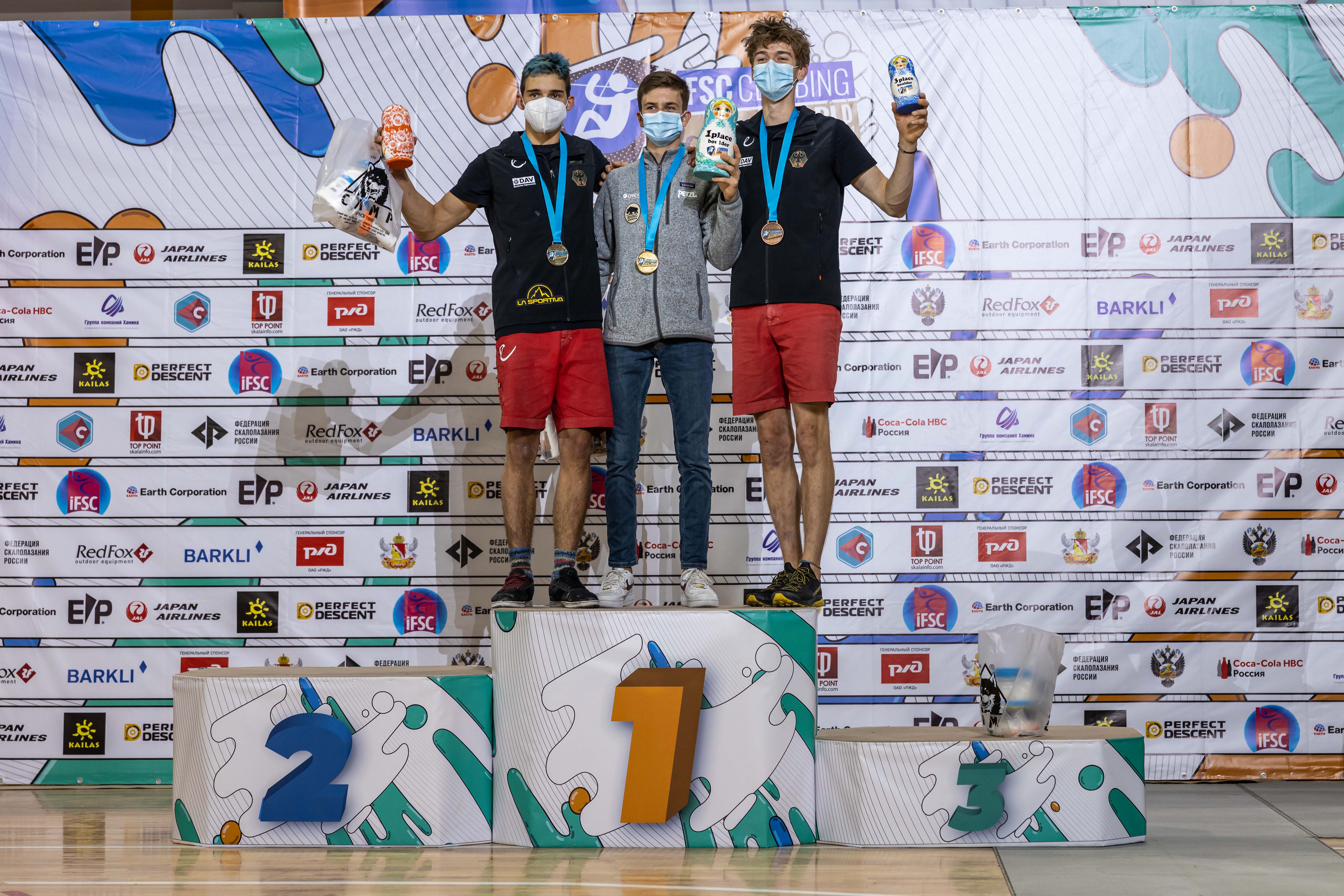 The Youth A women’s Lead semi-final followed, with Italy’s Alessia Mabboni (16) and Slovenia’s Sara Copar (16) sharing the top spot on the scoreboard having each obtained a top. Aleksandra Totkova (16) ranked third in the penultimate Lead round with a score of 39+, and USA Speed specialist Callie Close (16) also earned a spot in the final with 34+.

The full line-up for the Youth A women’s Lead final tomorrow is as follows:

In the Junior women’s Lead semi-final, Japan’s Nonoha Kume (17) placed first with a top, heading into tomorrow’s final alongside the Czech Republic’s Michaela Smetanova (18) and Russia’s Daria Mezentseva (17), who also achieved tops in the semi-final.

The full athlete roster for the Junior women’s Lead final is as follows:

The final gold medal of the day was awarded to Great Britain’s Hamish McArthur (19), who was the only athlete to top all four boulders in the Junior men’s Boulder final. After taking a silver medal at the 2019 IFSC Youth World Championships, McArthur upped his ranking to first place in 2021, finishing ahead of Japan’s Rei Kawamata (18) and Paul Jenft (18) of France, who placed second and third, respectively. With strong performances in past IFSC Youth World Championships and also Asian Youth Championships, this marks Kawamata’s twelfth podium finish. Jenft has made the podium 18 times across various European Youth competitions, though today is the first time that the French athlete has won an IFSC Youth World Championship medal. Japan’s Ao Yurikusa (18), who took the gold medal in 2019, just missed out on the podium, finishing the competition in fourth place. 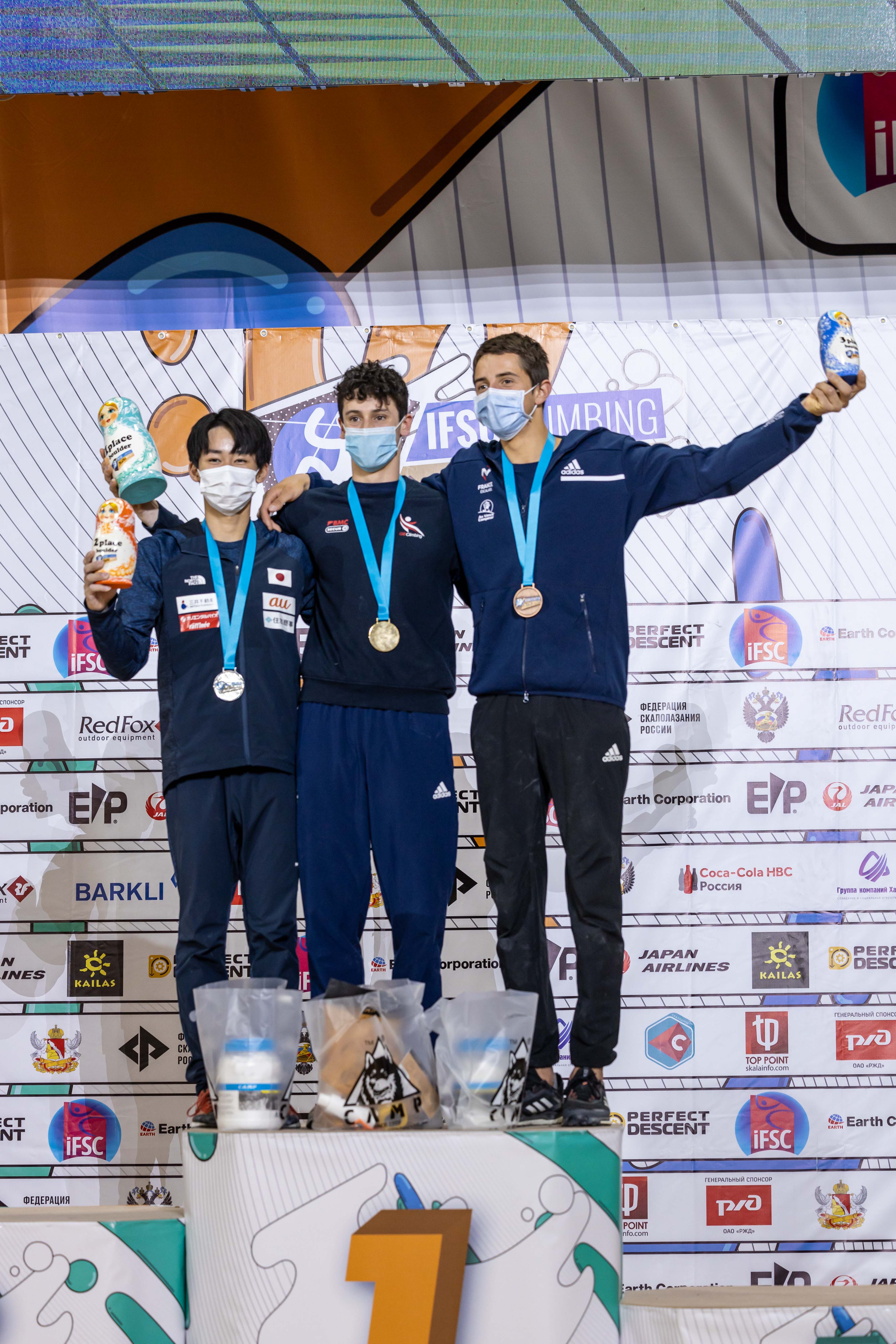 The championships continue tomorrow with Youth A and Junior women’s Lead finals, which will be streamed live on the IFSC YouTube channel from 10:00 AM (UTC+3:00). Youth B Boulder qualifications (men and women), and Junior men’s Lead qualifications, will also be held tomorrow.

Full results of the Youth B women’s Lead final can be viewed here.

Full results of the Youth B men’s Lead final can be viewed here.

Full results of the Youth A men’s Boulder final can be viewed here.

Full results of the Youth A women’s Lead semi-final can be viewed here.

Full results of the Junior women’s Lead semi-final can be viewed here.

Full results of the Junior men’s Boulder final can be viewed here.