Sport Climbing saw its second set of Olympic medals in history awarded today, following the women’s Combined final in Tokyo’s Aomi Urban Sports Park. The unstoppable Janja Garnbret (22) of Slovenia climbed into first position in two out of the three Combined disciplines, therefore placing herself firmly at the top of the podium with a gold Olympic medal. On home soil, Japan’s Miho Nonaka (24) and her teammate Akiyo Noguchi (32) walked away with silver and bronze medals, respectively.

“I'm so happy that I can't even describe it, it’s like a dream coming true. I wrote on Instagram probably six or more years ago, I wrote, ‘See you in Tokyo!’ so it's a dream come true,”  exclaimed Garnbret after taking the Olympic win.

Poland’s Aleksandra Miroslaw (27) kickstarted the women’s Combined final with a bang, rocketing up the Speed wall with a new world record time of 6.84 seconds. Besting Iuliia Kaplina (28) of the Russian Olympic Committee’s previous Speed world record of 6.96 seconds, Miroslaw also beat her own Speed Olympic record of 6.97 seconds, set earlier this week during the Tokyo 2020 women’s Combined qualification round. French Speed specialist Anouck Jaubert (27) took second place in the opening round of the night after being beaten by Miroslaw in the final race, with Nonaka of Japan placing third. 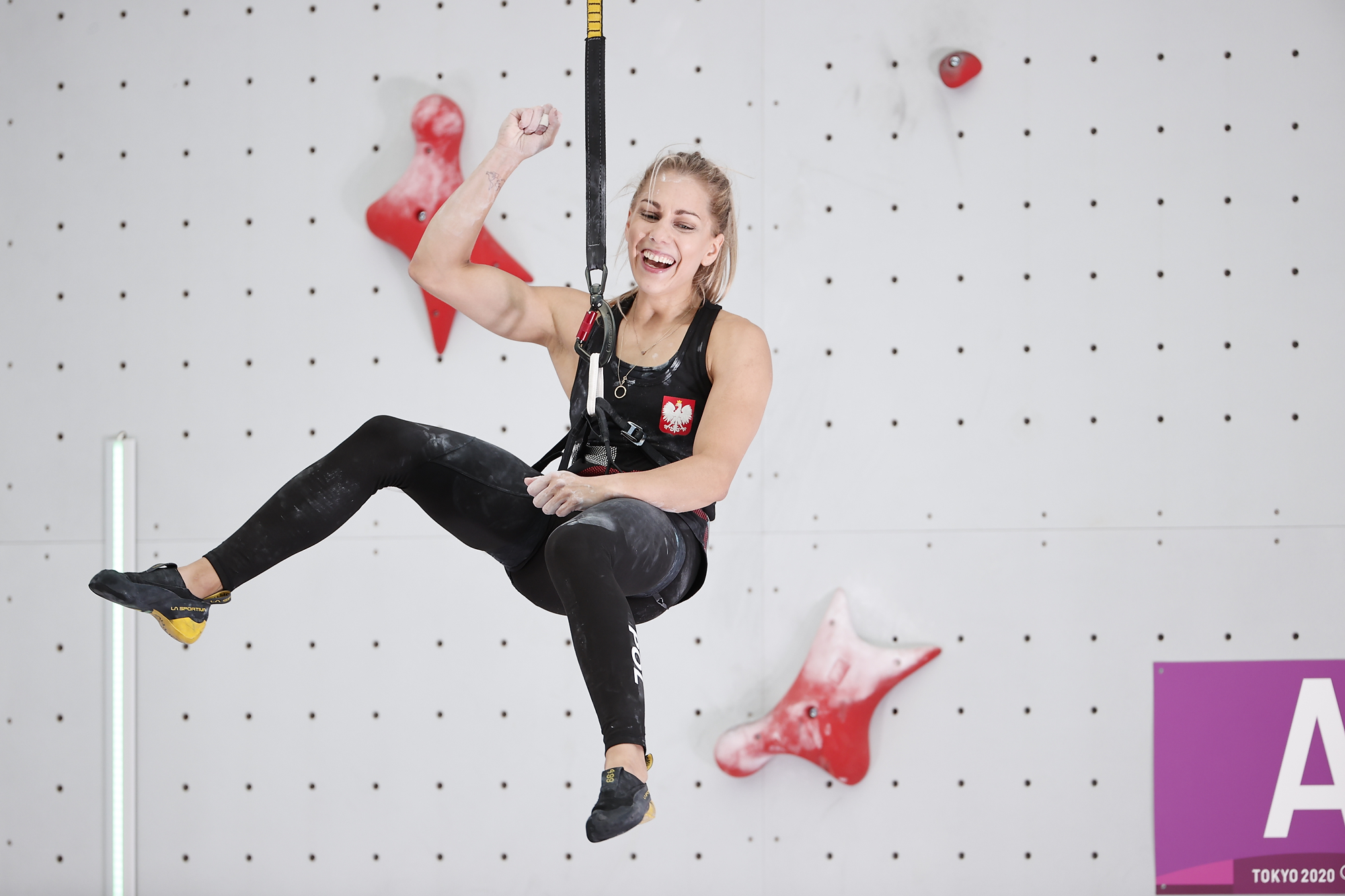 Poland's Aleksandra Miroslaw took the Olympic record as well as a world record in Speed at the Olympic Games Tokyo 2020
Photo: Dimitris Tosidis/IFSC

In addition to Miroslaw’s Speed Olympic and world record celebrations, Slovenia’s Janja Garnbret expressed her elation at breaking the eight second barrier for the first time with 7.81 seconds, and Chaehyun Seo (17) of South Korea was overjoyed to achieve her first time of sub-10-seconds, stopping the clock at 9.85.

Reigning Boulder, Lead, and Combined World Champion Garnbret annihilated the Boulder round, closing the second stage of the Combined competition as the only Olympian to secure a top. The Slovenian, who made history in 2019 as the first ever climber to sweep an entire season by winning every International Federation of Sport Climbing (IFSC) Boulder World Cup that year, topped two out of three boulders in this evening’s Olympic final. Bloc three – a strength-based boulder on a 35° overhanging wall – failed to generate any tops, although Garnbret and the USA’s Brooke Raboutou (20) were able to reach the zone hold. Raboutou ended the round in second place with three zones, and Nonaka placed third with two zones.

Janja Garnbret of Slovenia was the only athlete to achieve a top in the Boulder round of the women's Combined final at the Olympic Games Tokyo 2020
Photo: Dimitris Tosidis/IFSC

In Lead – the concluding round of the women’s Combined final – Garnbret shook off the ‘pump’ from her forearms, allowing the Slovenian to reach a height of 37+. The youngest athlete in the running, Seo, bowed to the crowd comprising of teammates and authoritative figures, before climbing just short of Garnbret to 35+ and taking second place in the final round. Austria’s Jessica Pilz (24) fell at 34+, finishing in third.

Following the final climb of the night, the women’s Combined final culminated in a gold Olympic medal for Garnbret with a sensational score of 5.00 points, with Nonaka taking silver after securing 45.00, and a score of 64.00 putting Noguchi in third place for a bronze medal. Miroslaw closed in fourth with 64.00 – ranked lower than Noguchi due to the Japanese climber performing better in Boulder and Lead – Raboutou in fifth with 84.00, Jaubert sixth with 84.00, Pilz in seventh with 90.00, and Seo in eighth with 112.00.

“It’s unbelievable to have the medal in my hands, I believed I could win the silver soon, but I still can’t believe I did. It's wonderful,”  Nonaka said after winning a silver medal at the Games.

A bronze Olympic medal marks the end of Akiyo Noguchi’s career as a competitive Sport Climbing athlete. The Japanese climber holds a total of 75 IFSC World Cup and World Championship medals to her name, having begun competing internationally back in 2005. As one of the most-decorated climbers on the World Cup circuit, third place at the Olympic Games Tokyo 2020 is a fitting finale to the Olympian’s career.

“I only felt that I would do my best, but I didn't do as well as I wanted. After the bouldering discipline I was worried whether I would get a medal or not. But with NONAKA Miho winning silver, I got the bronze. I feel I'm very worthy of the bronze medal,”  said Noguchi following her bronze medal performance. 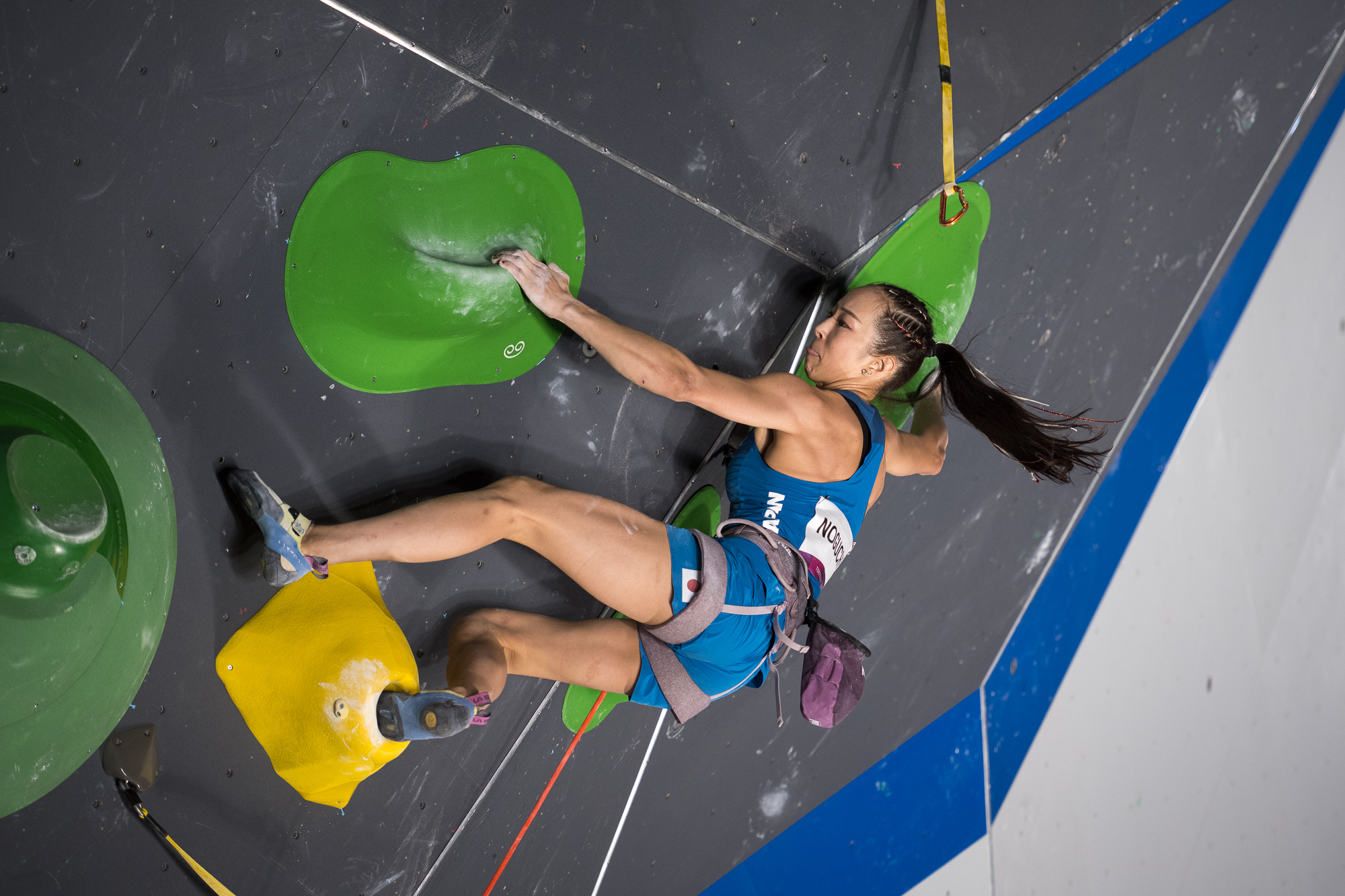 Full results of the women’s Combined final in Sport Climbing are as follows: