The fast-paced IFSC Lead World Cup 2019 season completed half of the planned events in under one month before taking a break, leaving fans hanging to see how the season would end and who would find a spot on the final podium. The last three events came at an equally fast pace and culminated with two new climbers claiming season titles.

The star of the IFSC Lead World Cup 2019 season was newcomer, Chaehyun SEO (KOR) who participated in her first World Cup competition in Villars, Switzerland, and before that was nearly unknown.

Before Villars, the world was watching Slovenian Janja GARNBRET (SLO), who won each of the IFSC Bouldering World Cup 2019 competitions, to see if she could sweep the Lead season as well, or at least defend her World Cup 2018 season win.

As the only climber to pass the crux in Villars and find herself at the top of the podium for the seventh time this year, GARNBRET was off to a great start on the Lead wall. However, one week later,it was SEO who stormed the podium in Chamonix to seize the gold, with no GARNBRET in sight.

SEO continued to find herself on the top step of the podium for the next three events, successfully securing the Lead Season Champion title.

The remaining two positions were determined at the final World Cup in Inzai, Japan, with GARNBRET finishing in second and Natsuki TANII (JPN) taking third.

Halfway through the men’s Lead World Cup season, three different climbers had stood on the winner’s step on the podium with no clear indication of who would claim the season title at the end of October. With both a bronze and silver medal from Villars and Chamonix respectively, it was Alexander MEGOS (GER) who resided at the forefront of the rankings due to his consistent results.

However, after the World Championship in Hachioji, MEGOS did not continue to pursue any World Cup gold medals and the season was left up for grabs. It was Adam ONDRA (CZE) who finally solidified his claim on the first-place position in the rankings with back-to-back wins in Kranj and Xiamen, but like the women’s podium, second and third place still needed to be filled.

After a breakthrough season in both the youth and senior divisions, Alberto GINÉS LÓPEZ of Spain was poised to take the silver medal for the season and he did it with style. During the semi-finals in Inzai, GINÉS LÓPEZ was the only climber of the morning to find a top, which he followed with a score of 36+ and a second-place finish.

Canadian Sean MCCOLL took home the bronze medal for the season, despite almost not advancing to the semi-finals in Inzaidue to a low fall on one of the qualification routes.  With a consistent appearance in finals throughout the season, he was able to finish out the year on a high note.

The complete rankings for the IFSC Lead World Cup 2019 season can be found here. 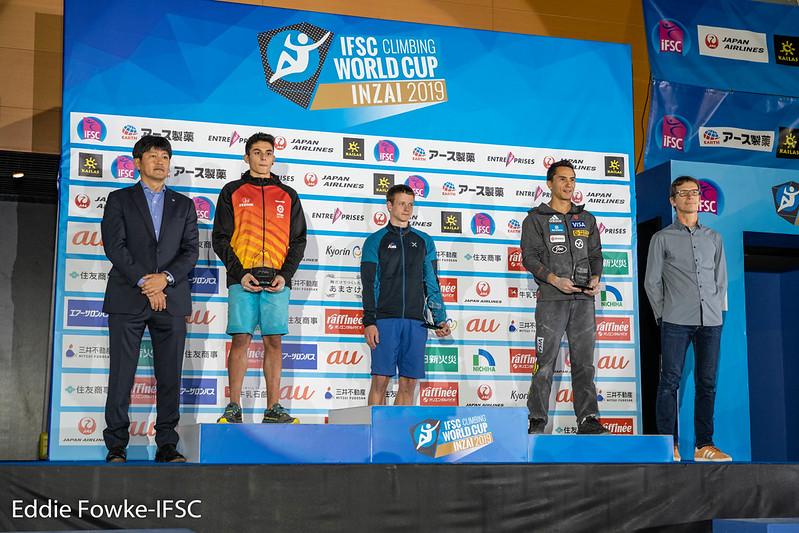