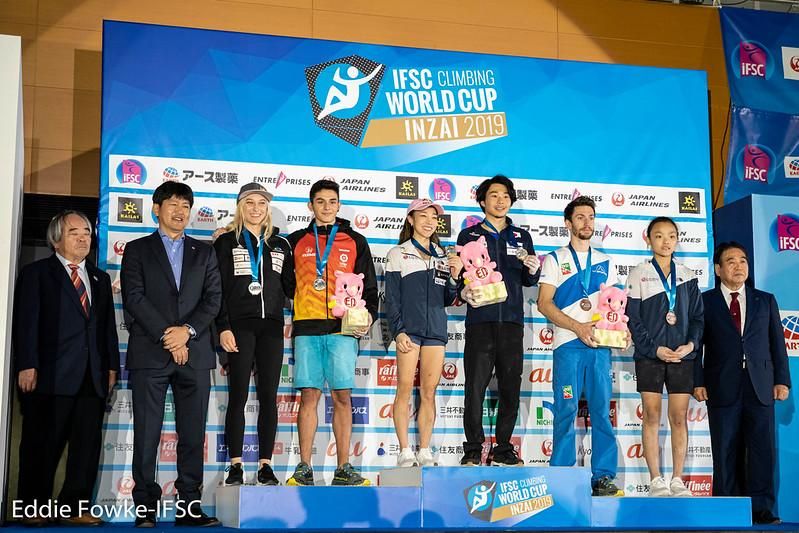 A Record Number of Wins

Four Japanese athletes advanced to the women’s finals to the excitement of the home crowd, who hoped to see one of their own on the final podium of the year.

Natsuki TANII (JPN) was the first to attempt the route and finished with a score of 34+, her compatriot Miho NONAKA followed immediately after to receive the same result. Both ended the season fifth and sixth respectively. Veteran climber, Akiyo NOGUCHI (JPN) was the first to successfully pass the highpoint set by her teammates and ultimately placed fourth in the competition.

After NOGUCHI, only three climbers remained to take their turn on the wall. The 2019 Lead Season Champion Chaehyun SEO (KOR) easily secured her spot on the podium by reaching hold 37, but the color of her medal had yet to be determined. Her run was immediately followed by the legendary Jain KIM (KOR), who took her time up the route, completing it with less than a minute left on the clock.

With a top from KIM, Janja GARNBRET needed a top of her own to stand on the highest step on the podium. She sped up the route in her usual style and approached the penultimate hold, but unfortunately appeared to pump out and slipped, settling for second place. With this win, KIM is the first climber to achieve 30 IFSC World Cup gold medals.

At the conclusion of the IFSC World Cup in Inzai, GARNBRET and TANII clinch the two available spots on the season podium.

There was another tie this week in the men’s competition between American Jesse GRUPPER and Japan’s Meichi NARASAKI that culminated in nine athletes participating in the final round. Both had their turns on the wall early on and GRUPPER set an early highpoint that was later matched by Yuki HADA (JPN). It wasn’t passed until Stefano GHISOLFI (ITA) had his chance to take on the lead wall and finished with a 32+, which eventually earned him a bronze medal.

The fifth climber out for the event was IFSC Lead World Cup Briançon 2019 silver medalist, Hiroto SHIMIZU (JPN). He calmly climbed up the wall at a steady pace and was the closest to reaching the top before falling at 38+, with four climbers remaining in the line-up.

Breakout climber, Alberto GINÉS LÓPEZ (ESP) has had incredible results this season in both the youth and senior circuits. As the only climber to top a route during the semi-final round, he was the clear favorite to win the gold in Japan. Despite nearly slipping several times, he managed to pass the previously set highpoints and approached SHIMIZU’s last hold, but fell before reaching it to land in second, granting SHIMIZU his first IFSC World Cup win in his home country.

With the Lead Season title already claimed by Adam ONDRA (CZE) in Xiamen, the last two spots on the podium still needed to be determined. After their performance in Inzai, GINÉS LÓPEZ took second and Canadian Sean MCCOLL took third.

Following seven months of Boulder, Speed and Lead competitions, GARNBRET and Tomoa NARASAKI (JPN) are once again ahead of the pack in Combined after their Combined World Championship wins in Hachioji this past August. To qualify for a combined ranking place, athletes had to participate in at least two competitions per discipline throughout the 2019 season. With these wins, both athletes are proving to be the ones to beat next year in Tokyo 2020.

With the end of the World Cup 2019 series, all eyes turn to the approaching Olympic Qualifying Event in Toulouse, France from November 28 to December 1. More information about the event can be found on the official event page.

Complete results for the IFSC Lead World Cup Inzai 2019 can be found on the official event page.

Complete rankings for both Lead and Combined can be found here.