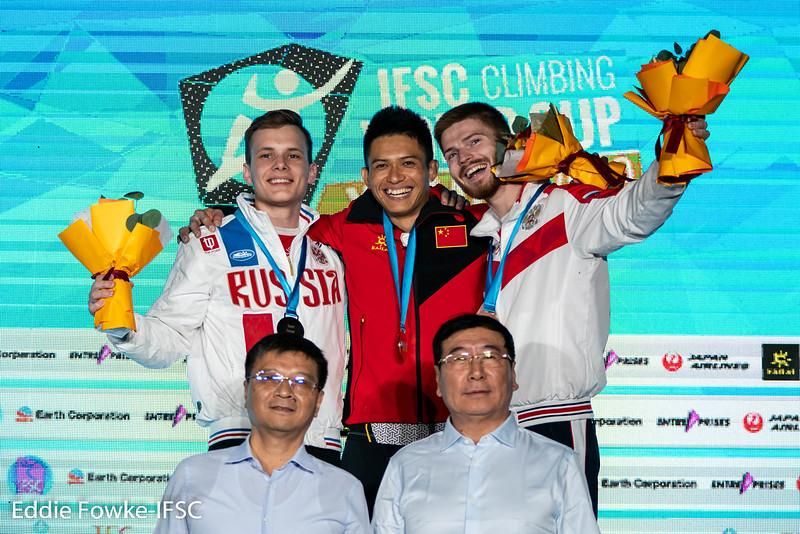 Gold for China and a New World Record

The last Speed Climbing competition of 2019 went out with a bang, complete with freshly crowned season champions and a new world record.

Going into the men’s final, 14 of the 16 climbers had recorded times under 6 seconds with QiXin ZHONG of China coming within one-hundredth of a second of equaling the men’s world record set by Reza ALIPOURSHENAZANDIFAR (IRI). ZHONG was also the first climber out on the wall against Pierre REBREYEND (FRA) where he easily advanced to the next round. He kept up the momentum and fast times to knock Bassa MAWEM (FRA) out of the competition in the round of eight before ultimately coming out on top in the big final versus Lev RUDATSKIY (RUS) to take home his first gold of the season on home soil.

After MAWEM’s early exit, Russia’s Vladislav DEULIN had a chance of taking over the first-place position on the overall podium, but with a bronze medal at today’s event it wasn’t enough and he had to settle with second place for the year. This is the second year in a row that MAWEM has clinched the overall Speed title. Despite also dropping out of the competition early, Alfian MUHAMMAD (INA) placed third for the season.

The women also clocked in incredibly fast times in Xiamen as they raced for the final World Cup 2019 gold medal and a chance to stand on the overall podium. Crowd favorite, YiLing SONG (CHN) didn’t have a clean start to the competition with a big stumble in the first race, after a miraculous recovery she managed to advance to the big final. Anouck JAUBERT (FRA) needed to put on a strong performance to have a chance of overcoming SONG’s claim at the top of the overall rankings but ultimately ended in fourth place in Xiamen after a big stumble in her race against Mariia KRASAVINA (RUS) in the small final. JAUBERT finished the season second in the overall rankings.

The big final for the women saw two powerhouses go head-to-head. Before the race began, both SONG and Aries SUSANTI RAHAYU (INA) toed the world record time set by SONG in Wujiang this past May, with SUSANTI RAHAYU claiming the faster time. In the final race of the night, both climbers exploded out of their starting positions but SONG quickly fell behind. Despite the clear victory, SUSANTI RAHAYU did not slow down and reached the top with a time of 6.99 seconds, setting a new world record and becoming the first woman in the history of the sport to record a time under 7 seconds.

SONG finished the competition in Xiamen in second place but took the overall Speed season title in front of her home crowd. With her stunning performance and win of the night, SUSANTI RAHAYU found the third-place spot on the overall podium.

The complete results for the IFSC Speed World Cup Xiamen 2019 can be found on the official event page.

The complete rankings for the IFSC Speed World Cup 2019 season can be found here. 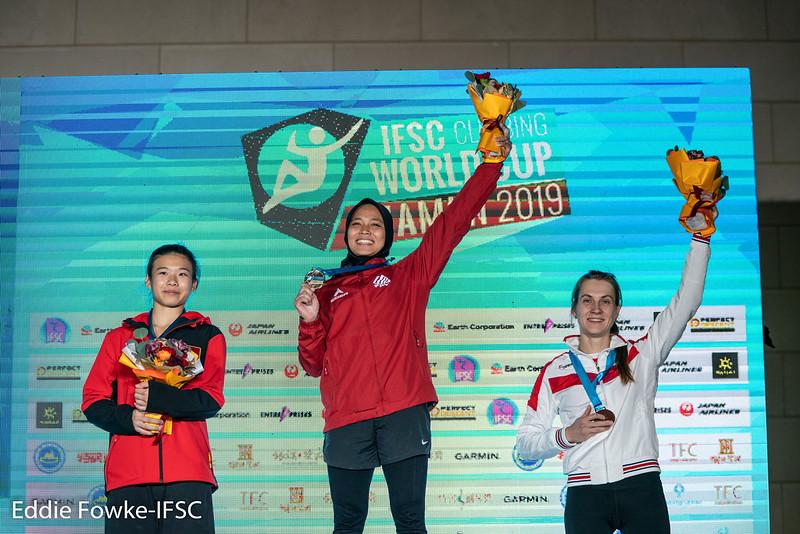