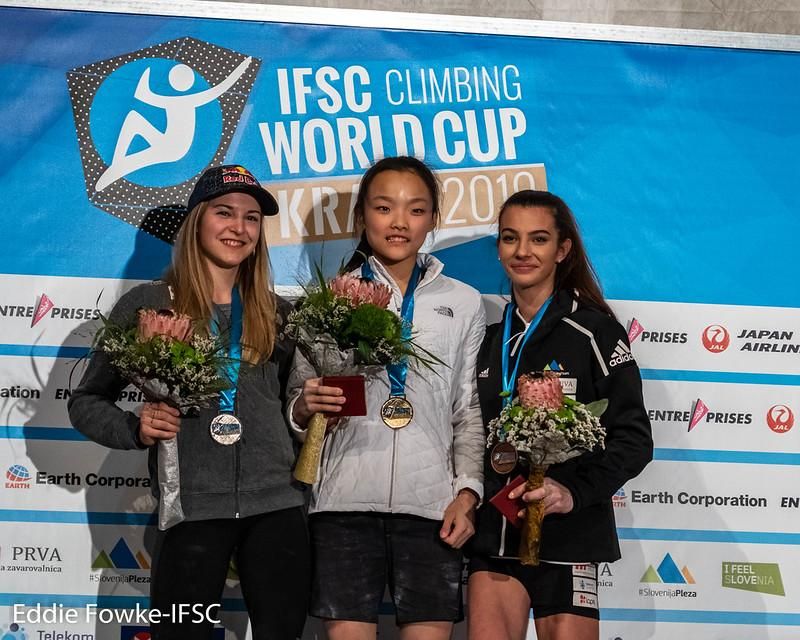 Many big names were missing going into the women’s final in Kranj. Last year’s winner, Jain KIM (KOR) put in an excellent performance during the semi-finals, but did not advance due to countback and finished the competition in ninth place. To the shock and disappointment of the local crowd, recently crowned IFSC Lead World Champion Janja GARNBRET (SLO) fell low on the semi-final wall, missing out on finals for the second time this season.

With GARNBRET gone, the spot on the first-place podium was wide open, but the wall wouldn’t let the gold medal be taken so easily. In a fairly even split, the competitors either fell low on the wall around hold 20 or they managed to reach hold 34 before tiring out. It was the rising star of the Lead World Cup 2019 circuit, Chaehyun SEO (KOR) who narrowly squeaked out ahead of the competition to clinch her third gold medal of her debut season and definitively separate herself from her competitors in the overall rankings. Jessica PILZ (AUT) finished just behind SEO, with Lucka RACOVEC of Slovenia taking home the bronze in front of a delighted local crowd.

The route for the men had a wider range of results that included low falls and one successful top. Canada’s Sean McCOLL climbed at a steady pace up the wall and set an early highpoint that was quickly surpassed by Alberto GINÉS LÓPEZ (ESP), however, the next few climbers out were unable to reach the same height, with two falling at hold 12. Last year’s gold medalist in Kranj, Stefano GHISOLF (ITA) was looking to win back-to-back gold medals in this event, but sadly had to settle with sixth place.

After an unfortunate end in the Combined final in Hachioji, Japan following his IFSC Lead World Championship win, Adam ONDRA (CZE) was determined to make his performance in Kranj end differently. He smoothly made his way up the wall and past the previously set highpoint to achieve the only top of the day to the roaring cheers of the crowd. Japan’s Kai HARADA finished with a silver medal and GINÉS LÓPEZ earned another bronze medal following his third-place finish in the Youth A Lead World Championship in Arco last month.

For the complete results, replays and photos from the IFSC Lead World Cup Kranj 2019, visit the dedicated event page.

The IFSC World Cup 2019 is moving on to the final two competitions of the year. In just over one month, the climbers will come together again in Xiamen, China from October 18 to 20 for the final Speed World Cup of the year and the penultimate Lead World Cup. As the overall rankings get tight, a surprise win could move anyone ahead to as spot on the final podiums. Check out the current rankings here. 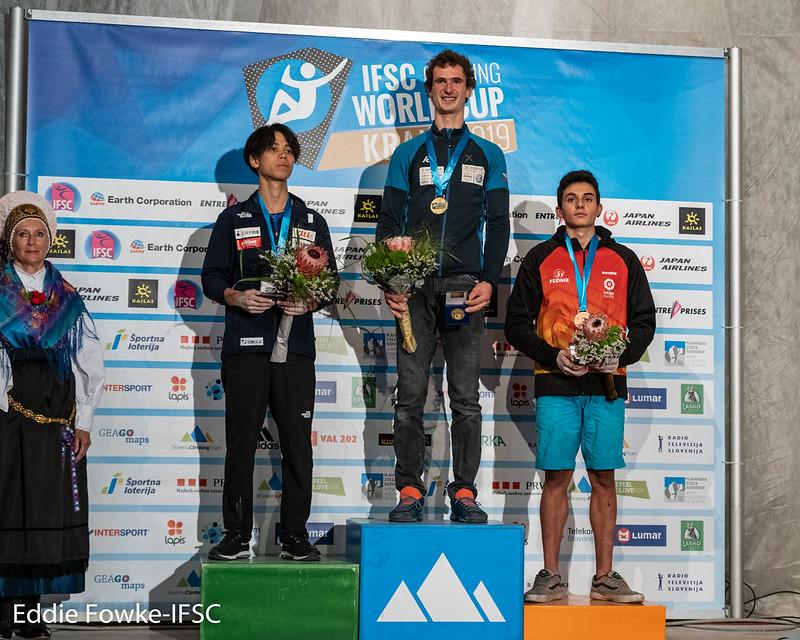