With the 2019 IFSC Youth World Championships well underway in Arco, Italy, the IFSC held a strategic planning workshop to inform its National Federations (NFs) of the IFSC’s plan moving forward, towards 2024 and beyond. A total of 35 attendees from 24 of the IFSC’s Member Federations joined the seminar in Arco, where IFSC Secretary General Debra Gawrych raised a series of topics concerning the future of the IFSC and Sport Climbing as a whole during an interactive discussion.

The workshop largely focused on the period between now and 2024, with the IFSC and its Member Federations working together in preparation to adapt Sport Climbing events to better handle the sport’s growth, particularly between the Olympic Games Tokyo 2020 and Paris 2024. Continuing this theme, proposals were next put forward to help athletes train to compete in the upcoming two editions of the Olympic Games, where Sport Climbing will make its first summer Olympic appearances as an additional sport. 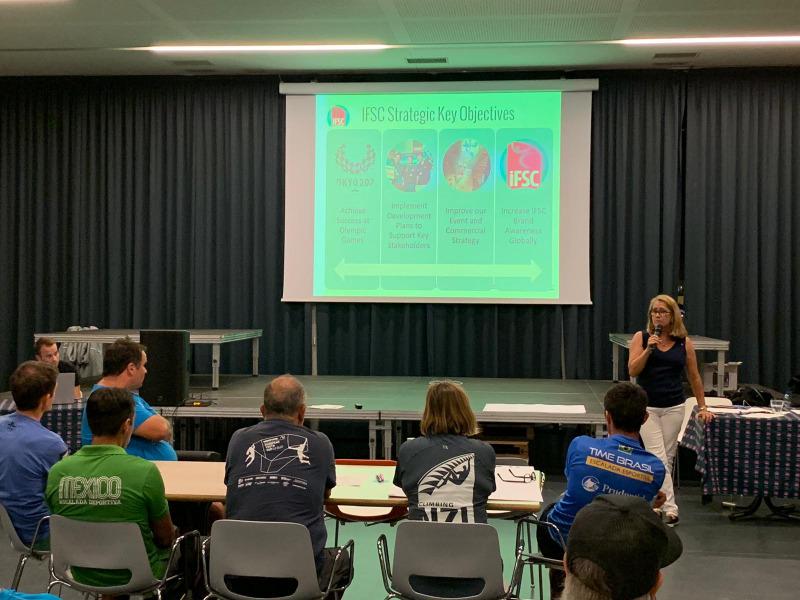 Ideas for improvement were also proposed, setting goals for the future direction of the IFSC and Sport Climbing and reviewing the ways in which the IFSC Executive Board establishes priorities for the years ahead. The workshop also considered how the IFSC works in general, taking into account decision making and possibilities of the IFSC’s Member Federations being further involved with this process. It was decided that an increased level of communication is required between the IFSC and its NFs, with the two currently only coming together once a year for the IFSC Plenary Assembly. Similarly, the IFSC expressed a need for better communication and cooperation between its Continental Councils, with active continental operations and representation.

Finally, the workshop outlined actions to assist the development of smaller NFs, including coaching, infrastructure and strategy.

“As we head towards the Olympic Games Tokyo 2020 and following that, Paris 2024, improving communication and better collaborating with our NFs is critical. We are all working towards the same goal, which is to develop our sport for the better and portray it in its best possible light to a whole new audience, at an Olympic level. Therefore, we must remember to keep working together, which is why the IFSC has organised a series of workshops throughout the 2019 season,” says IFSC Secretary General Debra Gawrych.