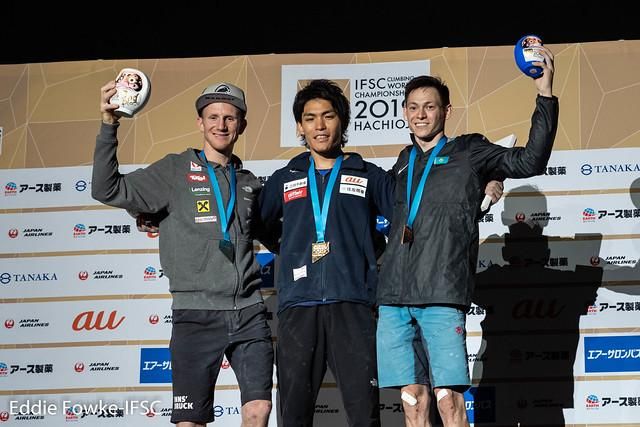 The excitement of the Olympic qualification shaped a thrilling competition with the athletes fighting to the last hold to get a ticket to the Tokyo 2020 Summer Olympic Games.

Among the various surprises, Adam ONDRA (CZE) didn’t manage to get to the finals due to an appeal on his Lead results.

Of the final eight climbers of the IFSC Climbing World Championships Hachioji 2019 to compete were four Japanese athletes who were determined to put on a solid performance and come away with a medal in front of their home country.

With run times consistently clocking in under 7 seconds, each climber had to work hard to advance to the next round, including speed climbing specialist Rishat KHAIBULLIN (KAZ). Compared to the races held during the Speed World Championship last week, the races in the Combined Finals remained clean and fast with no false starts and limited slips. The small final placed Mickael MAWEM (FRA) against Kai HARADA (JPN) with HARADA reaching the buzzer first. In the final race, KHAIBULLIN set a blazing speed of 5.915 seconds, leaving the first portion of the Combined Finals in first, while his opponent Tomoa NARASAKI (JPN) fell halfway up to end in second.

Three Tops for the Win

After finishing the speed round in eighth place, Germany’s Alexander MEGOS was the first out on the bouldering wall where quickly retreated after reaching the zone. With a sudden finger injury, MEGOS promptly withdrew from the competition, however, the result from his attempt was enough to put him in seventh place for the round.

Austria’s Jakob SCHUBERT set the bar high in the Lead event starting the competition with a top that the remaining climbers were ultimately unable to achieve and it was a crucial win to find a spot on the final podium. In a surprising turn of events, KHAIBULLIN managed to outclimb both MAWEM and Meichi NARASAKI who fell low on the route to end the Lead round in fifth. All eyes were on Tomoa NARASAKI as the last climber of the day to see if he could follow his incredible boulder performance with a top in Lead, but he fell at the headwall and had to settle with second.

A Win for the Home Team

With the combination of results from all three categories, Tomoa NARASAKI ended his World Championship 2019 appearance with another gold medal to the excitement of the home crowd. SCHUBERT finished in second to earn his second silver medal in Hachioji, while KHAIBULLIN landed in third to claim his first World Championship medal.

The complete results for the event can be found here.