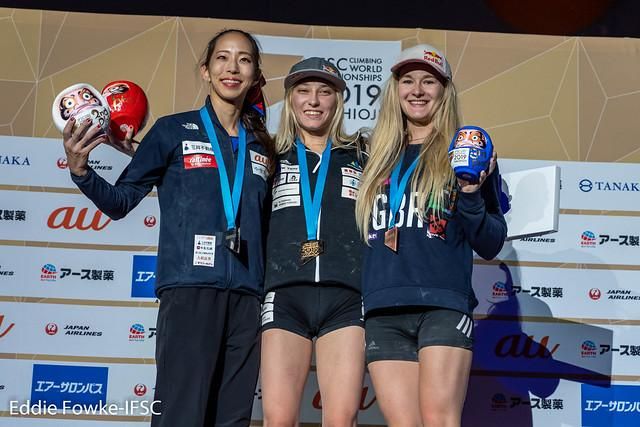 Another Record Broken By Garnbret

The second to last event of the IFSC Climbing World Championship Hachioji 2019 took place on August 20 with the Women’s Combined Finals. The intense battle for the final women’s gold of the World Championships followed an exhausting day of qualifications where the top 20 athletes from last week’s competitions were whittled down to eight.

Another Speed Win For MIROSLAW

The race between Aleksandra MIROSLAW (POL) and Ai MORI (JPN) kicked-off the speed portion of the Women’s Combined World Championships. Despite a slip halfway up the wall, MIROSLAW still managed to reach the buzzer first and kept up the momentum to finish big finals race against Shauna COXSEY (GBR) in first. The small final saw Petra KLINGLER (SUI) against Miho NONAKA (JPN), with KLINGLER outpacing NONAKA to land in third.

NOGUCHI Turns Up the Heat

The bouldering event introduced the new three route final instead of the traditional four routes. After coming in eighth in speed, MORI was the first climber to try her hand on the walls where she topped W1 after three attempts. Akiyo NOGUCHI (JPN) followed with a flash and continued to stay in the lead with a two-attempt top on the second route. While Janja GARNBRET (SLO) was unable to top W1, she made up for it with a flash on W2 to ultimately come in second. COXSEY earned the third-place spot with her W1 top. The last route of the competition proved to be too difficult for any of the athletes to complete with no one reaching the zone, let alone the top.

At the end of the night, the climbers faced a difficult lead wall with many of the athletes falling low on the route. MORI had a spectacular lead result as the only climber to top both the qualification and finals route. However, GARNBRET followed up with a top of her own to take first place in the round. After her bouldering win, NOGUCHI was close to catching GARNBRET’s overall lead and just needed to top the wall to take the gold, sadly she fell on the jump to the final hold, landing in third for the lead portion.

A Hat Trick for GARNBRET

With the combination of results from all three categories, GARNBRET successfully defended her 2018 Combined World Championship win and claimed her third gold medal in Hachioji. NOGUCHI finished second to earn a second silver medal, while COXSEY earned an additional bronze.