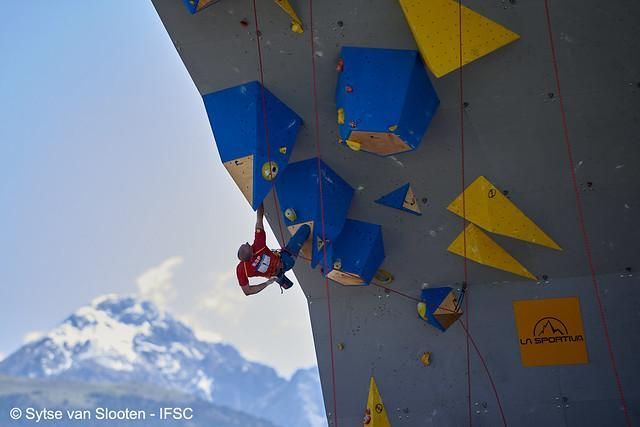 A Strong Start for the Paraclimbing World Championship

The first day of the Paraclimbing World Championship 2019 began with a long, hot morning of qualifications before concluding with some of the discipline’s top athletes battling to maintain their winning streaks or earn their first gold medal.

Gold for Japan and Romania

The first day of the World Championship introduced the men’s visual impairment categories, B2 and B3. Innsbruck bronze medalist, Fumiya HAMANOUE (JPN) was the first B2 climber on the wall and maintained a steady pace before running out of time shortly before reaching the headwall. American Justin SALAS was looking for a second consecutive world championship title, but after falling off the wall a couple of moves shy of the top, he had to settle with silver. It was Sho AITA (JPN) who ultimately reached the top hold, but not before running out of time and earning a result just below the coveted top. However, it was still enough to earn him a first-place finish.

The men’s B3 competition had some incredible finishing times with both Lux LOSEY SAIL (GBR) and Cosmin Florin CANDOI (ROU) reaching the final panel with more than three minutes left on the clock. CANDOI managed to secure the top in both the qualifications and final, taking the gold medal with a flawless performance.

The men’s AU-2 category saw some serious competition for reigning World Champion Matthew PHILLIPS (GBR), when Mor Michael SAPIR (ISR) reached the top of the route first after topping both qualification routes. However, PHILLIPS was able to out climb SAPIR to secure gold with blazing speed, finishing his attempt with more than half the time on the clock remaining.

The men’s RP3 route saw two flawless performances in both the qualifications and finals from local French favorites Romain PAGNOUX and Mathieu BESNARD. In the end, it was PAGNOUX who claimed the gold for his third World Championship title, while BESNARD took home silver.

The women’s event combined RP3 and AL-2, with French leg amputee Lucie JARRIGE climbing for her third World Championship win and she did it superbly as the only women’s climber to top the route. Team Japan came away with two medals of their own with Aika YOSHIDA and Momoko YOSHIDA both reaching the headwall.

The second day of the Paraclimbing World Championship takes place tomorrow, July 17, with Women B2, Men B1, Women AU-2, Men RP1 and both RP2. The live streaming will take place at 19:30 (GMT+2) on the IFSC website.