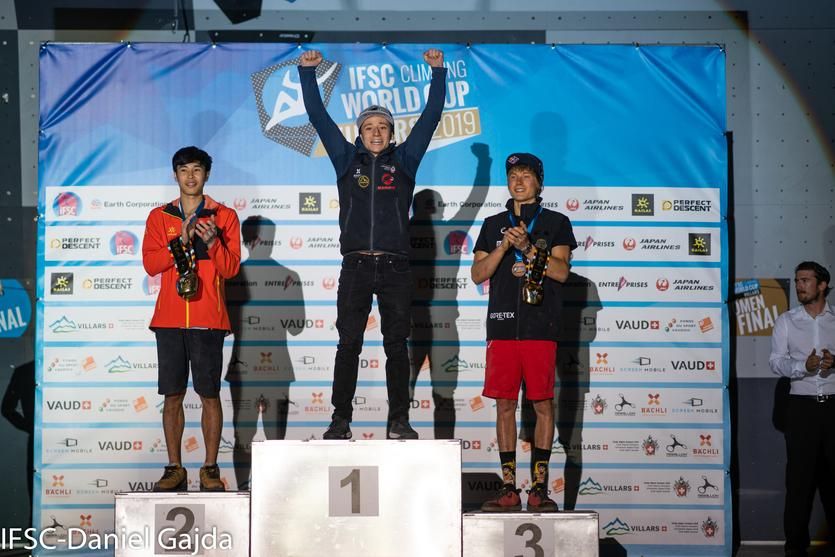 A Gold for Switzerland, Another Win for GARNBRET

The 2019 Lead season kicked-off with a spectacular competition in sunny Villars-Sur-Ollon in Switzerland. Despite the heat, the climbers pressed onward, determined to start the upcoming series of competitions on the right foot.

A Gold on Home Soil

The starting list for the men’s finals had the event bookended by the NARASAKI brothers of Team Japan, with Meichi NARASAKI up first and Tomoa NARASAKI last.

After the first four climbers smoothly climbed up the entirety of the route, with only two falls on the attempt on the last hold, it appeared as if each of the men’s competitors were going to reach the top of the wall. However, while going to clip in after clearing a difficult section, Yuki HADA’s (JPN) foot slipped and he was the first off the wall before nearing the end.

Local favorite, Sascha LEHMANN (SUI) followed HADA’s fall with an easy climb to the top, celebrating in style to the cheers of the Swiss crowd and takes a tentative first place on home soil with top climbers Domen SKOFIC (SLO) and Tomoa NARASAKI coming up after him.

In a shocking turn of events, neither of the final two competitors were able to secure the top hold. SKOFIC attempted to dyno the final move and slipped off, while the seemingly composed Tomoa NARASAKI fell with only a couple holds left to go.

Kokoro FUJII (JPN) who had narrowly missed out on the top was later bumped down to last place after a technical issue at the beginning of his climb.

As the only climbers to successfully top the route, LEHMANN, YuFei PAN (CHN) and Alexander MEGOS (GER) take the podium, respectively.

GARNBRET Starts of Lead with Gold

While the first two-thirds of the women’s route seemed easy enough with each of the athletes smoothly tackling the dynamic movements and large slopers, it was the crimp near the top that stopped them all in their tracks. As each climber made their attempt at the apparent crux of the route, the anticipation was growing among the crowd; who would be the first one to move past it?

Of course, it was Janja GARNBRET (SLO), winner of the 2019 Bouldering Season and the only women’s competitor to top the semi-final wall, without a chalk bag no less. But the excitement was short-lived as GARNBRET failed to stick the following hold.

The two others to take the podium alongside the Slovenian climber were SEO and Ai MORI (JPN).

For the complete event results, visit the event page on the IFSC website.

July is a busy month with competitors heading to the Chamonix in just a matter of days to compete in both speed and lead under the shadow of Mont Blanc from July 11 to 13. 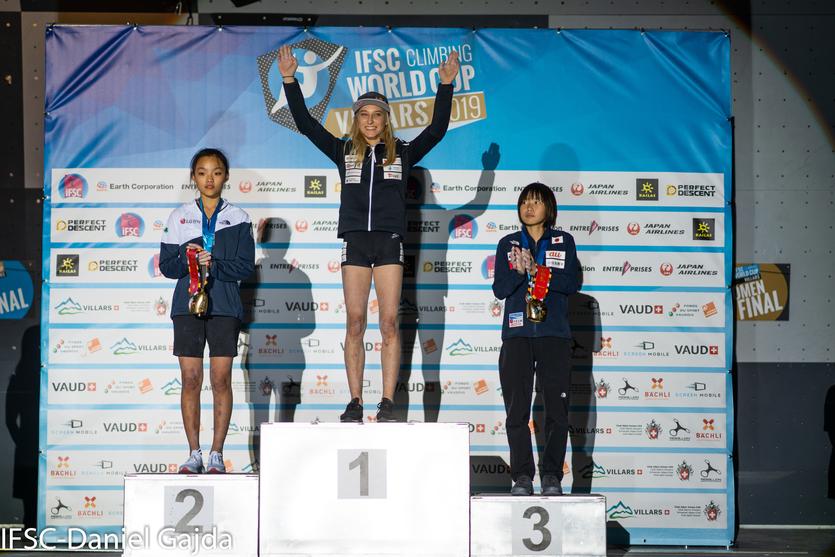