The Men’s 2019 Bouldering Season was a rollercoaster ride for both the competitors and the audience, with no competitor winning a World Cup more than once.

Adam ONDRA’s (CZE) return to bouldering world cups for the first time since 2015 was the central focus of fans, with whispers early on that he might be the one to claim the Overall 2019 Bouldering Season title. After seizing first place in Meiringen, as the only climber to top all four boulders, those speculations were looking good. Despite never climbing higher than second place in the next three events he competed in, and missing out on Chongqing due to illness, he was still sitting at the top of the rankings by Vail.

However, Tomoa NARASAKI (JPN) was having a similarly great season with a win in Wujiang and second place in Meiringen and Chongqing. He continued to bring the heat and consistently ranked second for the season.

Vail was the determining factor in who would come out on top in the men’s circuit. Third place in the overall was up for the taking with Aleksey RUBTSOV (RUS) missing out on competing after sustaining an injury the week before. All NARASAKI had to do to successfully seize the season title was beat ONDRA by two places in the World, but the odds were not in his favor.

All the competitors seemed to be in top form throughout qualifications and semi-finals, with four tops being necessary to earn a spot to the final round. Halfway through, both ONDRA and NARASAKI had two tops each, but it all changed after the third problem, when ONDRA failed to reach the zone, while NARASAKI topped it. Once ONDRA was unable to top the fourth wall, the final rankings were clear; NARASAKI had won the 2019 Bouldering season, leaving ONDRA with second.

After that, it was the third-place winner that still needed to be determined, and the answer came quickly. Yoshiyuki OGATA (JPN) flashed the final boulder, completing all four wall and winning his first IFSC Boulder World Cup. The first-place finish in Vail gave him enough points to jump the higher ranked competitors and land on the third-place spot on the overall season podium.

Find the Overall Ranking for the 2019 Bouldering Season here. 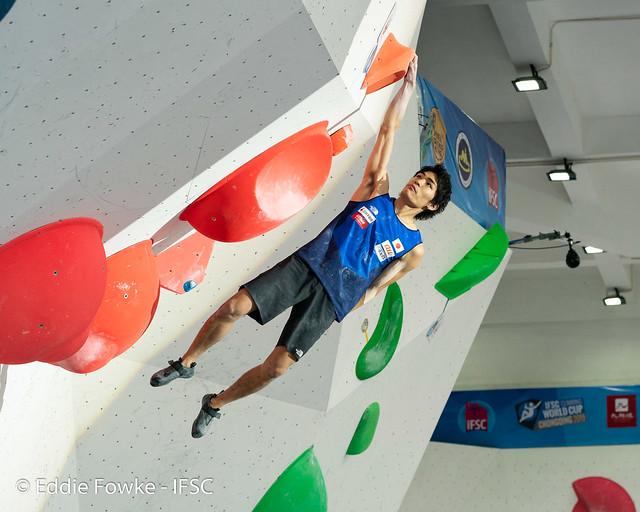