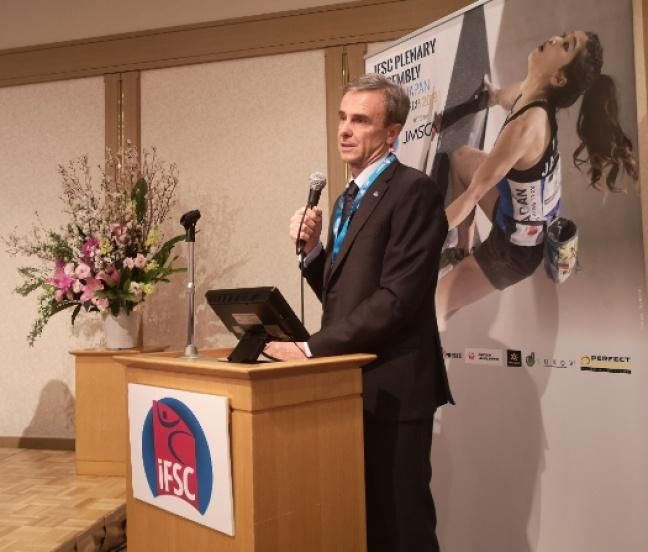 As is protocol, the IFSC plenary Assembly began with a confirmation of the attendees and approval of the 2018 session minutes. IFSC President Marco Scolaris then provided a report of the 2018 IFSC season and his vision for the future, highlighting the achievements of Sport Climbing at the Youth Olympic Games Buenos Aires 2018, the great moments of the past year and the strategic plan for 2020-2024 and beyond.

“2018 was an exciting year for our sport. As we continue our journey as an Olympic sport, we face increased exposure and responsibilities, so must climb higher to keep our heart and soul at the very centre of the sport. So far, so good,” opened President Scolaris.

Japan Mountaineering & Sport Climbing Association (JMSCA) President Mr Kuniaki Yagihara next welcomed the IFSC and its Member Federations to Tokyo, Japan, as host federation of the 2019 IFSC Plenary Assembly. President Yagihara confirmed the strong relationship between the IFSC and JMSCA, promising the JMSCA’s full support in making the PA and the 2019 World Championships in Hachioji, Japan, a success.

Koji Murofushi, 2004 Olympic gold medallist and Sports Director for the Tokyo Organising Committee of the Olympic and Paralympic Games (TOCOG), rounded-off the Plenary Assembly welcomes with a discussion around preparations for the Tokyo 2020 Urban Sports category, in which Sport Climbing is included.

The Plenary Assembly continued proceedings with a discussion of Governance, presenting the work of the Governance Working group in consultancy with the Ethics Commission and the ASOIF Governance Unit. The Member Federations were presented with and voted on several changes to the IFSC statues, including a modification for electoral procedure within the IFSC. Member Federations then went on to vote on a series of Membership issues, fulfilling their oversight role in ratifying new and changed membership statuses. With the ratification of the Fiji Mountaineering and Climbing Association as IFSC Continental Member, the number of IFSC Member Federations reached a new total of 91.

Member Federations received a thorough de-brief of the current state of IFSC Finances from IFSC Vice-President Treasurer and Finances Pierre-Henri Paillasson and Administration Director Francesca Jengo, and provided approval for the 2019 budget. Representatives from the IFSC Sport Department Silvia Verdolini and Alessandro Di Cato then reviewed and previewed the events of 2018 to 2021. The Board looked for approval for the mandate to search for a Host City for the 2020 Youth World Championships with the possibility of proposing a different event format, as well as confirming the 2021 World Championships Host City following a vote in Moscow, Russia. The Plenary Assembly also considered the Olympic Qualifying events and discussed preparation for the Olympic Games Tokyo 2020.

Marketing and Communications Director Anne Fuynel provided attendees with and additional review of 2018 and presented the key areas of focus from a marketing perspective. She introduced the contract with Synca and Dentsu, gave an overview of Sponsorship and TV developments, and presented a model for sustainable events beyond 2019.

This comprehensive review of actions of the IFSC were followed by the reports of activities at a local level and at the level of IFSC Commissions. President Scolaris outlined the work of Professor Marc Le Menestral, Director of the Ethics Commission, and Athlete Representative on the IFSC Executive Board Sean McColl presented the work of the IFSC Athletes Commission before a vote was held and the IOC Athletes' Rights and Responsibilities Declaration was endorsed.. Member Federations approved the addition of a female Athlete Representative to the Executive Board, who will be elected during the IFSC World Championships in Hachioji, Japan, later this year. Statutes were amended accordingly to include both one male and one female Athlete Representative on the Board. The Disciplinary and Appeals Commission looked to the National Federations to confirm Ian Fullagar (AUS) as a new member and presented their annual report. In addition, Dr Eugen Burtscher offered an overview of the work of the Medical Commission and how the IFSC aims to protect the health and wellbeing of its Athletes. An update from the Anti-Doping Commission was also provided, outlining the number of Anti-Doping tests completed in 2018.

Finally, the Assembly concluded by confirming the upcoming Plenary Assemblies in 2020 and 2021, which will take place in Limassol, Cyprus and Paris, France retrospectively.

The conference touched upon a wide variety of topics, beginning with a celebration of Sport Climbing Athletes from Japan in the 2018 season. Japanese Athletes have demonstrated their strength, particularly at the Youth Olympic Games Buenos Aires 2018, where Keita Dohi and Shuta Tanaka claimed the top two spots on the men’s Podium. Adult Athletes have also been highly successful in the past years, especially in the Discipline of Boulder. Mrs Miho Nonaka shared her views on the past seasons and highlighted the team’s ambitions in the 2019 World Championships and 2020 Olympic Games which both take part in their home country.

IFSC Vice-President Sport/Events Kobinata Toru outlined the Olympic Qualification System, with further comment from Head of Olympic Coordination Jérôme Meyer, who confirmed that the Tokyo 2020 test event will take place in March 2020. Mayor of Hachioji Mr Takayuki Ishimori and JMSCA Vice-President Mr Yuji Hirayama explained the appeal of Hachioji for the Host City of the 2019 World Championships and commented about their delight at the opportunity to host the event.

Much of the Press Conference looked forward to these two events which represent milestones for the JMSCA and our sport. The World Championships, held in August this year, are set to be the first qualification event for the Tokyo Olympic Games next year. The JMSCA has worked in close collaboration with the IFSC and the Tokyo 2020 Olympic Organising Committee, and anticipation for both events is high. However, the JMSCA will also be providing the final World Cup event of the 2019 Lead and Speed season. With season titles on the line, the Inzai Lead and Speed World Cup, to be held at the end of October, should not be missed.

IFSC President Marco Scolaris also announced formal decisions made at the Plenary Assembly earlier in the day, before commenting on the Japanese team’s status as an ambassador for both the culture and lifestyle in Japan, applauding the team for their unity and stating that the IFSC is grateful for their support.

The evening continued with a gala dinner, to which all Member Federations and representatives were invited. A formal conclusion of the day’s proceedings, the dinner was a final chance for the attendees to spend time together and experience Japanese culture and cuisine. The dinner took place at Gonpachi, a restaurant specialising in the Japanese delicacies Soba, Kushiyaki and Izakaya. With Tokyo’s Rainbow Bridge winking through the restaurant windows, it was the perfect farewell to the city following a busy week of meetings, workshops and key decisions concerning the future of Sport Climbing.

Thank you to the JMSCA and President Mr Kuniaki Yagihara for organising a special week of events, in the city which will host the Olympic debut of our sport in less than 500 days at the Olympic Games Tokyo 2020.

The Tokyo skyline, including the famous Rainbow Bridge as seen from the Gala Dinner restaurant.