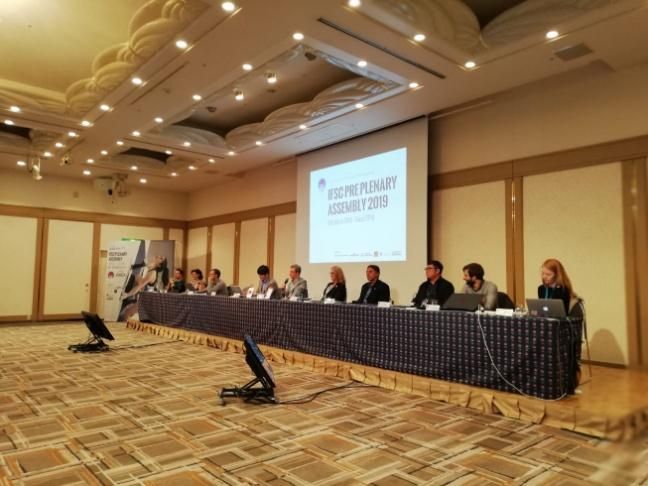 Final Preparatory Meetings Ahead of the 2019 Plenary Assembly

On the eve of the 14th Annual IFSC Plenary Assembly, all parties completed final preparations to ensure the smooth running of tomorrow’s main event.

IFSC President Marco Maria Scolaris and Head of Olympic Coordination Jérôme Meyer were joined by Japanese media Kyodo News and Nikkei Asian Review for a series of interviews around Sport Climbing in the Olympic Games. President Scolaris announced that the IFSC now feels at home in Japan ahead of the Olympic Games Tokyo 2020, and Mr Meyer outlined the current status of Sport Climbing and Paris 2024.

The Executive Board continued Thursday’s meeting, touching on further subjects relating to the 2019 and 2020 season and the broader development of our sport.

Finally, IFSC Member Federations registered for the Pre-Plenary Assembly and gathered to give several larger topics a preliminary hearing. In the one-and-a-half-hour meeting, key areas were presented for consideration and deliberation ahead of tomorrow’s Plenary Assembly. After a welcome from President Scolaris, Paraclimbing Development Officer Daniel Torchia presented a report of his research into Paraclimbing. Following this, Executive Director of Synca Creations Bae Soojun and Shingo Shibuya, Dentsu Inc. Senior Director, with whom the IFSC signed its latest deal, gave an overview of the agencies’ sports marketing backgrounds, on top of offering insight into a vision of how to increase the value of Sport Climbing by developing the visibility and revenue of events. It was followed by a speech by Pierre-Henri Paillasson, IFSC Vice-President & Treasurer, on how the Synca/Dentsu agreement will support IFSC current and future developments.

As a ceremonial start to tomorrow’s Plenary Assembly, the day concluded with an opening ceremony dinner at the restaurant Hokkaido Shinagawa. The dinner was also a chance for the guests to experience and enjoy local cuisine, discuss what they had heard in the pre-PA and prepare for a full day of proceedings in tomorrow’s main event.