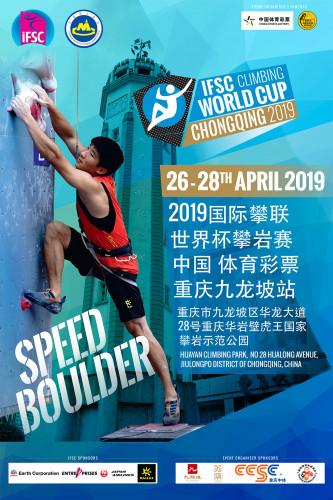 The Speed and Bouldering climbing season continued this weekend in Chongqing, the first stop on the 2019 China Tour. With 4 Japanese in the bouldering finals and a new World Record set by China’s YiLing SONG, the Asian climbers demonstrated their home field advantage.

The only thing hotter than the temperature in Chongqing this weekend was the swiftness of the speed climbers. Closing out an incredible speed competition in this year’s 2019 Chongqing World Cup, we were lucky enough to see world class performances from both the men and women.

QiXin ZHONG (CHN) made quick work of his opponents with almost flawless performances with times all below 6 seconds but failed to outperform Kostiantyn PAVLENKO (UKR) in the ½ finals as their almost perfectly synchronized choreography up the wall turned out only a 0.022 second difference advancing PAVLENKO to the next round. Unfortunately, his momentum was halted in the big finals by the extremely nimble Alfian MUHAMMAD (INA) leaving PAVLENKO with Silver and crowning MUHAMMAD as the 2019 Chongqing World Cup Speed Climbing Champion. ZHONG had a fighting chance for the bronze in the small finals, but after going head to head with Sergey RUKIN (RUS) fell prey to the pressure and humidity, slipping more than once and ultimately falling off the wall handing over the bronze medal to RUKIN.

What an evening it was for the women, putting numbers on the board that have never been seen in IFSC speed climbing competition history. Even qualifying for the final rounds had all 16 girls climbing comfortably under the 9 second mark. The ¼ finals gave us a real treat as YiLing SONG (CHN) exploded from the starting gate, quickly leaving Natalia KALUCKA (POL) in the dust while executing unprecedented speed and agility and setting a new women’s speed climbing world record of 7.101 seconds. She followed this up in the ½ finals against Anouck JAUBERT (the previous world record holder) with a time of 7.11 seconds, which was still faster than the previous world record of 7.32. Although losing the match, JAUBERT still finished with a time of 7.321 almost matching her old world record time. SONG continued this momentum and concentration finishing with her second consecutive gold medal this season and leaving Aleksandra RUDZINSKA (POL) with the silver medal. The battle for the bronze was a bit difficult for JAUBERT to swallow as she competed with one of her biggest rivals, Luliia KAPLINA. As the buzzer sounded both girls took off, but KAPLINA quickly lost her footing, which created some distance behind JAUBERT. This distance didn’t last long as France’s JAUBERT couldn’t quite keep it together through the middle section, finally slipping on the very last foothold and falling, giving plenty of time for KAPLINA to catch up and finish in 3rd place.

Without the competition of the 2 previous gold medalists in the Finals (ONDRA was sick and KRUDER failed to qualify for the semis), the outcome was entirely uncertain. Finishing at the top was the French Climber Manuel CORNU who took this opportunity to climb onto the podium for the first time in an IFSC World Cup, winning his first gold medal. With time enough for only one more attempt to reach the zone on M3, Tomoa NARASAKI (JPN) succeeded winning his second silver medal this year. Anze PEHARC (SLO) finished with a personal best this season and a place on the podium with a bronze medal. With only 3 tops, Sascha LEHMANN (SUI), Aleksey RUBTSOV (RUS) and Kokoro FUJII (JPN) didn’t reach the podium but ranked honorably at 4, 5 and 6 respectively.

With very challenging and impressive boulders, the women’s finals had some of the most difficult problems that we have seen this year. Unfortunately for Katja KADIC (SLO), all four problems were too hard for her to be topped. The young Japanese Futaba ITO (JPN) achieved to top the first boulder as Petra KLINGLER (SUI) topped the third one. Unfortunately with only 2 Zones, the Japanese ranked 5th while the Swiss climber finished at the foot of the podium with a 4th place finish. The Austrian climbing machine, Jessica PILZ, demonstrated that after winning everything in LEAD, she is ready for BOULDERING! With 3 Tops she jumped, for the first time, onto a boulder podium with the bronze medal. For the Gold medal, the very impressive battle took place between the Japanese Akiyo NOGUSHI and the Slovenian Janja GARNBRET. After both flashed the first boulder, Akiyo took the lead of the competition with just one less attempt to reach W2 zone than Janja. But Janja wasn’t finished and regained the lead with a flash on M3 and only needed two attempts to solve the forth problem, whereas Akiyo needed 2 attempts for W3 and 5 for the last boulder leaving her with the silver medal.

With 3 consecutive Gold Medals this season, we can begin to ask ourselves if anyone will be able to stop Janja GARNBRET, who has already begun to take a strong lead in the 2019 Overall Rankings.