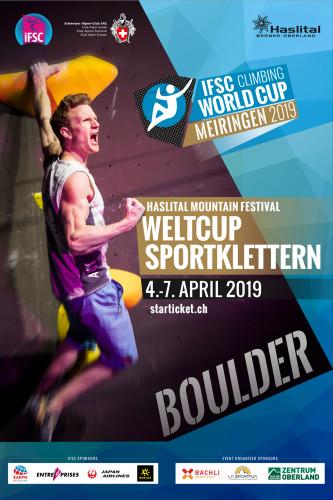 For the fourth time in IFSC history the World Cup season started in Meiringen with a great show on a brand new climbing wall equiped with custom holds just for the competition. Problems were as creative as they were difficult, but were met by athletes ready for the challenge. In the men’s Final, dominated by Asian climbers, Adam ONDRA demonstrated his readiness for the Pre-Olympics season. Janja GARNBRET also looked incredibly strong by solving all the problems but one!

Meiringen may have provided us some winter snow, but the temperature inside the venue was turned up thanks to the performance of the athletes and a sold out audience!

As Meiringen’s returning 2018 Bouldering Champion, Jernej KRUDER missed the Finals this year leaving room for Tomoa NARASAKI and Adam ONDRA to fight it out for gold.
Once again, the Japanese team demonstrated its preparation and discipline placing 4 athletes in the Finals.

If the fist boulder was a formality (except for Kokoro FUJI who missed it) with 5 Tops, problem 2 was another story all together shutting down both Jongwon CHON and Tomoaki TAKATA who didn’t even achieve to reach the ZONE.

M3 kept all the climbers grounded, but Tomoa NARASAKI and Adam ONDRA who flashed it taking control of the Final.

The last problem decided the winner. As Tomoa NARASAKI failed to reach the Zone, Adam ONDRA flew up problem 4 flashing it.

Thanks to his performances on the first two boulders the Japanese climber, Rei SUGIMOTO took the first bronze medal of the season.

Women are so strong

Even if the 2018 Bouldering Champion, Miho NONAKA was not here in Switzerland, Japan was well represented with their female athletes such as Akiyo NOGUCHI, who was tied at 1st place entering the finals. Then her strong experience helped her to find 3 tops out of 4 in the Finals and secured her Silver medal.

After several injuries, the British climber, Shauna COXSEY is back to the top showing that she is still in the game. With 2 Tops including a flash she jumped back on the podium with a third place finish for the first time since the IFSC World Cup Munich 2017.

Very impressive in Semis, the French athlete, Fanny GIBERT, failed to perform well in Finals with only one Top and one Zone. She ranked 4th.

At home, even with the support of the public cheering her on, Petra KLINGLER only topped one problem and have to settle for 5th place.

The Women’s Final saw seasoned climbers joined by the Next Generation with 13 years separating the oldest climber from the rookie, Oceania MACKENZIE. For her second time in an IFSC World Cup, the Australian demonstrated some strong capabilities with a Top in only two attempts. She took the 6th place.

In 2018, Janja GARNBRET (SLO) won almost everything in Lead. In 2019, it’s clear that she has trained very hard in Bouldering, dominating the first 2019 Boulder World Cup with 4 Tops in 5 attempts in Semis and 3 Tops in Finals. She really deserved her Gold medal.