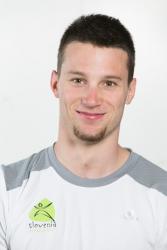 When you started competing in international competitions, did you see yourself being in the top-10?
I started competing in 2008 and I knew that I could beat the best ones since I was competing at international youth events (2004)
What motivated you to compete rather than just to climb outside?
It's not all about climbing here...I like to compete because there are so many different factors like time and nervousness.
What are some struggles you face as an athlete?
If you're good after qualifications or semis, then you start later to the next round.
What influenced you to start competing?
Just good feeling of success.
Who most helped you get to where you are right now?
Parents. They've been my sponsors in everything.
What advice could you give to Young Athletes?
Enjoy competitions and compete only with yourself.

Hobbies
Longboard. And just bought an enduro bike. Hope I'll like it